The New Wing a Decade Later

Celebrate the 10th anniversary of the New Wing! Read on to discover the decisions, strategy, and history of the museum’s beautiful addition.

In January 2012, the Gardner Museum welcomed audiences to commemorate the opening of the Museum’s New Wing. The New Wing was designed by Italian architect Renzo Piano and his Renzo Piano Building Workshop based in Genoa. The Pritzer Architecture Prize winner came to international significance with his early collaboration on the Centre Pompidou in Paris (1971-77) and has completed a dozen notable commissions for museum buildings in North America over the past four decades.

For many architects, Piano’s Gardner Museum wing is among the best of his recent projects. The addition added over 70,000 square feet to the existing Fenway Court (as the Museum was known during Isabella’s lifetime). The expansion preserved the existing historic building while revitalizing the Museum for new visitor experiences, programs, and exhibitions.

In 1898, Isabella purchased land on the newly constructed Back Bay Fens, which was designed by landscape architect Frederick Law Olmsted. Fenway Court was then designed by architect Willard T. Sears and built between 1898 and 1901. Gardner opened her Venetian-inspired palace for the arts to the public in 1903. A century later, the Museum was confronted with the challenge of conserving and maintaining the structural integrity of Fenway Court, which was straining under increasing demands. Not wanting to reduce public programming and access, Museum leadership decided to build a new addition to accommodate 21st-century needs. In choosing this strategic direction, the Museum embarked on a decade-long building project that transformed the institution while contributing substantially to Boston’s notable architectural history.

After a four-year design process, construction of the addition began in 2009, culminating in the grand reopening in 2012. The program for the New Wing included the addition of a new entryway, special exhibition gallery, concert hall, apartments for visiting artists, on-site greenhouses, and a range of support spaces for conservation, maintenance, and administration.

The building is organized into four large copper-clad spaces floating over a transparent glass-enclosed ground floor. This transparent opening to the Museum on Evans Way Park presented a stark contrast to the cloistered enclosure of the original Fenway Court. 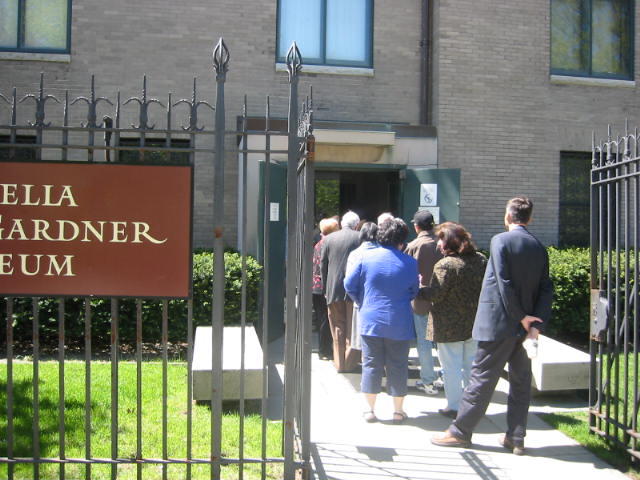 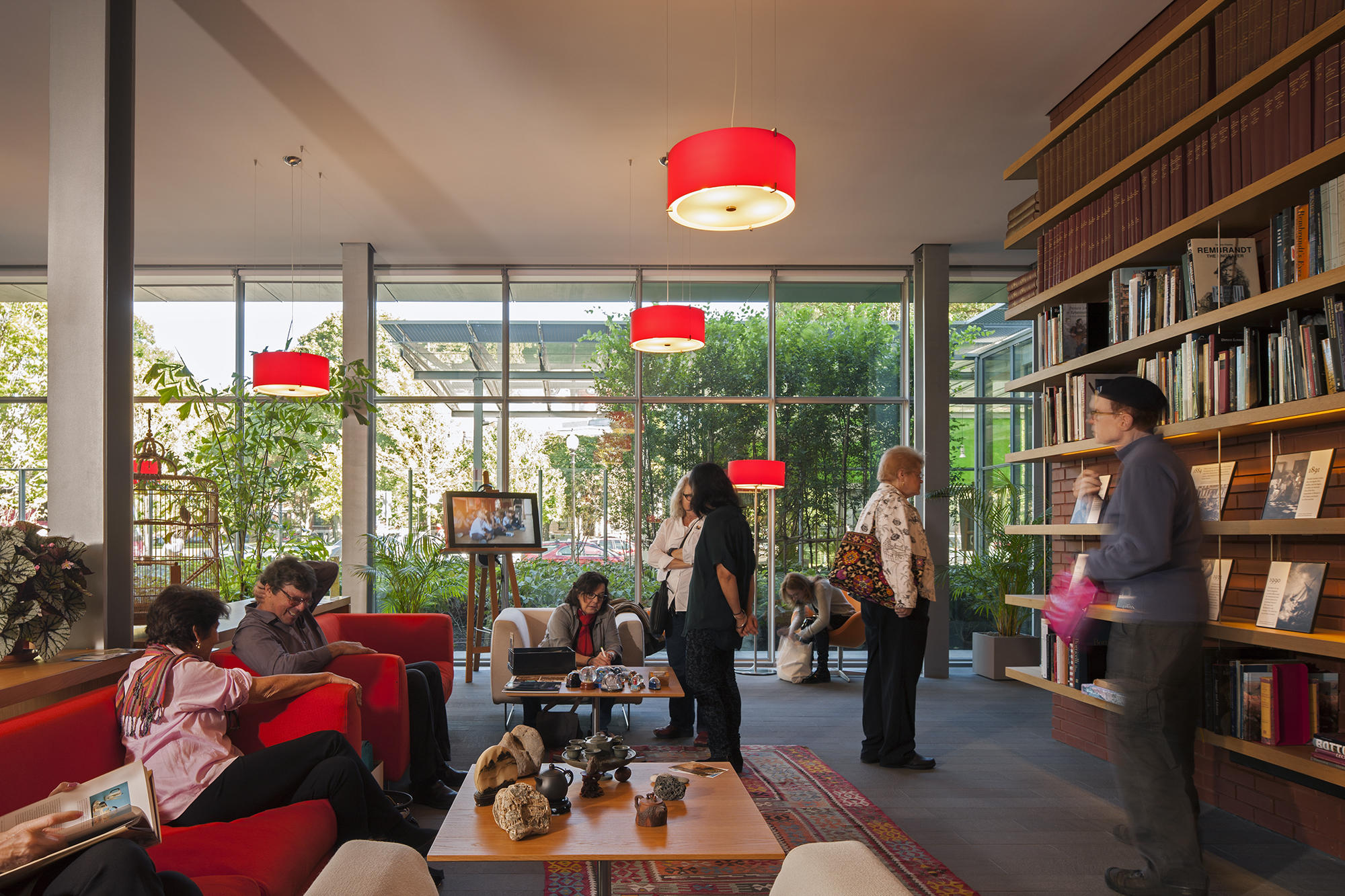 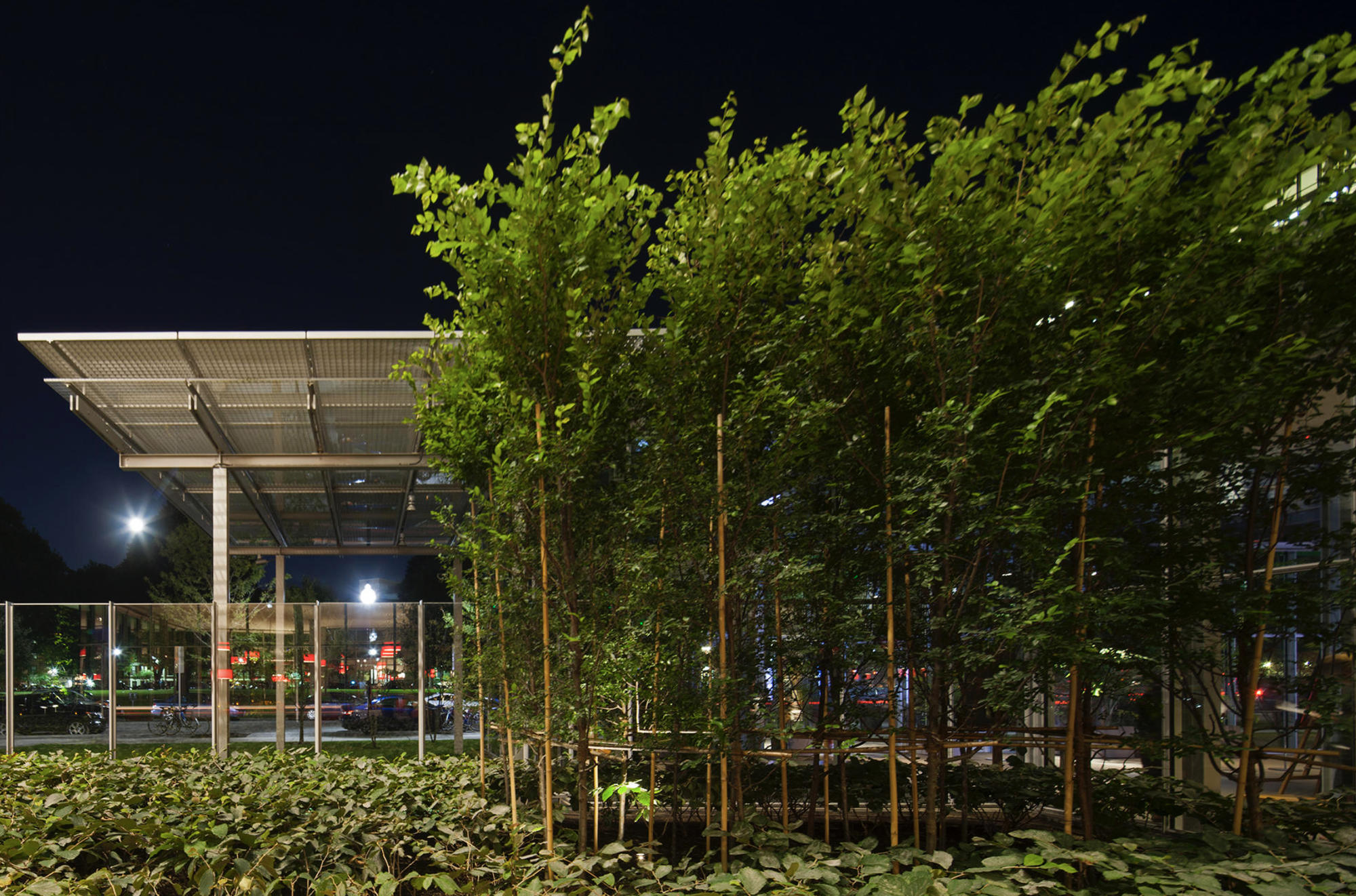 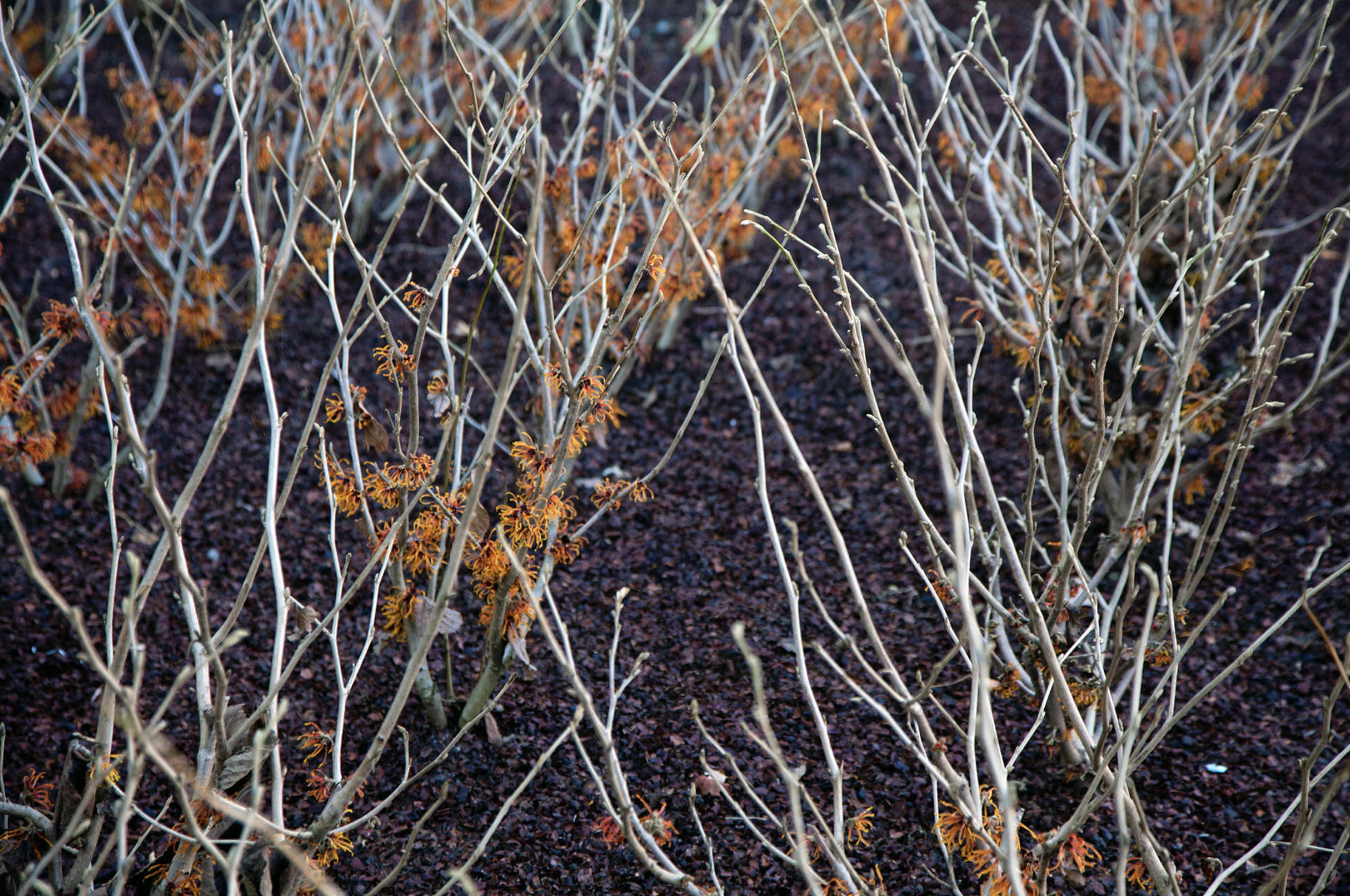 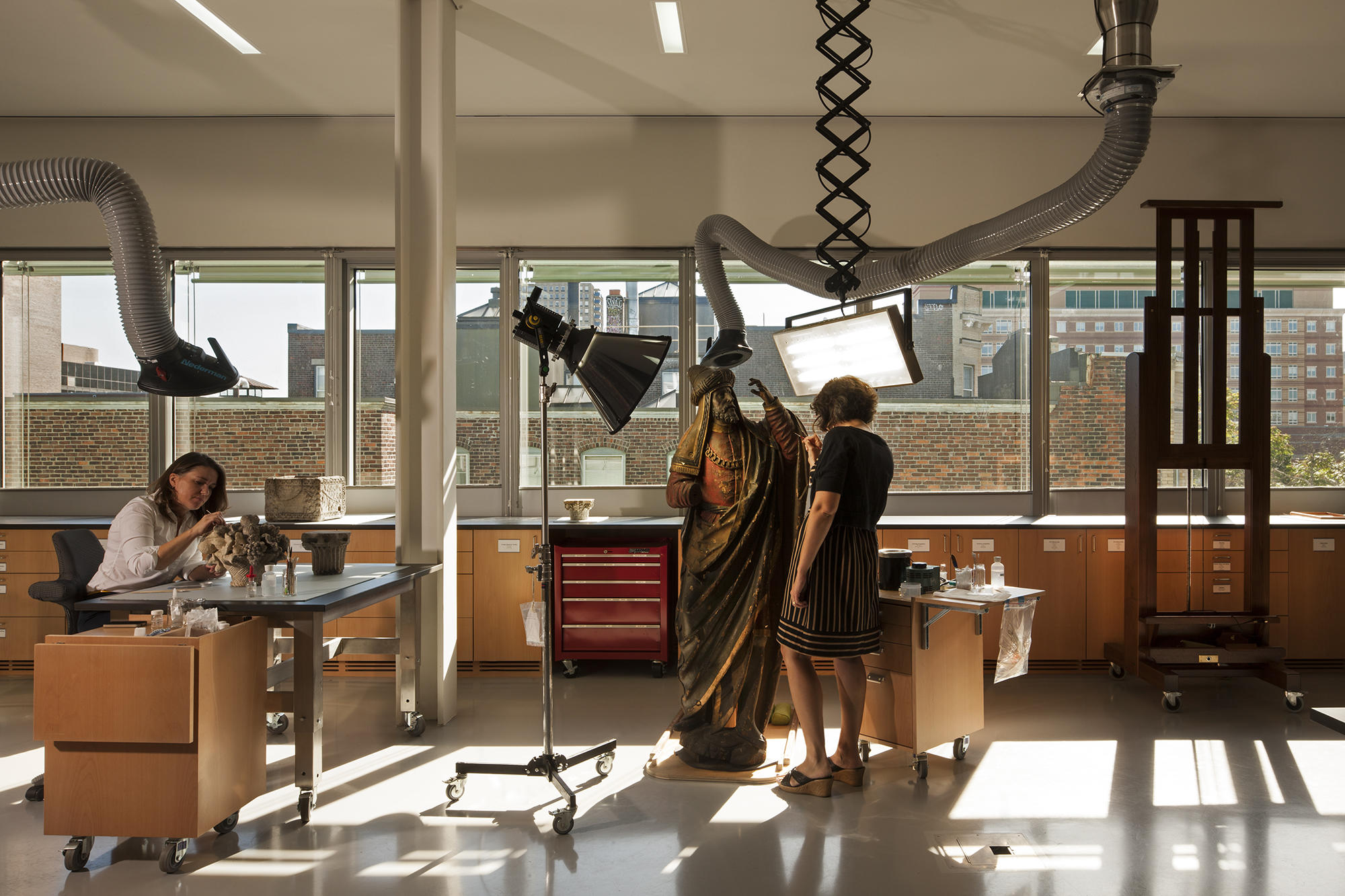 Hostetter Gallery is an especially flexible space for presenting exhibitions from both the historic collection as well as contemporary art. Among Piano’s innovations here was the installation of a unique adjustable height ceiling system. The ceiling can be lowered to 12 feet for more intimately scaled works, raised to 24 feet for larger works, or opened altogether to a skylit 36-foot high white cube. The gallery offers the option of opening a large north-facing curtain wall view of Fenway Court and the rare pleasure of viewing art in natural light, or closing it to preserve the precious collections on view from that natural light. Over the past decade, Hostetter Gallery has hosted an extraordinary range of materials and formats over some two dozen exhibitions.

Opposite the gallery, visitors enter the extraordinary Calderwood Hall. Considered by many to be among the best new spaces in the city of Boston over the past decade, Calderwood Hall was a collaboration between Piano, internationally acclaimed acoustician Yasuhisa Toyota of Nagata Acoustics, and former Gardner music curator Scott Nickrenz. The performance space features a square stage in the round flanked by a single row of seats ringed around on three balconies above. This solution was inspired by Italian chamber music halls, and allowed the vast majority of the Hall's nearly 300 seats to be in the front row for hundreds of concerts, performances, and events.

Over the past decade of the New Wing, the Gardner Museum has renewed its commitments to conserving its extraordinary collection while preserving Gardner’s Fenway Court. Catalyzed by the ambitious architectural project of the New Wing, it has expanded its programming and welcomed new audiences from near and far. The project has garnered a unique combination of both popular and professional praise locally and nationally. Based on the successful completion of the New Wing, the renewed and expanded Museum was designated a Boston Landmark by the Boston Landmarks Commission. In 2015 Boston Society of Architects awarded the project their highest honor, the Harleston Parker Medal. The Parker Medal was established a century ago in recognition of “the most beautiful piece of architecture” realized in the city in the past decade.

Come celebrate ten years of the New Wing with us, and check out the Zanele Muholi exhibition while you’re here!

The Isabella Stewart Gardner Museum resides on the homelands of the Massachusett Tribe, who belong to this place and continue to regard these lands and waters as sacred.