Chrysanthemum Impressions: A Spotlight on our Beautiful Blooms

With the approach of fall comes the bloom of the Courtyard’s beautiful chrysanthemums. Read on to discover the long, fabled history of the flower that delights visitors every autumn.

In the fall of 1911, the author Henry James wrote to his friend Isabella Stewart Gardner:

An autumn gale is blowing & spattering about me here as I write and the wind sounds like great guns in my old chimneys. But my lawn is as lustrous as your finest emerald… & I have just been out to look at the private chrysanthemum show in my greenhouse—sighing with baffled pride that it can't be public.

Just as they did a hundred years ago, chrysanthemums continue to enchant gardeners each autumn. The return of the “mums,” as they are often called, to the Isabella Stewart Gardner Museum’s Courtyard is a celebrated event every year. Familiar to gardeners and flower enthusiasts around the world, the chrysanthemum has a rich and winding history.

The flower’s origin story is shrouded in legend, often with a theme of immortality. Native to East Asia and northeastern Europe, this flowering herb—believed to hold the power of life—has been cultivated for medicine in China for over three thousand years. So admired for its refined beauty, the chrysanthemum was elevated to represent autumn as one of the Four Gentlemen plants—Confucian “Junzi”—of Chinese art, and for a time, only the nobility were permitted to grow them.

From China, migrating Buddhist monks are said to have brought the chrysanthemum to Japan as early as the 5th century. Like the Chinese, the Japanese have long associated the chrysanthemum, or “kiku,” with longevity, nobility, and perfection. The orderly unfolding of its petals is said to symbolize the sun and placing a single petal in the bottom of a glass became a tradition to sustain a long, vigorous life.

Japan’s National Chrysanthemum Day is held in early fall. Called the Festival of Happiness, this observance and many other autumn celebrations are dedicated to the art of Japanese chrysanthemum pruning techniques. Methods of training mums in traditional Japanese forms include bonsai, kengai (“cascade”), ozukuri (“thousand bloom”), and ogiku (“single stem”). With months of prudent pinching and disbudding throughout the growing season, the ogiku technique will produce one colossal blossom atop a single stem over four feet tall.

The team of horticulturists at the Isabella Stewart Gardner Museum is one of the few in the United States trained in the distinctive style of ogiku, and the single stem mums are the stars of the Museum’s autumn horticultural show. Dozens of varieties of heirloom chrysanthemums fill the Courtyard with Seussian forms and a kaleidoscope of colors.

First classified in Europe in the 17th century, the genus Chrysanthemum was named by Swedish botanist Carl Linnaeus by merging the Greek works “chrysos” (gold) and “anthemon” (flower). Emblematic of death in a number of European countries, the mum is used exclusively for funerals and on graves to honor the dead and comfort those in mourning.

In 1798, inventor Colonel John Stevens III imported the first mum to the United States from England as part of his efforts to enhance the landscape of Elysian Fields in Hoboken, New Jersey. Named ‘Dark Purple,’ this cultivated variety (or cultivar) was most likely a descendant of the larger flowered species, Chrysanthemum morifolium. From this and the wild species, C. indicum, tens of thousands of cultivars and hybrids have since been developed. The diversity of varieties includes blooms of thirteen different forms in every color but blue.

The popularity of chrysanthemums increased in late 19th century America, and Isabella Stewart Gardner and her father-in-law John L. Gardner Sr. grew them in the greenhouses at Green Hill, the Gardners’ residence in Brookline, Massachusetts. In 1884, they won several prizes from the Massachusetts Horticultural Society at their annual Chrysanthemum Show, including first place for six “Large Flowered” specimens and six “Japanese” specimens. 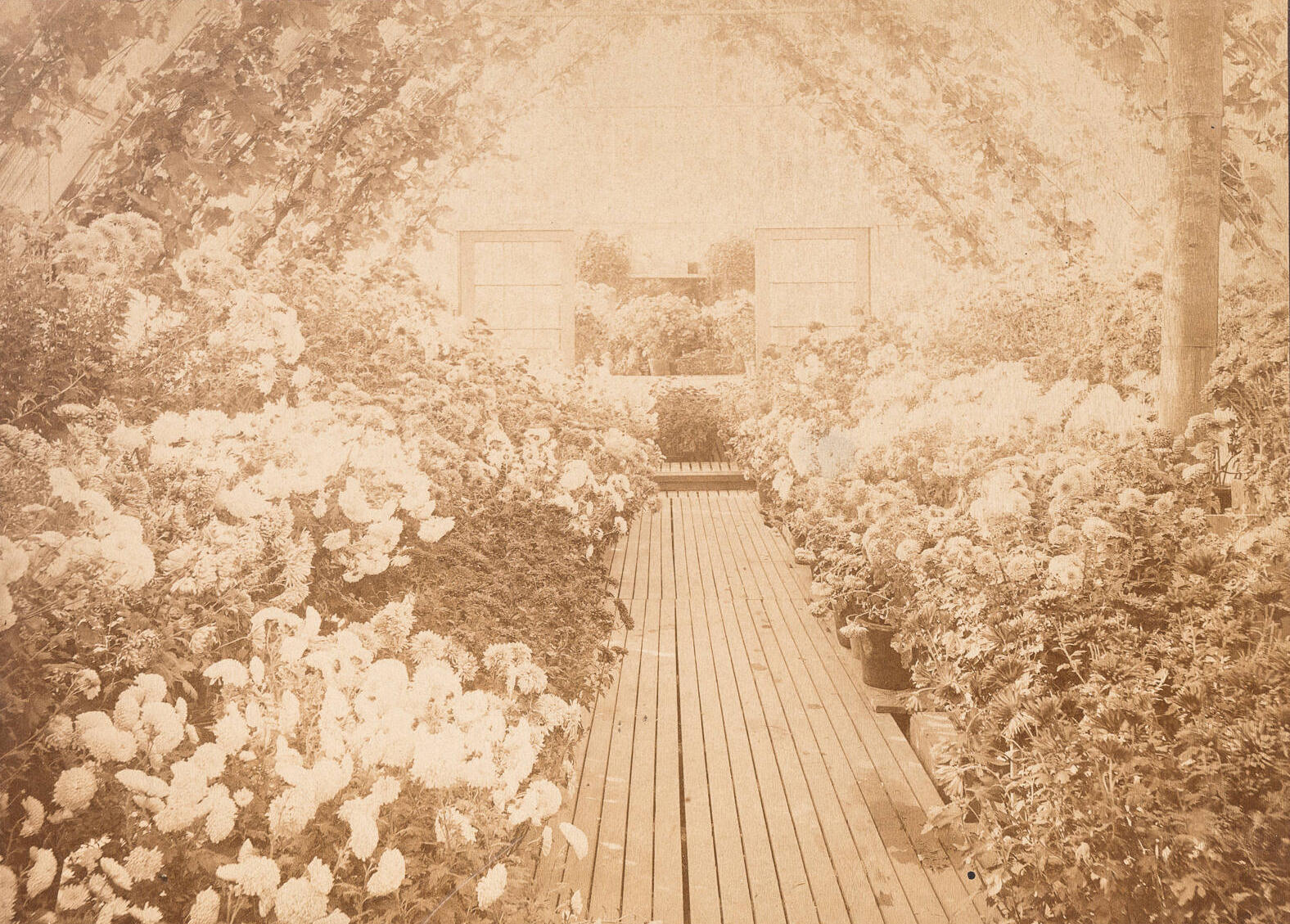 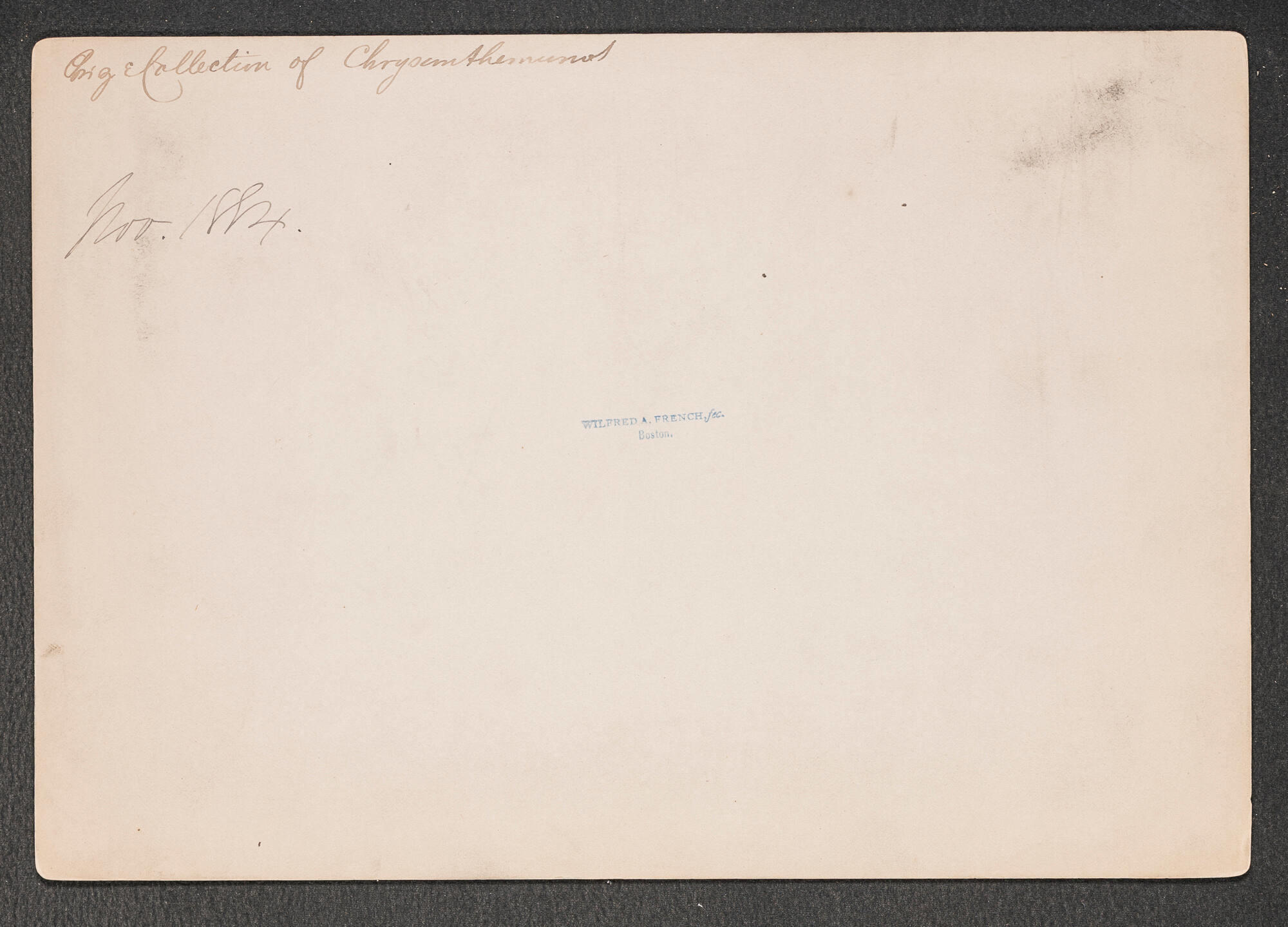 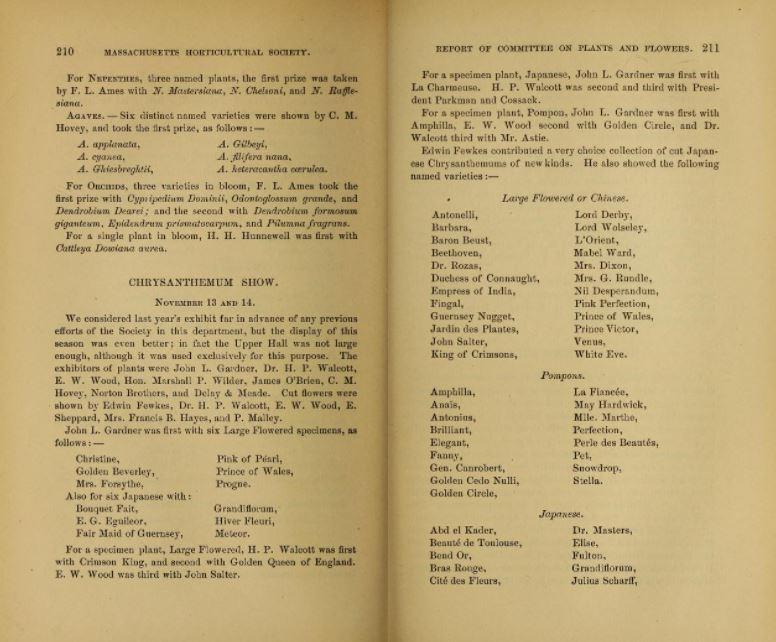 Transactions of the Massachusetts Horticultural Society for the Year 1884, pp. 210-11, showing the Chrysanthemum show
Accessed on Archive.org

Four years later, Isabella's friend, painter Dennis Miller Bunker, was inspired by her impressive collection of brightly colored blooms. Recently returned from a summer in England where he studied Impressionism in the style of Claude Monet, Bunker practiced his newly adopted technique of broken brushstrokes on the fantastic variety of chrysanthemums. This fine example of American Impressionism can be admired in the Museum’s Blue Room.

The chrysanthemums are on view in the Courtyard every October and November, where they continue to delight visitors and inspire artists. This glorious display is now known as the John Lowell Gardner Chrysanthemum Installation in memory of John Lowell Gardner, great nephew of Isabella and a museum leader for many decades.