Isabella—much like many young women today and of her time—was drawn to peonies. Read more about her love of these flowers and many others!

Isabella Stewart Gardner enshrined her love of gardens at the heart of the Museum with a lush, plant-filled Courtyard. Despite the prominence of living flowers in the galleries—like the violets she kept in front of a painting in the Titian Room—there are only two floral still life paintings in the collection: both are pictures of peonies and hang in the Macknight Room, one of which hangs over her desk. 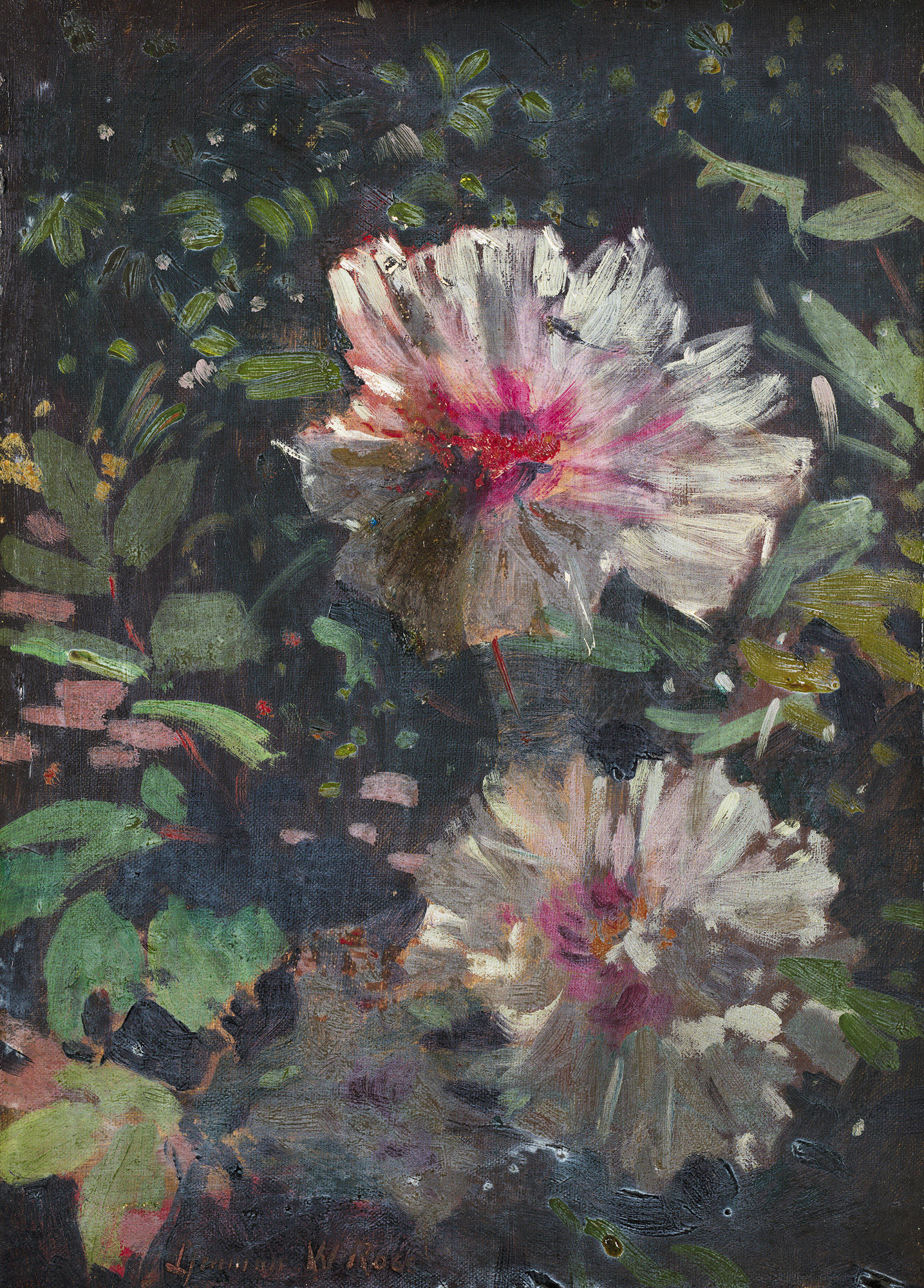 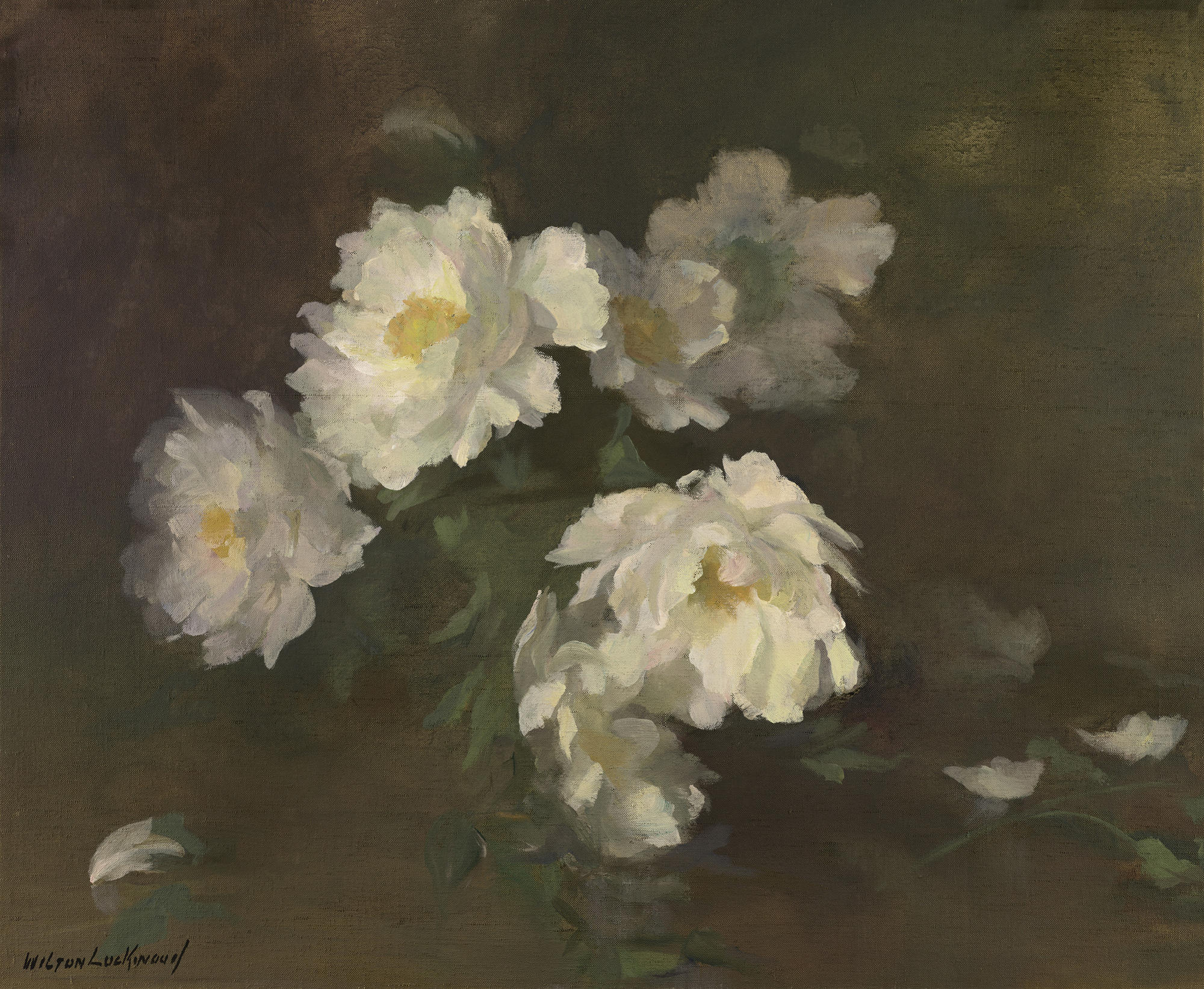 A common decorative motif across cultures, peonies are also depicted on many objects in the collection, including a Persian tombstone, a Chinese coat, and a Japanese clock. Even if violets were Isabella’s favorite flower, peonies must have been a close runner-up.

I am well and living the quiet summer life of Boston. Flowers come in—I am looking at two peonies now that were brought today… I am well as usual, and in the afternoon come down to the Macknight Room, which I fancy for a summer room, it being so low down it must be cool…

Isabella’s legendary reputation as an expert gardener, however, was on full display at Green Hill, her Brookline residence. The extensive gardens included peony beds and a magnificent greenhouse. 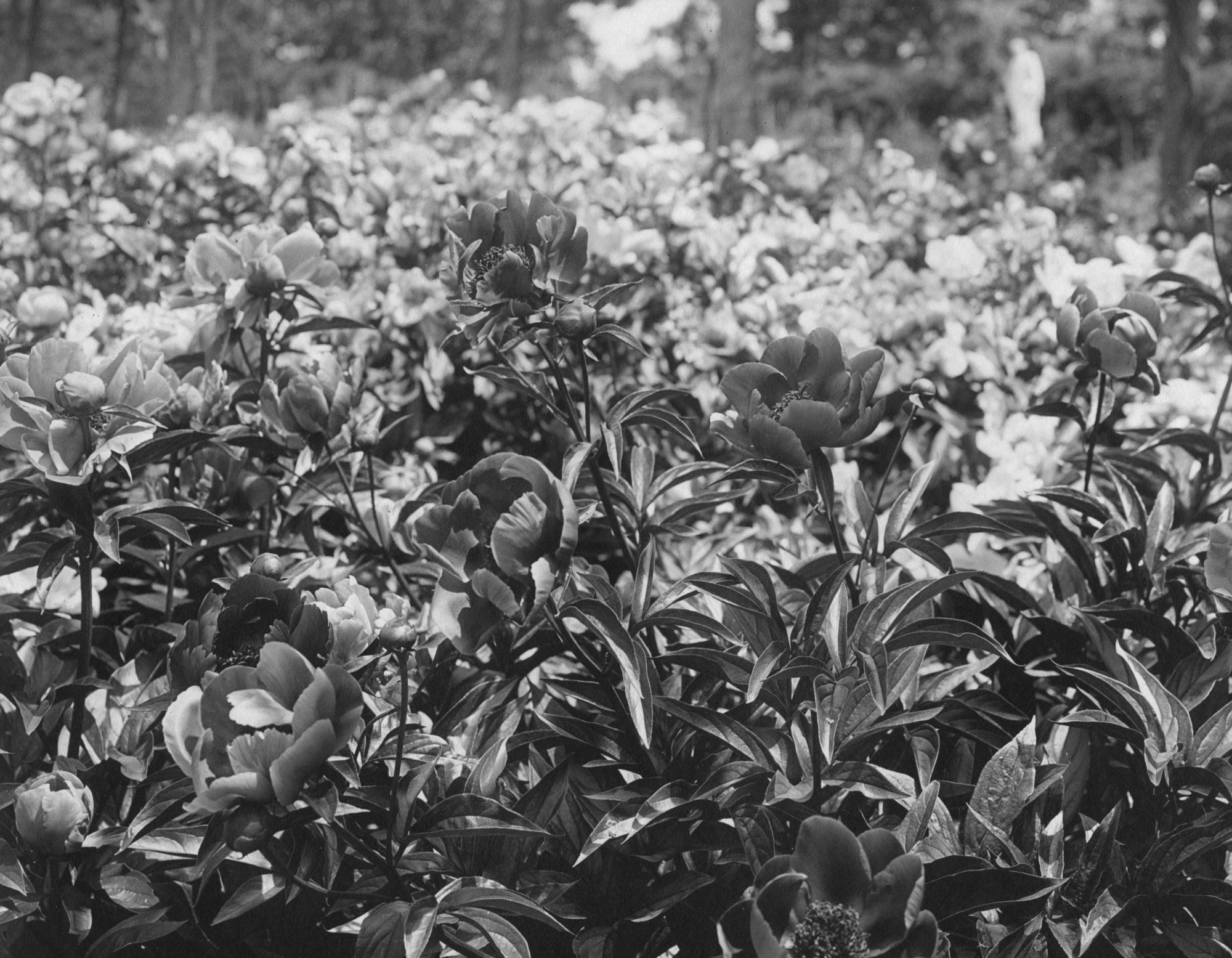 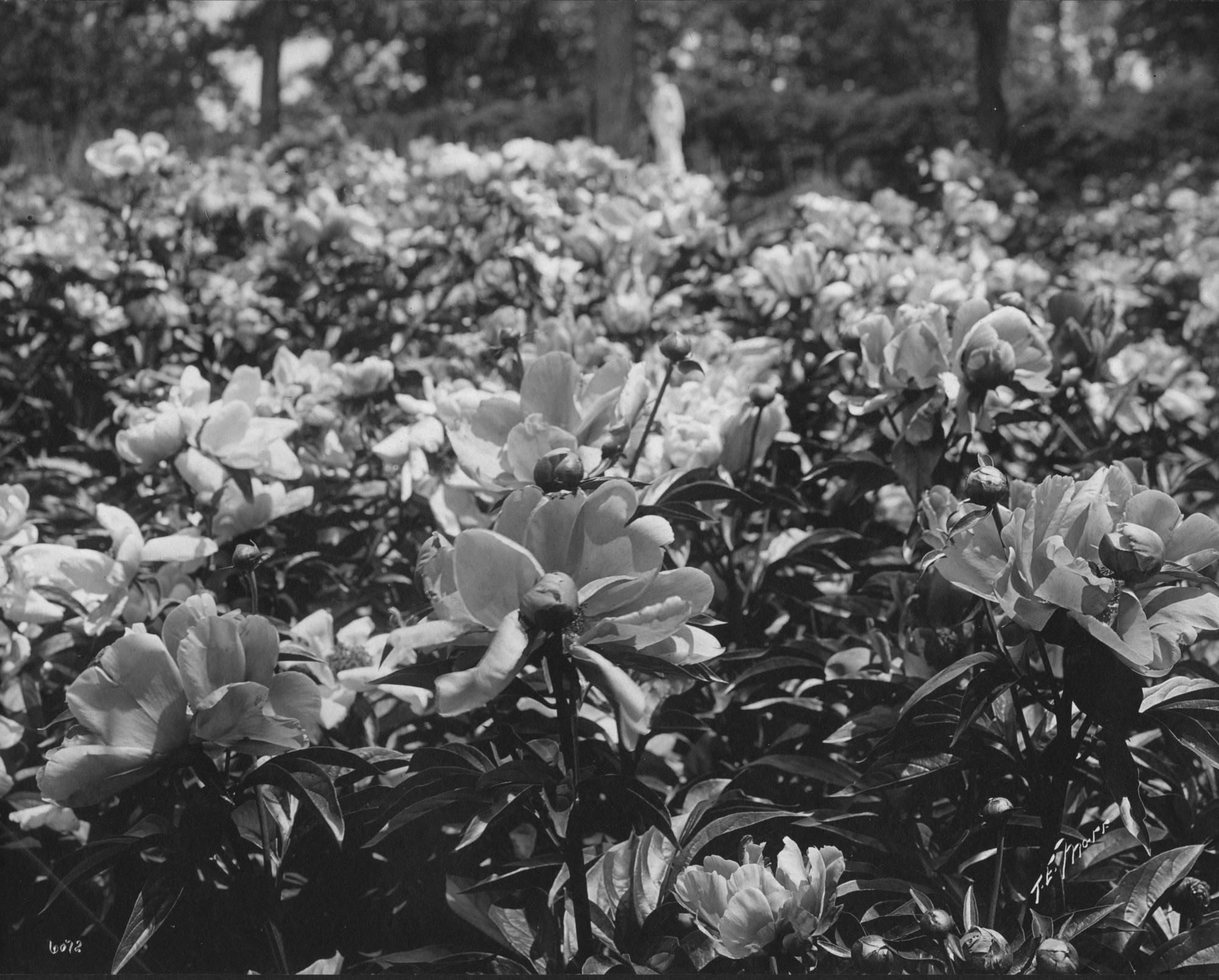 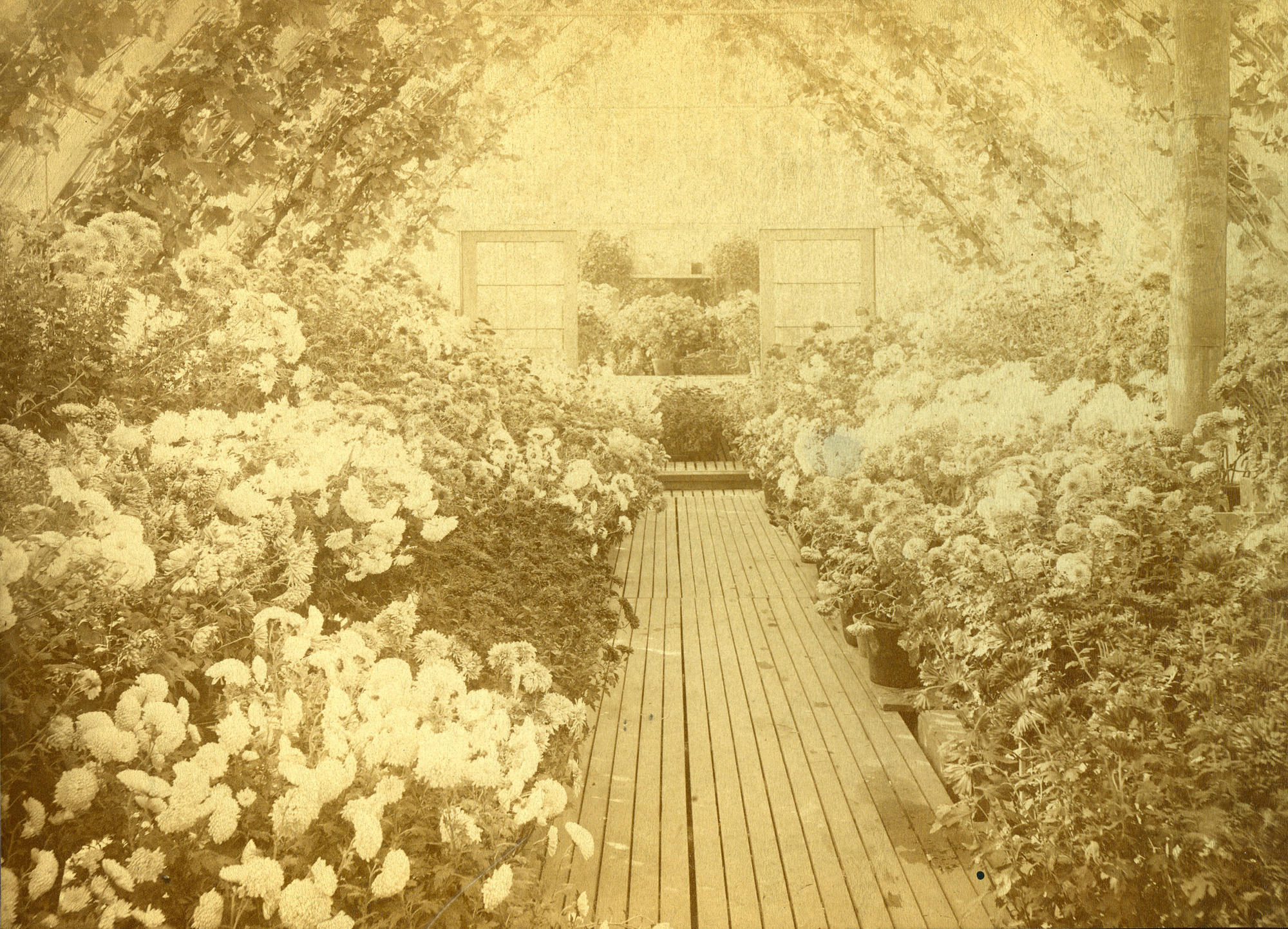 When her friend, the botanist and first director of Harvard University's Arnold Arboretum, Charles Sprague Sargent (1841–1927), couldn’t find a plant Isabella wanted, he wrote, “I am afraid that I can't do what I intended—send you a plant worthy of your reputation as an eminent horticulturist. (That I believe is what they are called) but this is not my fault, but yours (for being so confoundingly eminent)...”

Isabella regularly entered contests for horticultural excellence held by the Massachusetts Horticultural Society and often took home awards. Her half-peck of Brussels sprouts received first place in 1901, while her cucumbers came in second. She also did well with her flowering plants, including peonies. In 1904, she won a first prize of $10 for her "vase of [peony] blooms on long stems, arranged for effect."

Perhaps she took inspiration from a book she received as a gift from her friend Gretchen Osgood Warren (1868–1961) in 1900—The Floral Art of Japan—which introduced the Japanese art of ikebana, flower arrangement, to an English-speaking audience.

Gardner’s enthusiasm for peonies even informed the artists she patronized. Artist Wilton Lockwood cultivated peonies on Cape Cod, and his paintings of the flowers became his most popular subject. Isabella purchased one of them in 1914 at a Boston art gallery, and it was later exhibited at the Worcester Art Museum, along with 27 other Lockwood paintings (12 entitled Peonies).

In Massachusetts, peonies typically bloom in June. Thanks to this purchase, Isabella enjoyed peonies year-round—and now we can, too.

Read on about the Museum's landscape gardens, greenhouses, and more

Read More on Inside the Collection

Read about the famous portrait of Gretchen Osgood Warren and her daughter, Rachel, in the Museum's Gothic Room