Please note that the Courtyard displays are part of a living collection and as such the actual flowers may be different than what is described on our website. 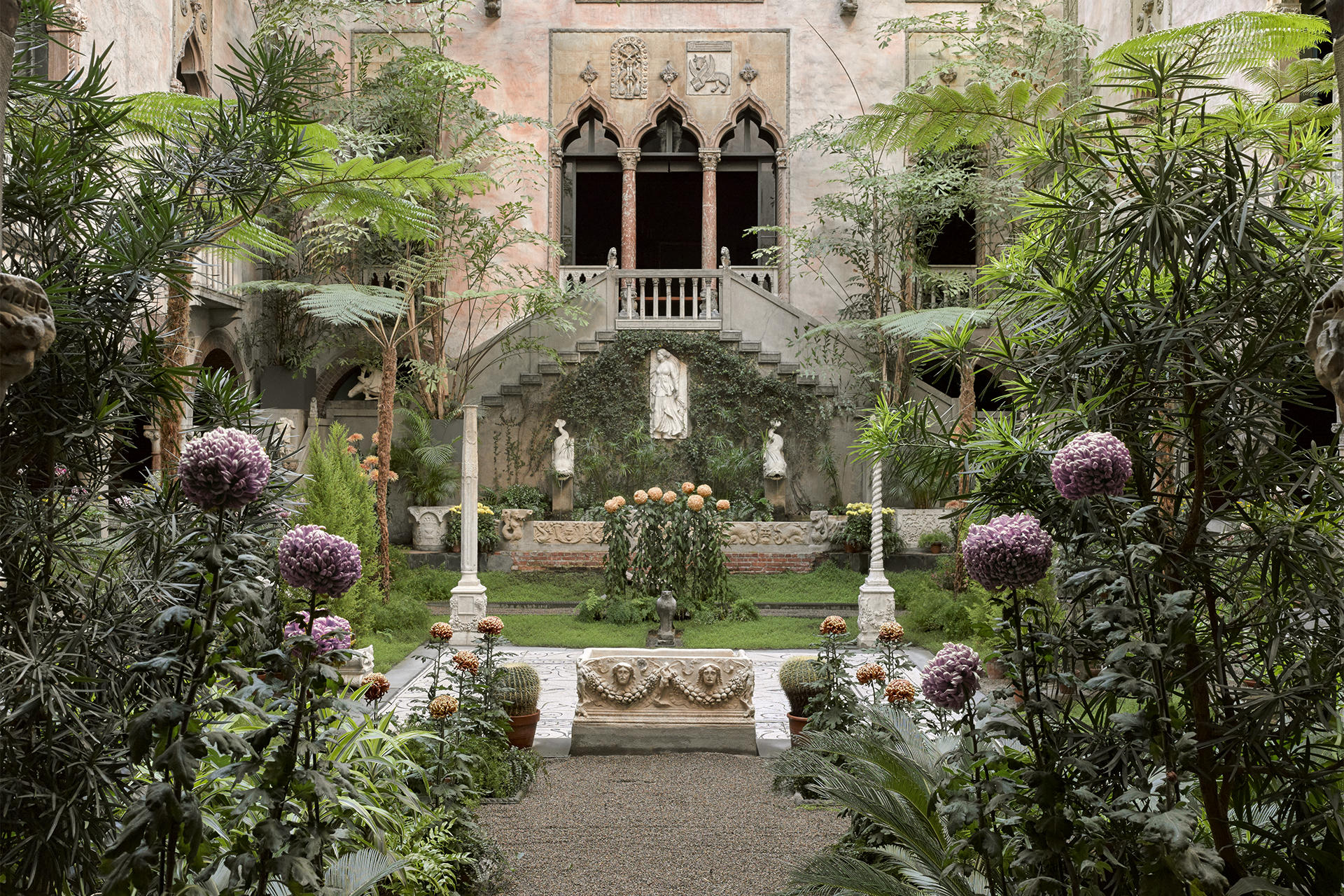 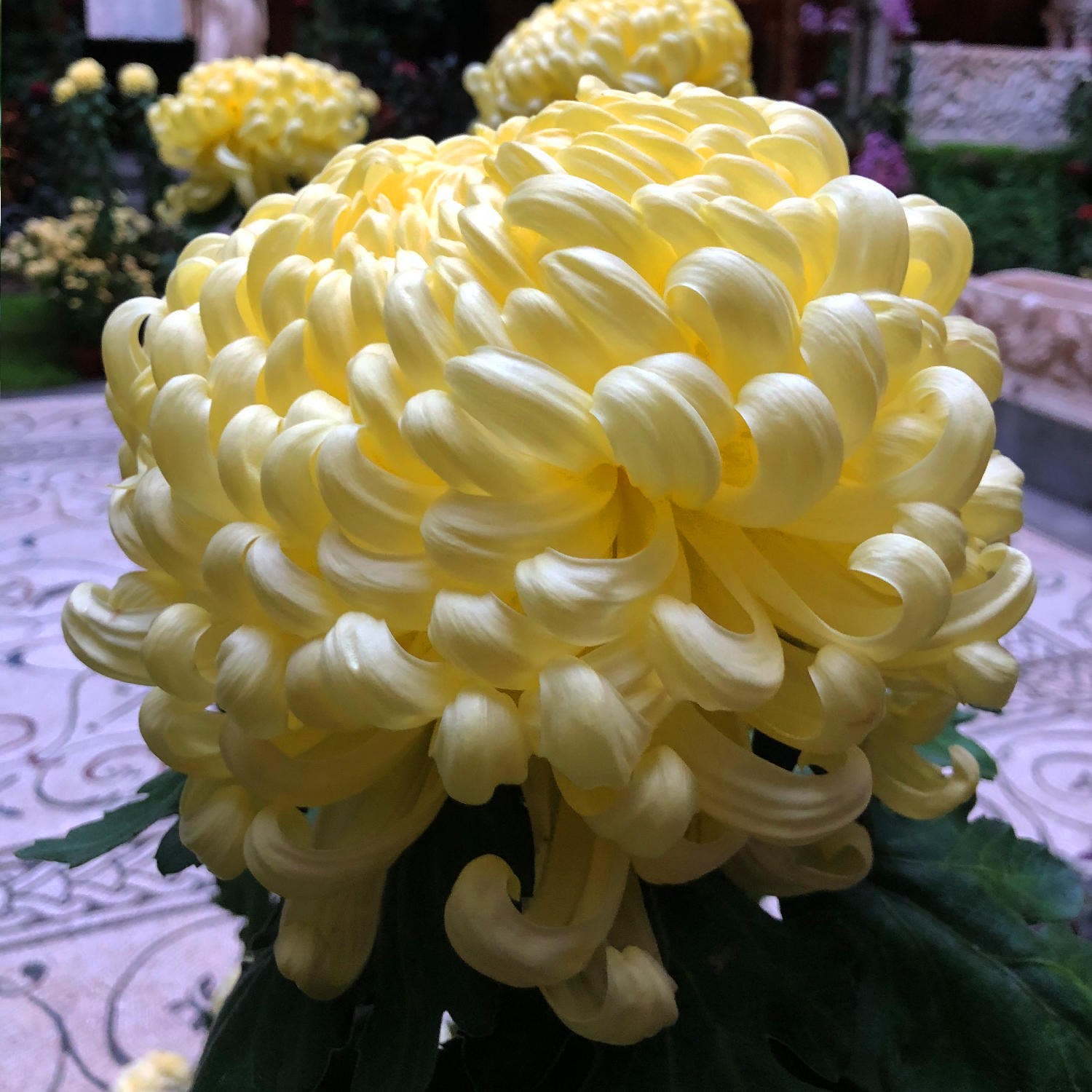 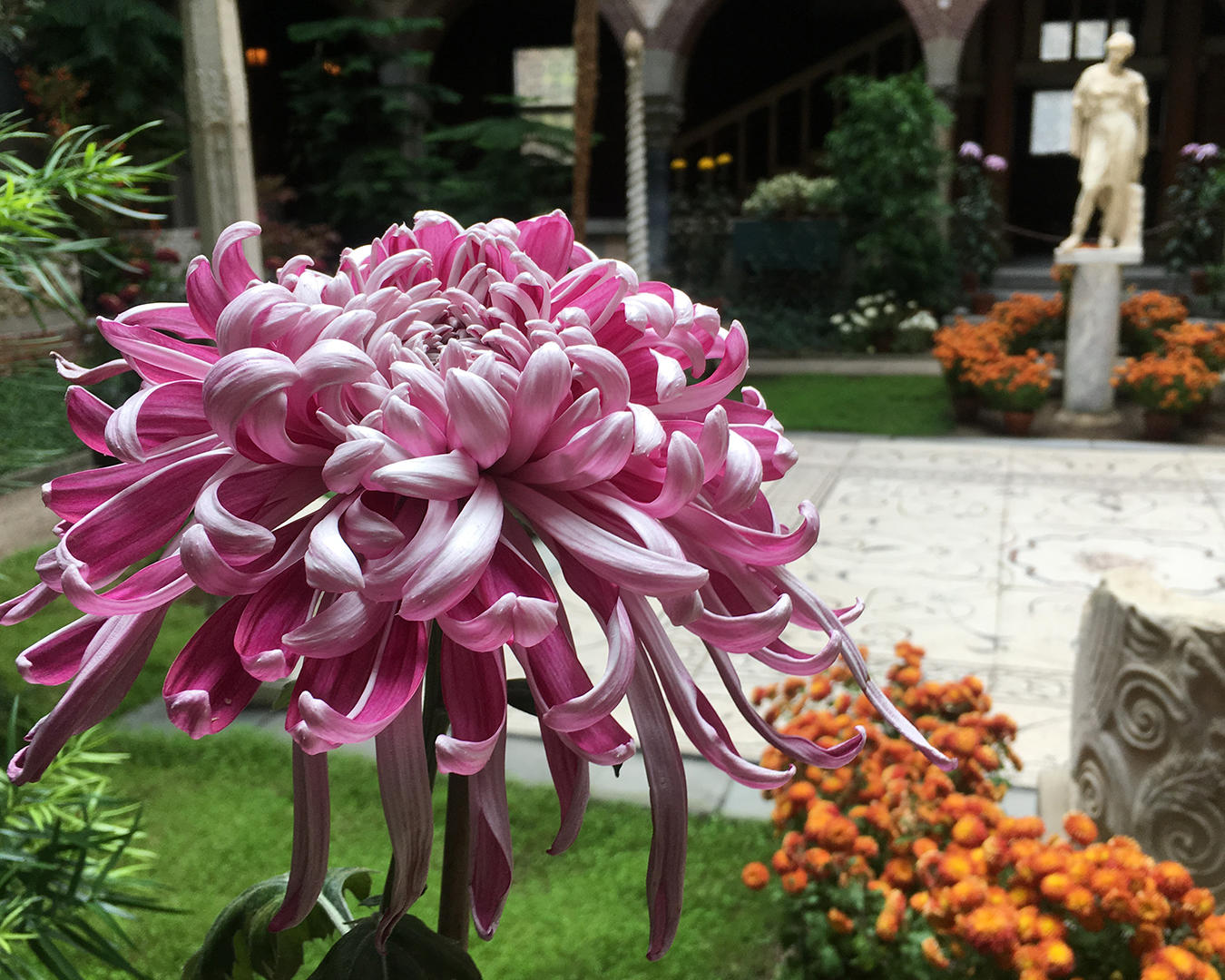 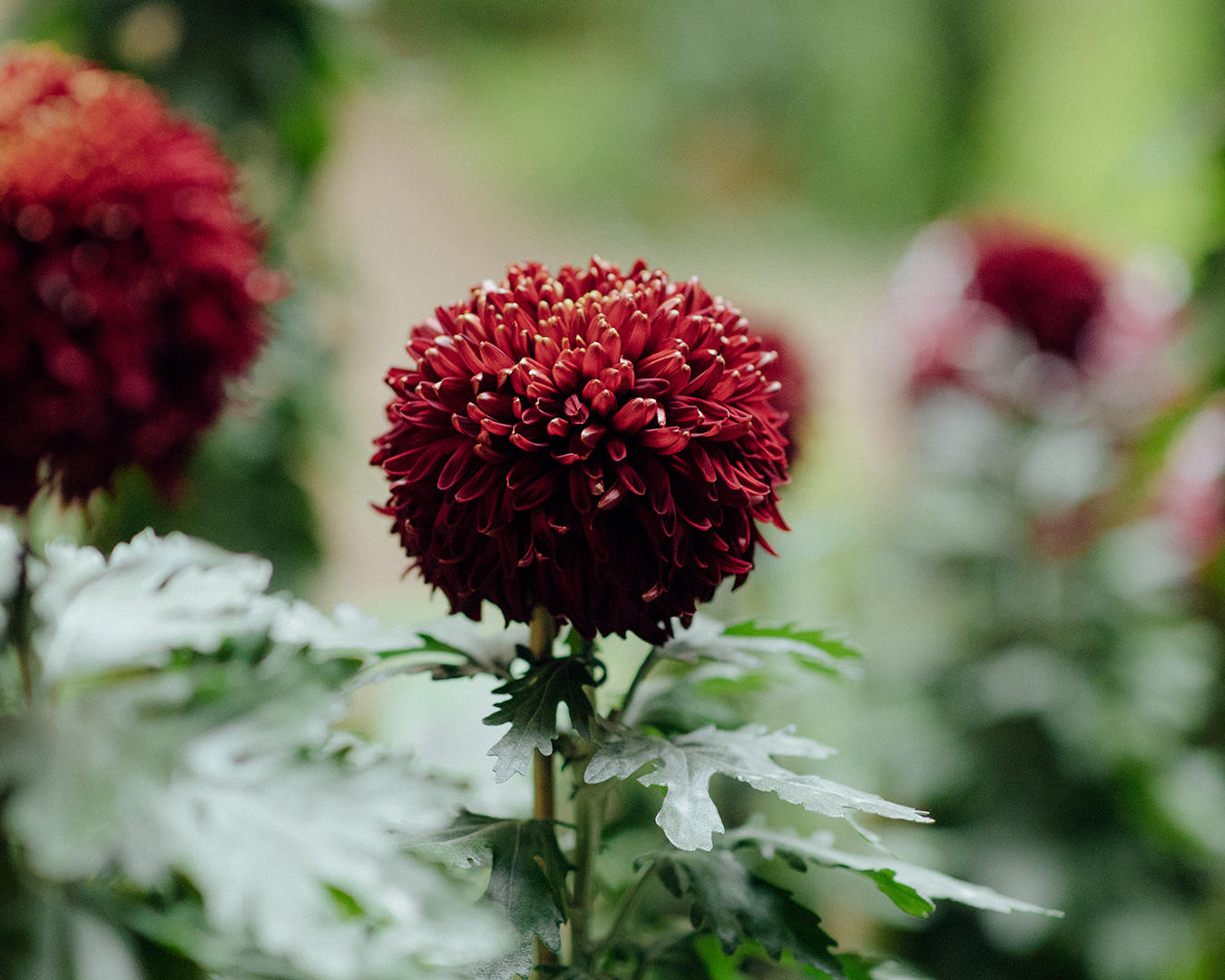 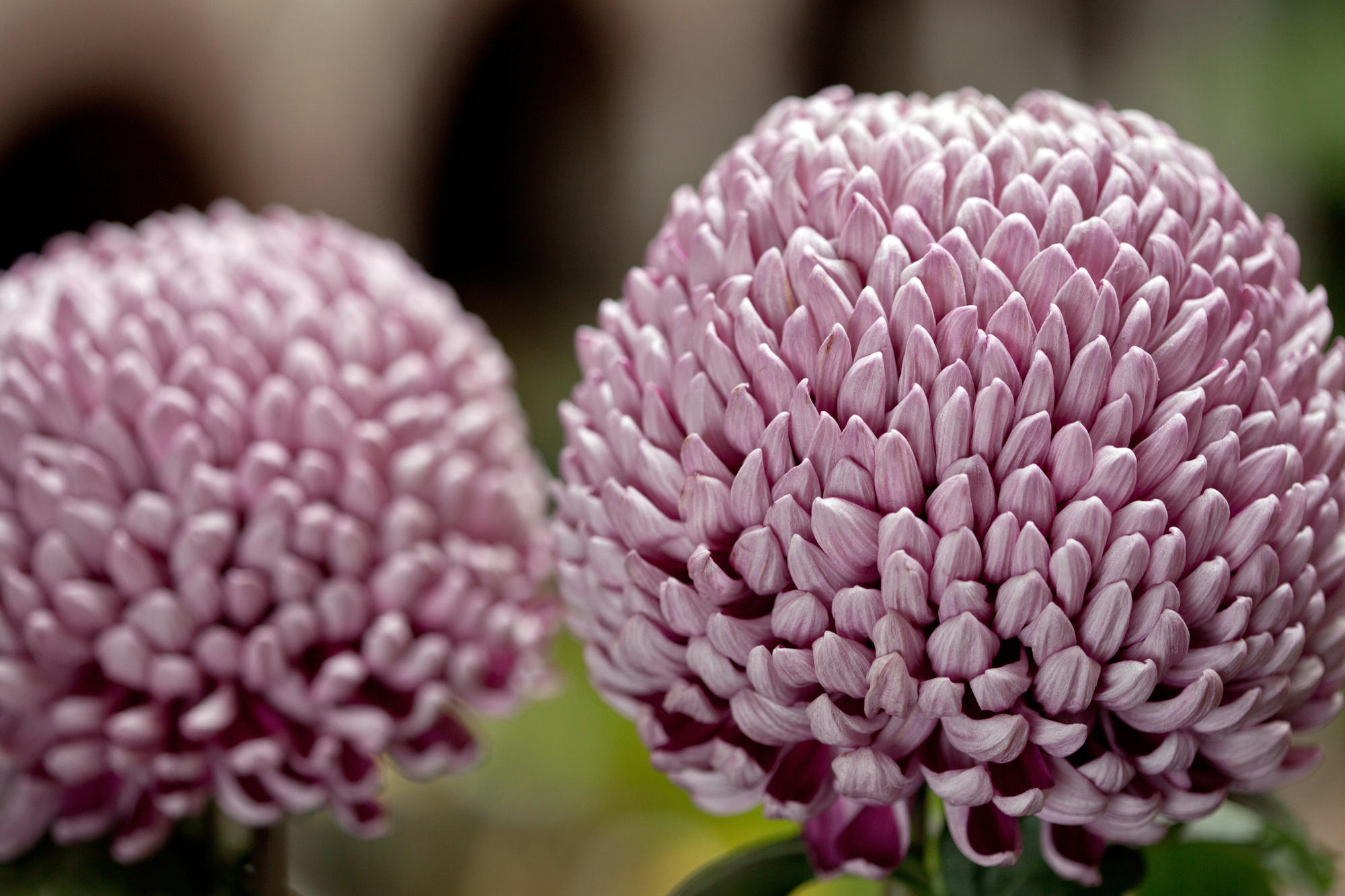 Each spring, our dedicated horticulturalists begin tending heirloom varieties of chrysanthemums in a Japanese technique called okigu. The Gardner Museum is one of just a small handful of institutions in the United States using this time-honored tradition; other practitioners include The New York Botanical Garden and The Botanic Garden of Smith College’s Lyman Conservatory, among others.

The process begins in late spring when over 300 chrysanthemum cuttings are potted for the first time at our South Shore Greenhouse. The horticulture team maintains the single-stem plants inside the greenhouse to safely grow tall away from the unpredictable weather of spring in Massachusetts. At the same time, the heartier bushes and sprays are grown outdoors.

Each week, the team is meticulously pruning, training, and fertilizing the plants. Around mid-summer, the plants are cut down to be twelve inches tall in a practice called “topping,” which helps ensure the chrysanthemums are uniform in height for their installation in the Courtyard. With months of prudent pinching and disbudding throughout the growing season, the technique will produce one colossal blossom atop a single stem over four feet tall.

By the fall equinox, each of the chrysanthemums has produced a bud, meaning their long-awaited Courtyard debut is mere weeks away! 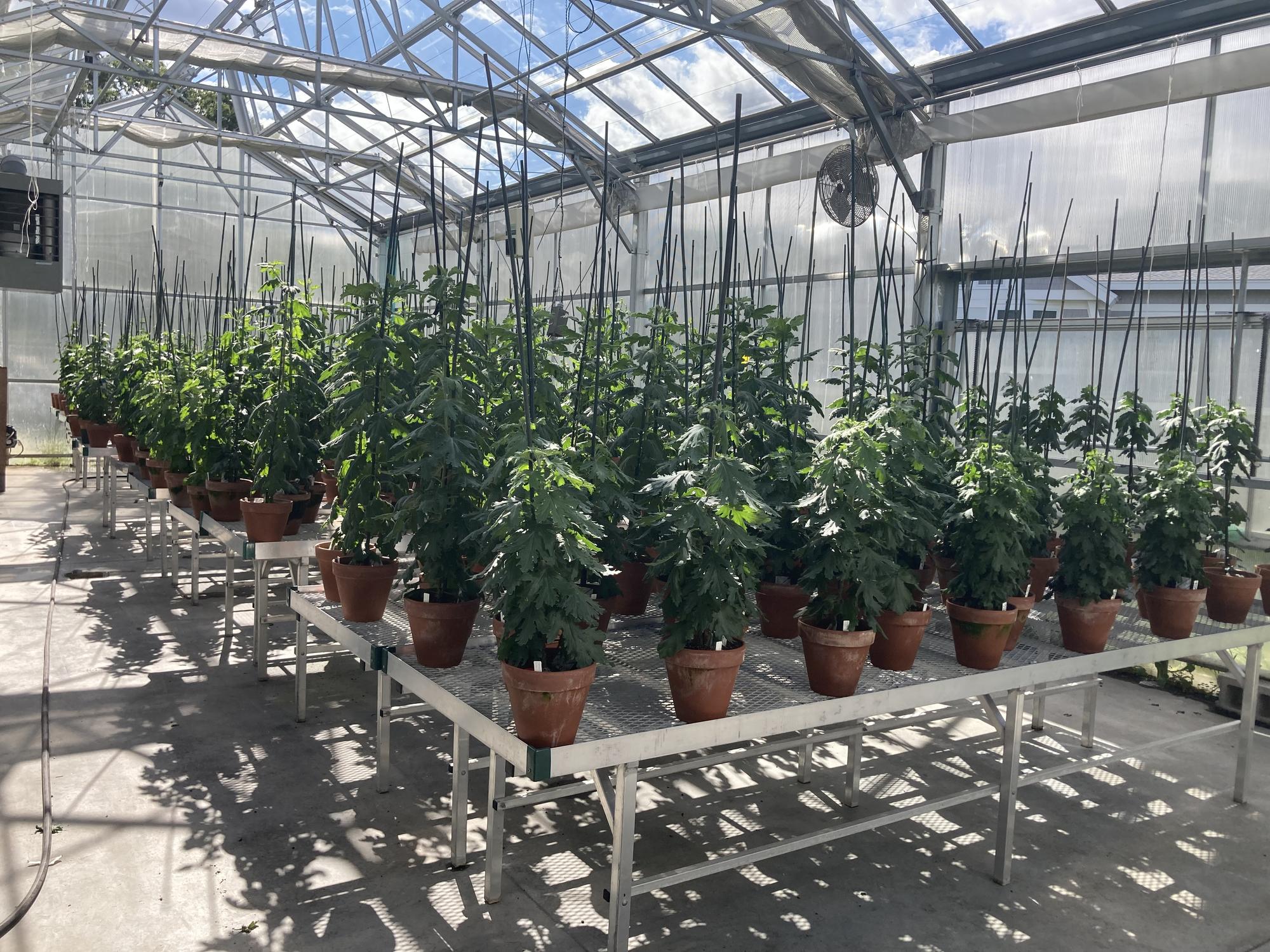 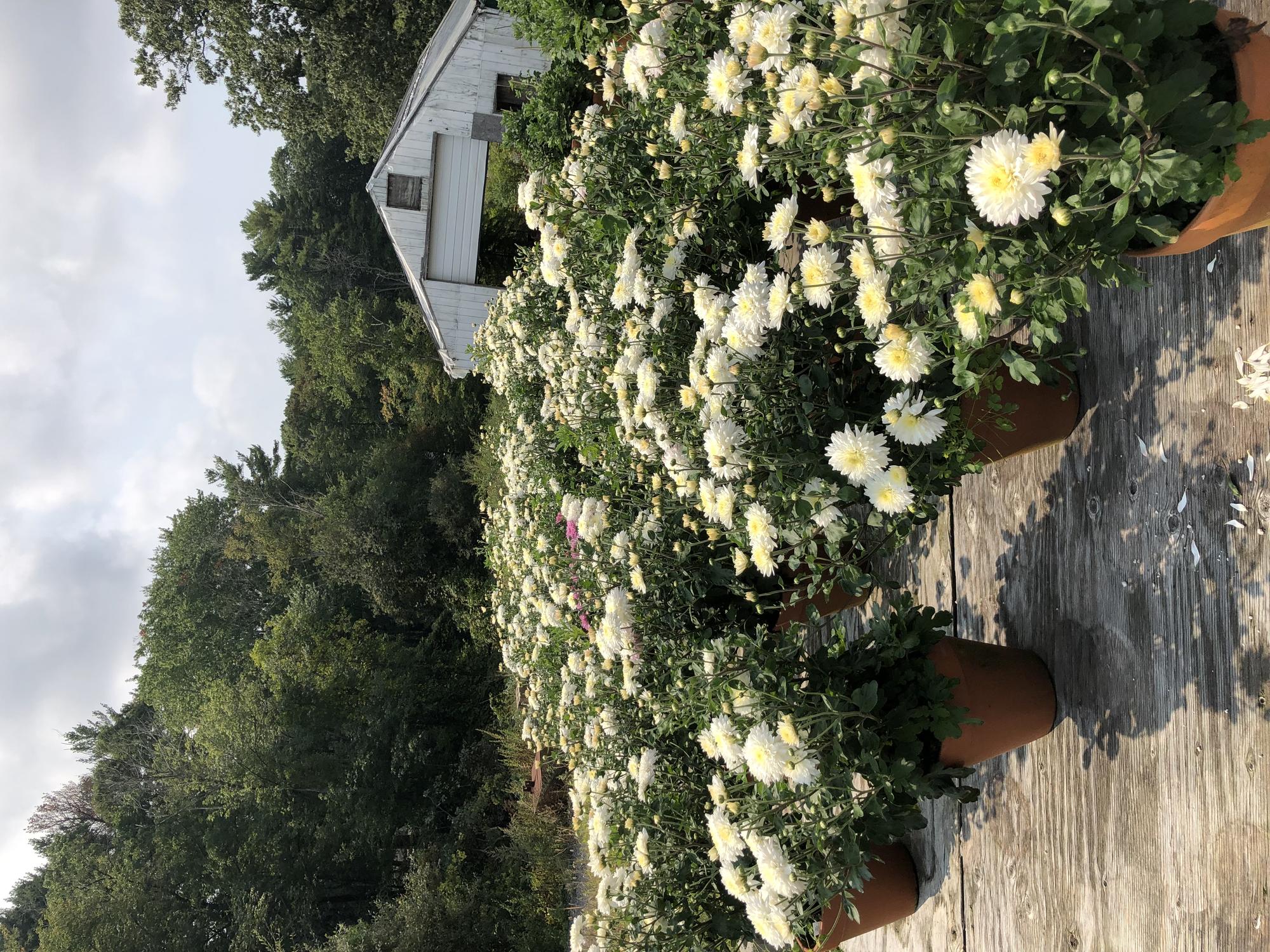 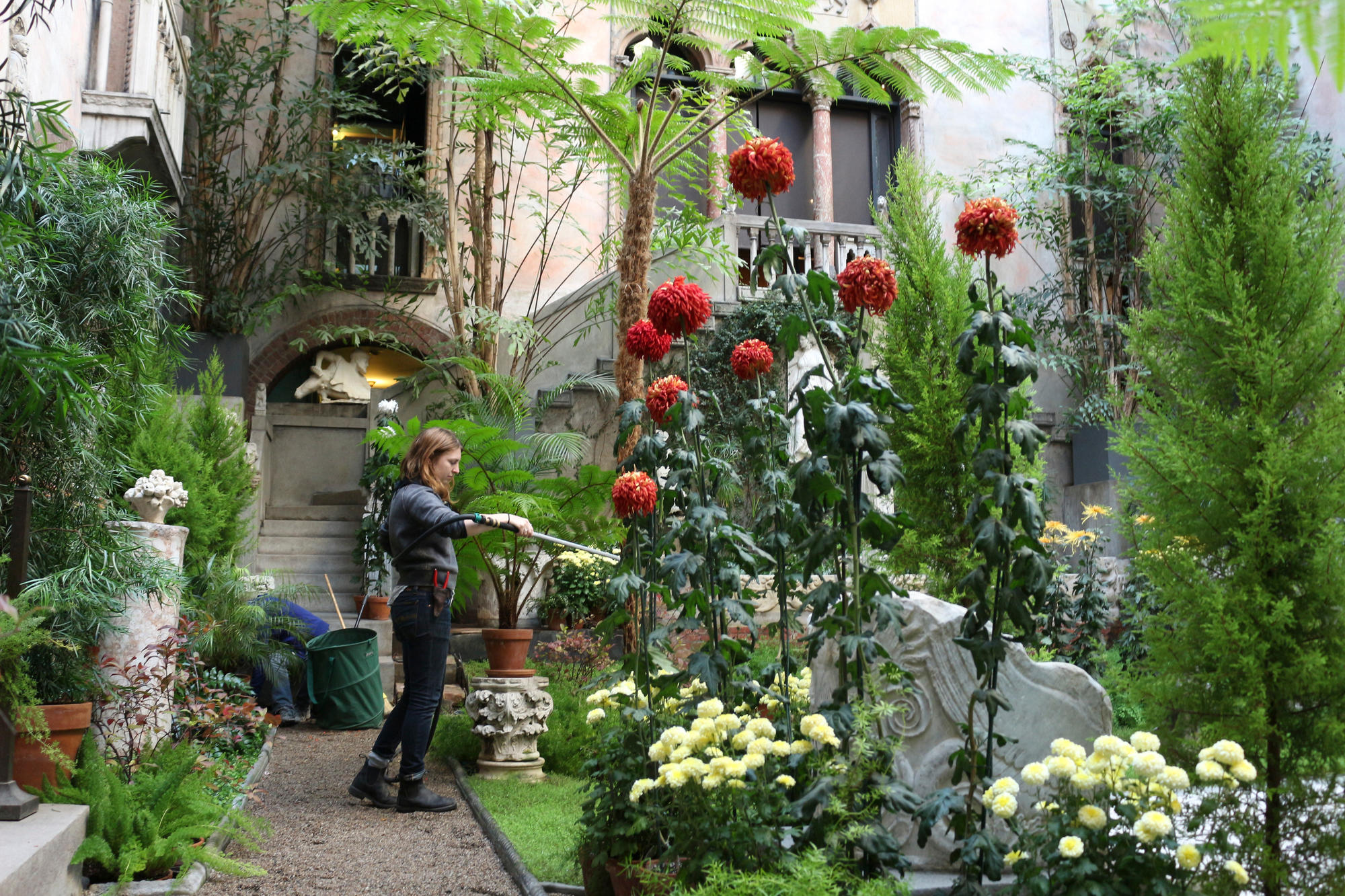 Single-stem chrysanthemums grown indoors at the South Shore greenhouse to safely grow tall away from the unpredictable weather of spring in Massachusetts.

The tiny, pincushion-like white bloom, named after famed regional horticulturist Allen Haskell, are grown in the Museum's outdoor greenhouse. According to Museum legend, Haskell gave the Gardner its first cuttings of this hardy mum.

This display has a lot of history behind it, as Isabella grew many chrysanthemum varieties on her Brookline estate, Green Hill, and won awards at the Massachusetts Horticultural Society’s Autumn Show. A pink-tinged chrysanthemum variety was even named after Isabella.

Native to East Asia and northeastern Europe, this flowering herb was believed to hold the power of life has been cultivated for medicine in China for over three thousand years. Chrysanthemums arrived in Japan in the eighth century. Cultivation of the flower was initially only permitted in the gardens of emperors and nobility.

Gardner horticulturists trained with a Japanese Chrysanthemum Master in the ogiku technique many decades ago. Since then, the practice has been passed down through the department’s generations through both oral history and hands-on observation. To learn more about the rich history of chrysanthemums at the Museum, read this blog by horticulturist Jenny Pore:

Chrysanthemum Impressions: A Spotlight on our Beautiful Blooms

John “Jack” L. Gardner was the great-grandnephew of Isabella Stewart Gardner and Chairman Emeritus of the Gardner Museum’s Board of Trustees.

Jack was a beloved member and guiding force for the Gardner community. He was an integral part of the board leadership for over 50 years, and his vision, advocacy, and generosity created much of what makes the Gardner Museum the vibrant cultural institution we know today. Not only did he work to preserve Isabella’s unparalleled collection, but he also helped propel the Museum into a modern era with his support for initiatives such as the construction of the New Wing. Jack’s legacy will remain a celebrated part of the Gardner Museum's history and evolution.

Following his death in January 2021, a small group of Jack’s fellow Board members, friends, and colleagues established an endowment fund to name the John Lowell Gardner Chrysanthemum Installation in perpetuity. This naming of the annual fall horticulture installation honors Jack’s lifetime of dedication to the Gardner, as well as his love of the Courtyard, which he saw as the heart of the Museum.

The Museum offers four special floral installations each year: chrysanthemums in the fall, nasturtiums in the spring, bellflowers in the summer, and the Holiday Courtyard in the winter. While the Courtyard is in bloom all year long, with nine transformations each year, these four installations celebrate iconic flowers with deep, historical roots at the Gardner, and whose height, color, and shape bring whimsy to the space to the delight of all visitors.

Return to all Courtyard Displays