From Venice to the Fenway: Architectural Elements in the Courtyard

Ever wonder about the architecture of the Gardner Museum’s Courtyard? Read on to find out how Isabella used windows, balconies, and arches salvaged from grand Venetian palazzos to create her own unique vision.

When walking into the Gardner Museum for the first time, visitors are amazed by the beauty and tranquility of the Courtyard. Thanks to rotating floral displays, it is the beating heart of the museum.

The building is one of many examples of Venetian Gothic Revival architecture, which became popular in the United States in the second half of the nineteenth century. Woven into its fabric are objects from many different periods and places, including Venetian sculpture and architectural elements. Sylvester Baxter, a newspaper writer, poet, and urban planner in the Boston area, expressively described it in his 1904 review of the museum.

“Yes, we are in Italy! Or at least, Italy has come to us, just as the Romans carried Rome with them throughout their empire, as the Greeks built up a new Greece wherever their cities rose on Mediterranean or Euxine shores. There are Venetian colonnades about the cloisters, Venetian windows looking upon the court, Venetian balconies, Venetian loggias, Venetian carvings embedded in the walls, Venetian stairs—all genuine, all ancient, all stones of Venice bearing the incomparable hue of age, touched with the friendly touch of time, weather-worn, smoothed and rounded by the centuries and here reverently placed to endure for a new lifetime in a new Renaissance for the new world.”*

Designed by architect Willard T. Sears under direct guidance from Isabella, the Museum reflects Venetian architecture, but it does not directly reference any specific Venetian palazzo.

Gardner admired many of the palaces along the Grand Canal but introduced them to Boston in an unexpected way, bringing inspiration from their facades into the interior of her courtyard. Spanning four stories, these courtyard walls suggest the outsides of Venetian buildings indoors, with single arched windows on the sides and large multi-arched openings in the center of each floor.

Even though Sears was the architect of the Museum, Mrs. Gardner was directly involved in choosing and placing the architectural elements and fragments in the Courtyard. She travelled to Italy in 1897 and 1899, purchasing windows, arches, balconies, and columns from dealers like Moisè Dalla Torre and Francesco Dorigo in Venice in anticipation of the creation of her museum.

As construction of her museum continued through 1900, Gardner realized that she needed more architectural elements to complete the interior facades. So she imported even more objects, shipping items from the same dealers she had worked with previously in Venice, and often choosing them on the basis of photographs alone. The eight balconies on the East and West sides of the Courtyard originally embellished the Ca’ d’Oro, one of the most important palaces along the Grand Canal.

Mrs. Gardner purchased the balconies from the Venetian antiques dealer Francesco Dorigo, from whom she also acquired other architectural elements. This piecemeal approach to installing the architectural elements and fragments is evidenced by the Courtyard’s idiosyncratic assemblage of windows, balustrades, capitals, and columns. They vary in size and design given they were originally installed in different palaces throughout Venice, many of which were disassembled by the end of the nineteenth century and dispersed across the world. 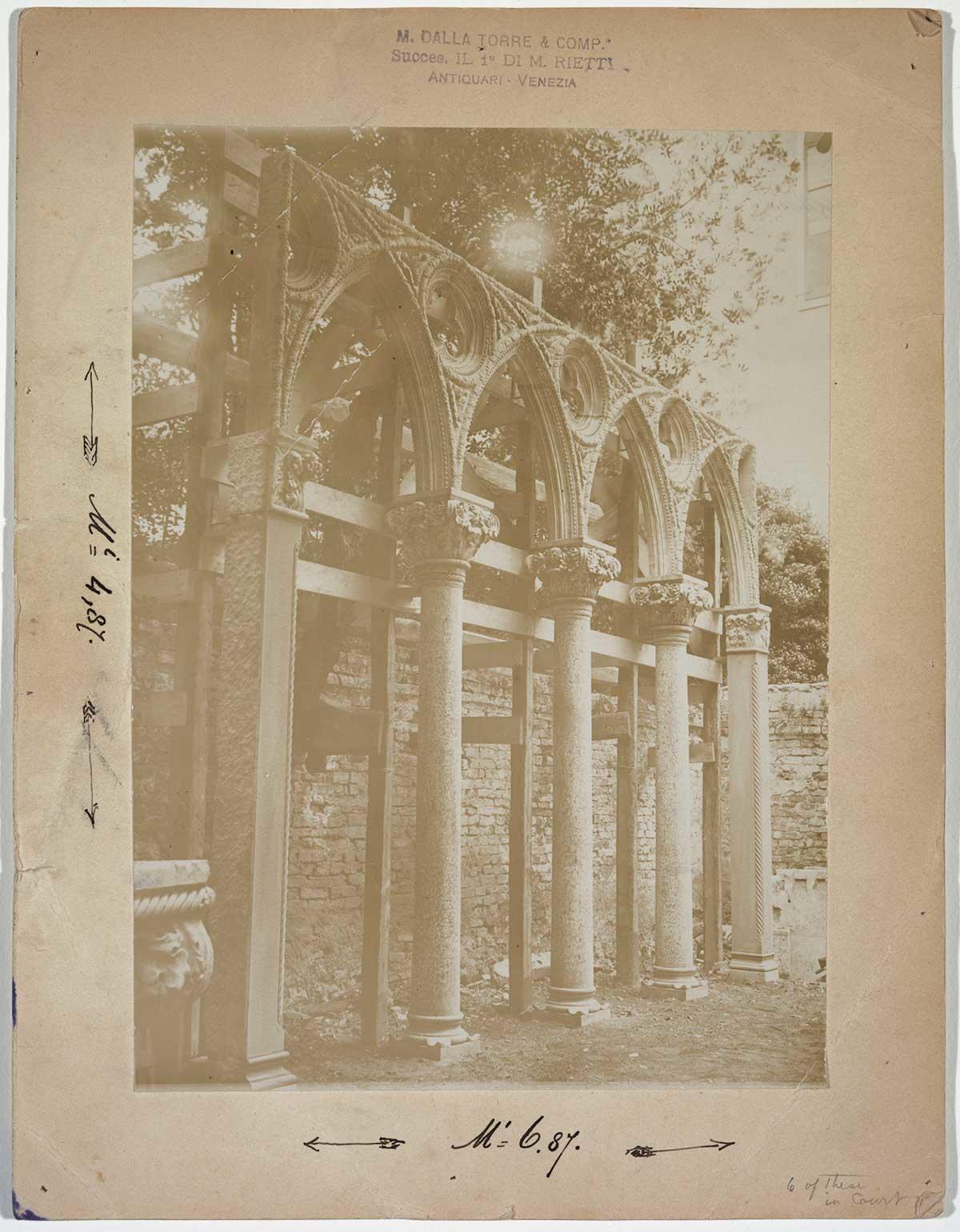 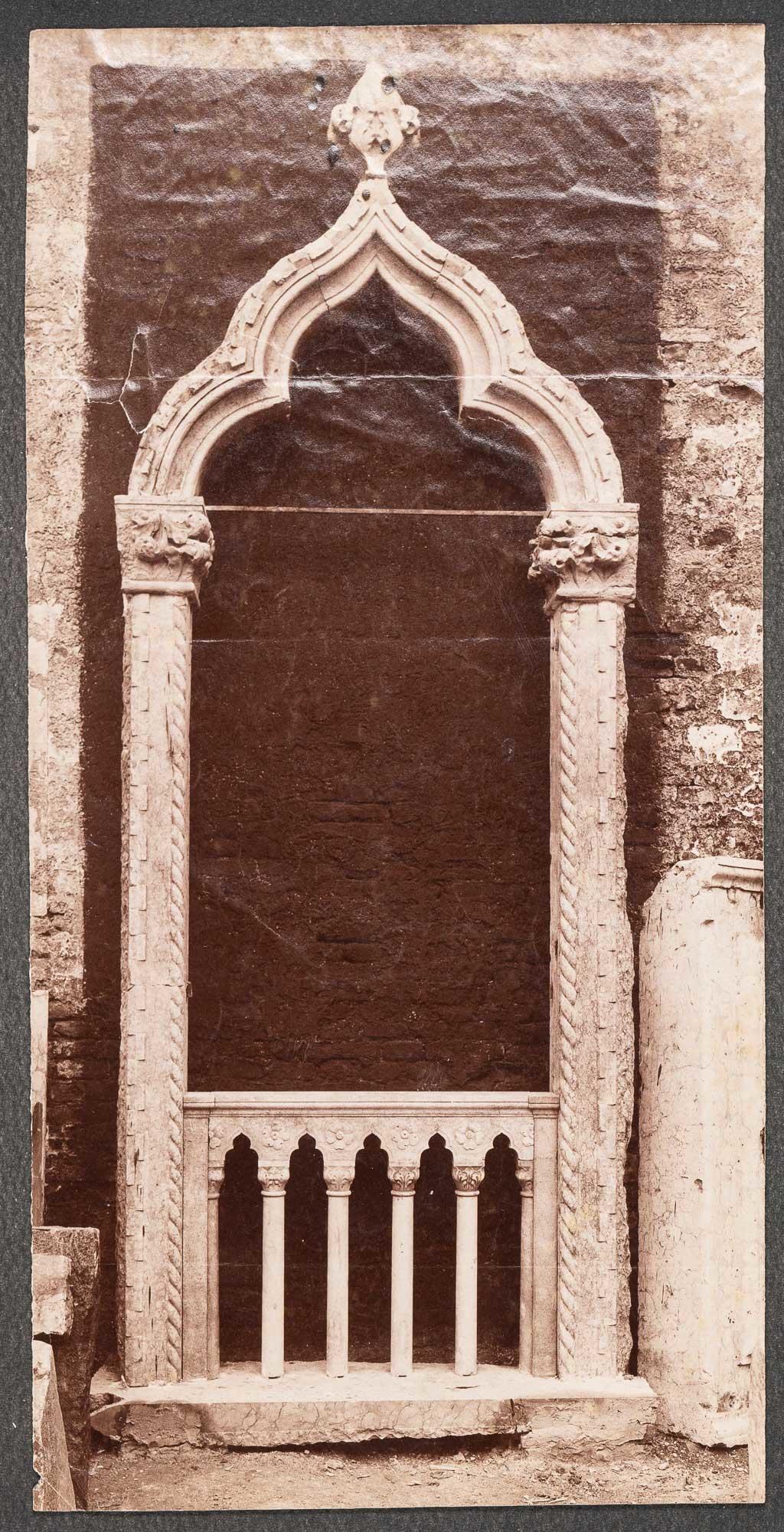 So step into the Courtyard and marvel at the various similarities and differences; from the arches to the windows, the balustrades to the columns, each element has its own story to tell. It truly is an architectural treasure!