Learn how textiles tell a story in each room of the Gardner Museum!

Isabella Stewart Gardner loved textiles and used them effectively throughout the Museum to create evocative environments. From the tapestry collection to the furnishing textiles—dynamic patterns, sumptuous textures, and bold colors contributed to a visual dialogue, where artworks of different mediums express ideas and themes. Textiles provide warmth and richness. Their color evokes emotion while the height and movement of a pattern’s design influences the way a visitor’s eye travels around the space. The weave structure plays an important part in how light affects the experience. Light is reflected off smooth textiles such as damasks, absorbed by dark velvets, and scattered by the uneven surface of brocatelle weaves. 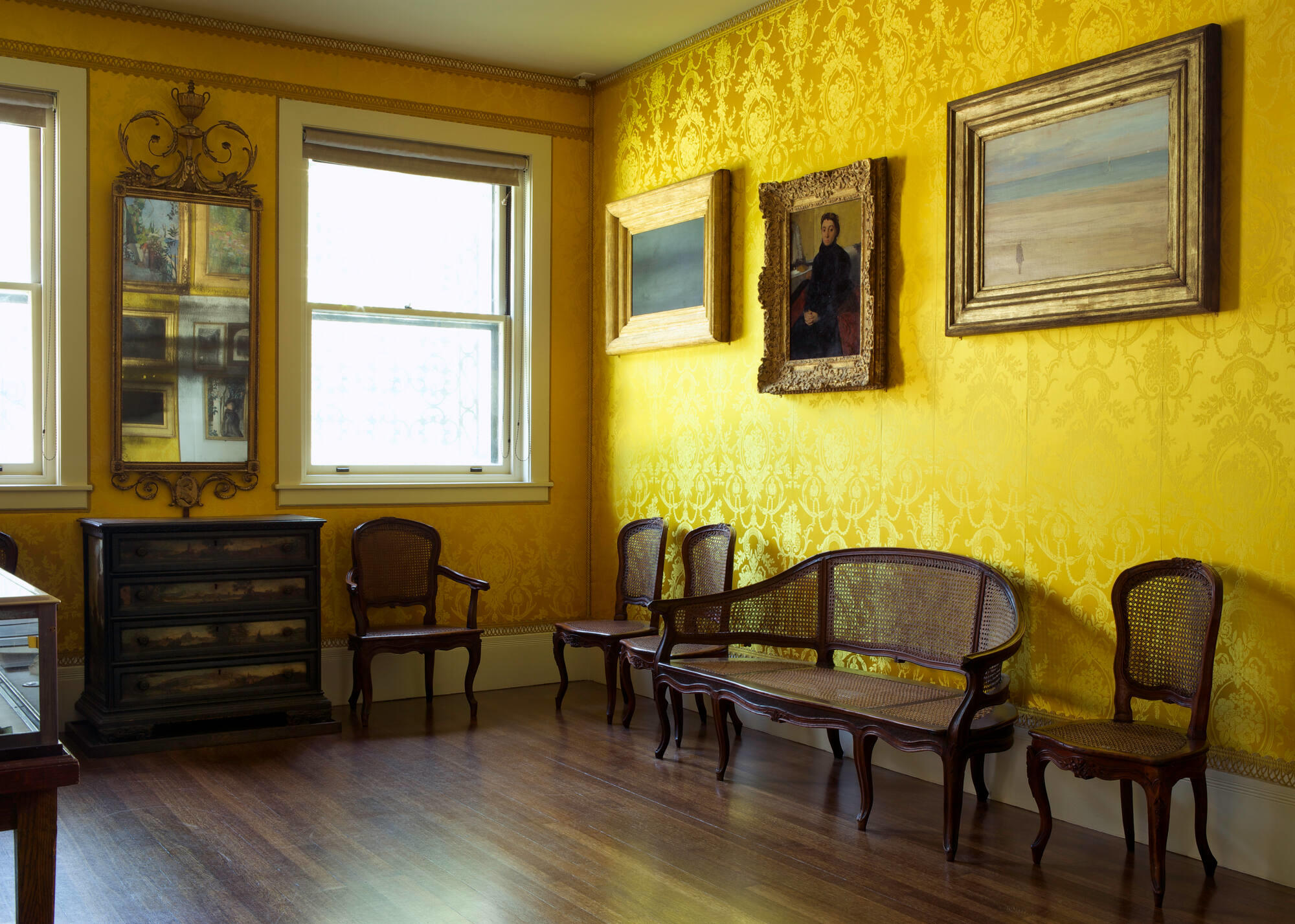 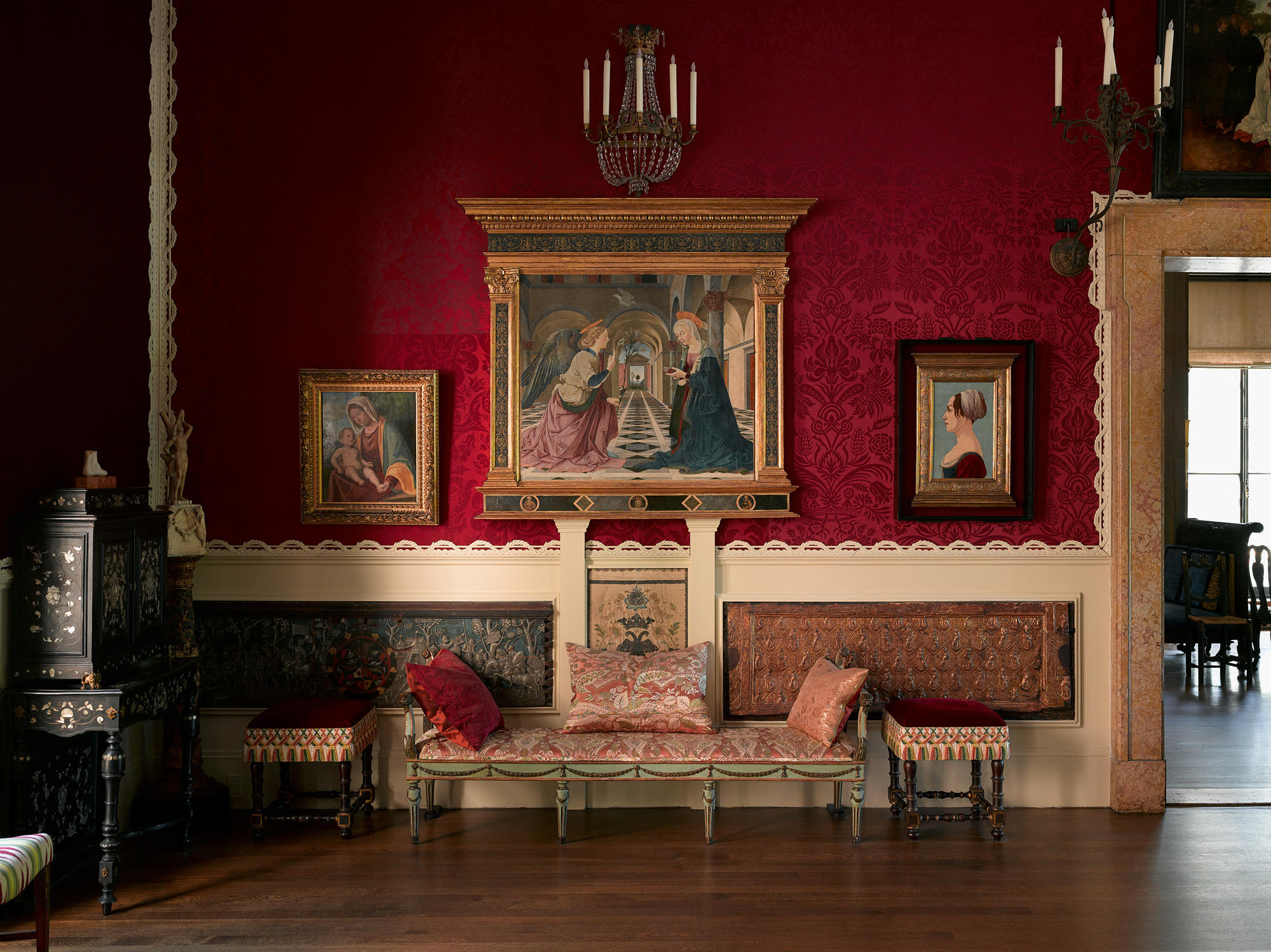 The wall upholstery is essential in conveying an overall theme and illustrated her holistic approach in designing each gallery. The bright yellow, neoclassical damask in the Yellow Room, with a pattern of lyrical drippy pearl swags and circular arabesques, conveys a joyful emotion that supports the gallery’s music theme. The red damasks with symbols of the Virgin Mary in the Raphael Room reinforces the theme of virtuous women, like those pictured by Botticelli’s Story of Lucretia and Piermatteo d'Amelia’s Annunciation and the seven Madonna and Child paintings. 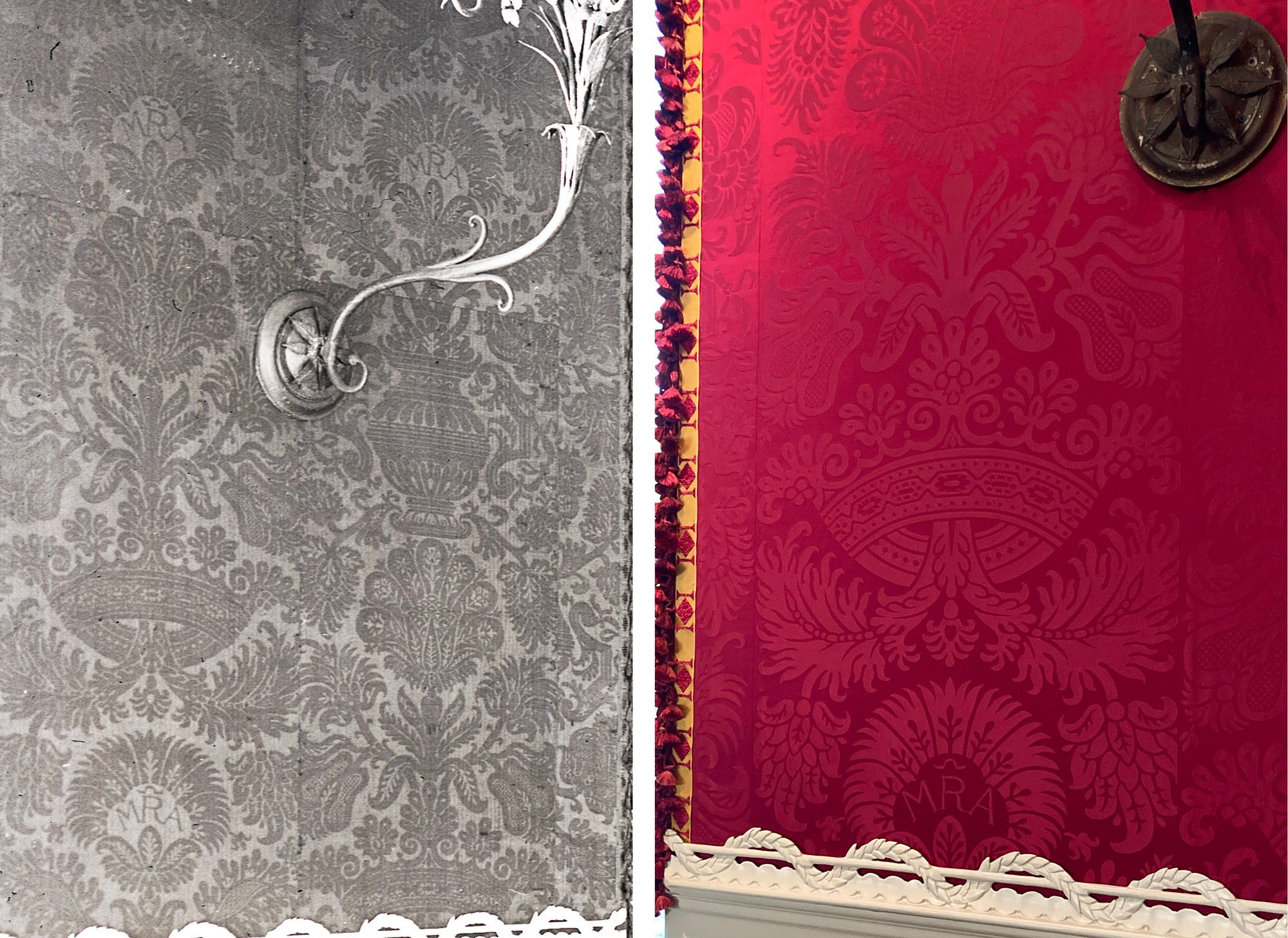 Detail of original Yellow Room wall fabric, a neoclassical damask, in 1926 (left) and a detail of the reproduction wall fabric in 2010 (right)

The theme of power and authority is on display in the Titian Room with Velázquez’s painting of King Philip IV of Spain. The Spanish Netherlands, which King Philip ruled over, was at the height of its economic power during the seventeenth century, and tulip mania earlier in the century greatly contributed to its wealth. A brocatelle pattern on the north wall conveyed this history: it featured an emperor tulip, the most prized tulip of the seventeenth century.

Textiles are the most fragile objects in the Museum’s collection. Uncontrolled light levels cause dye fading and environmental pollutants weaken structural stability. The effects of gravity over time cause vertically hung textiles, such as wall fabrics, to sag. Over the years, many original textiles Isabella installed were removed because of their poor condition and were replaced with new textiles. The replacements seldom captured Isabella’s original intent and their contribution to a gallery’s theme was lost. 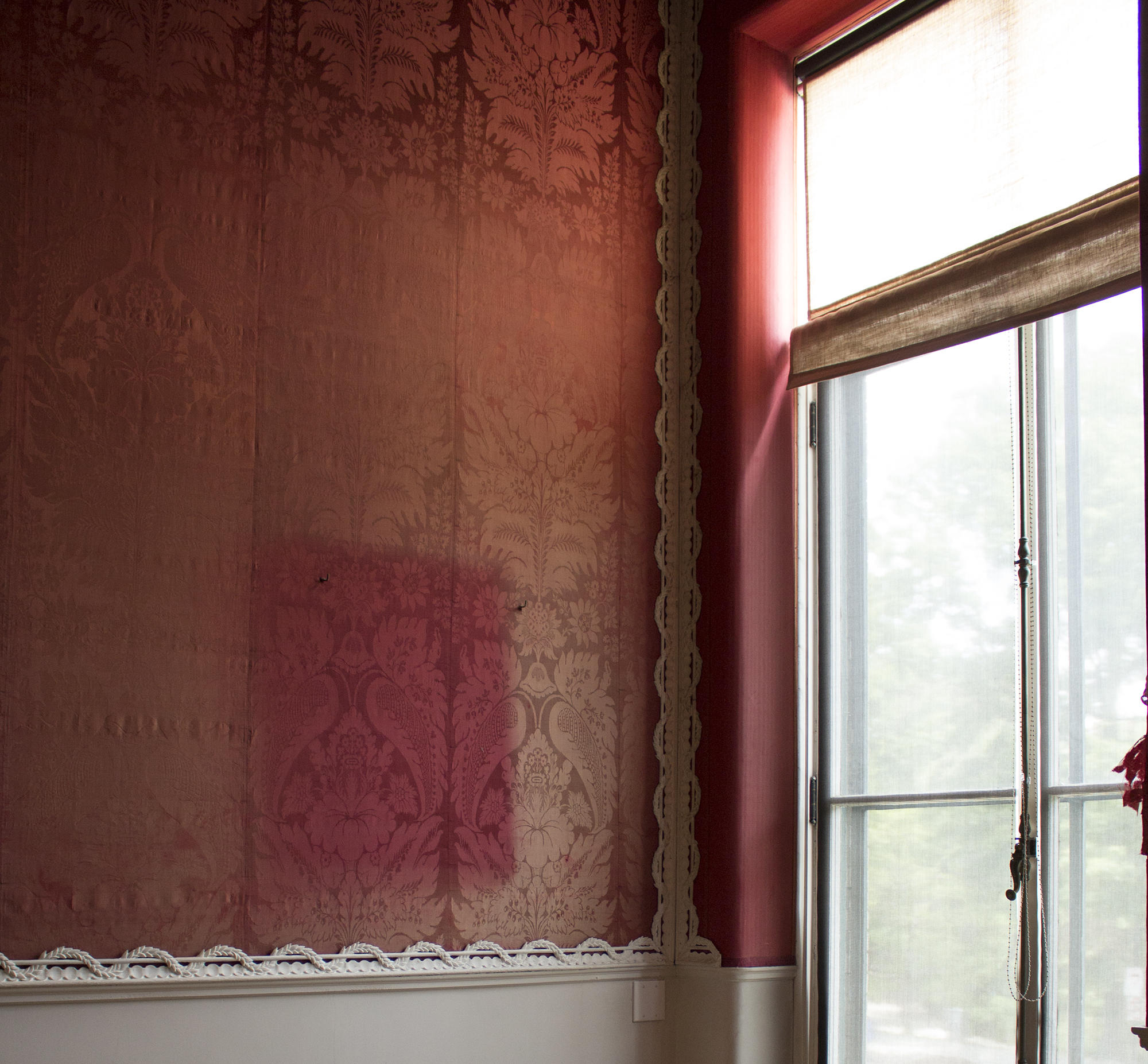 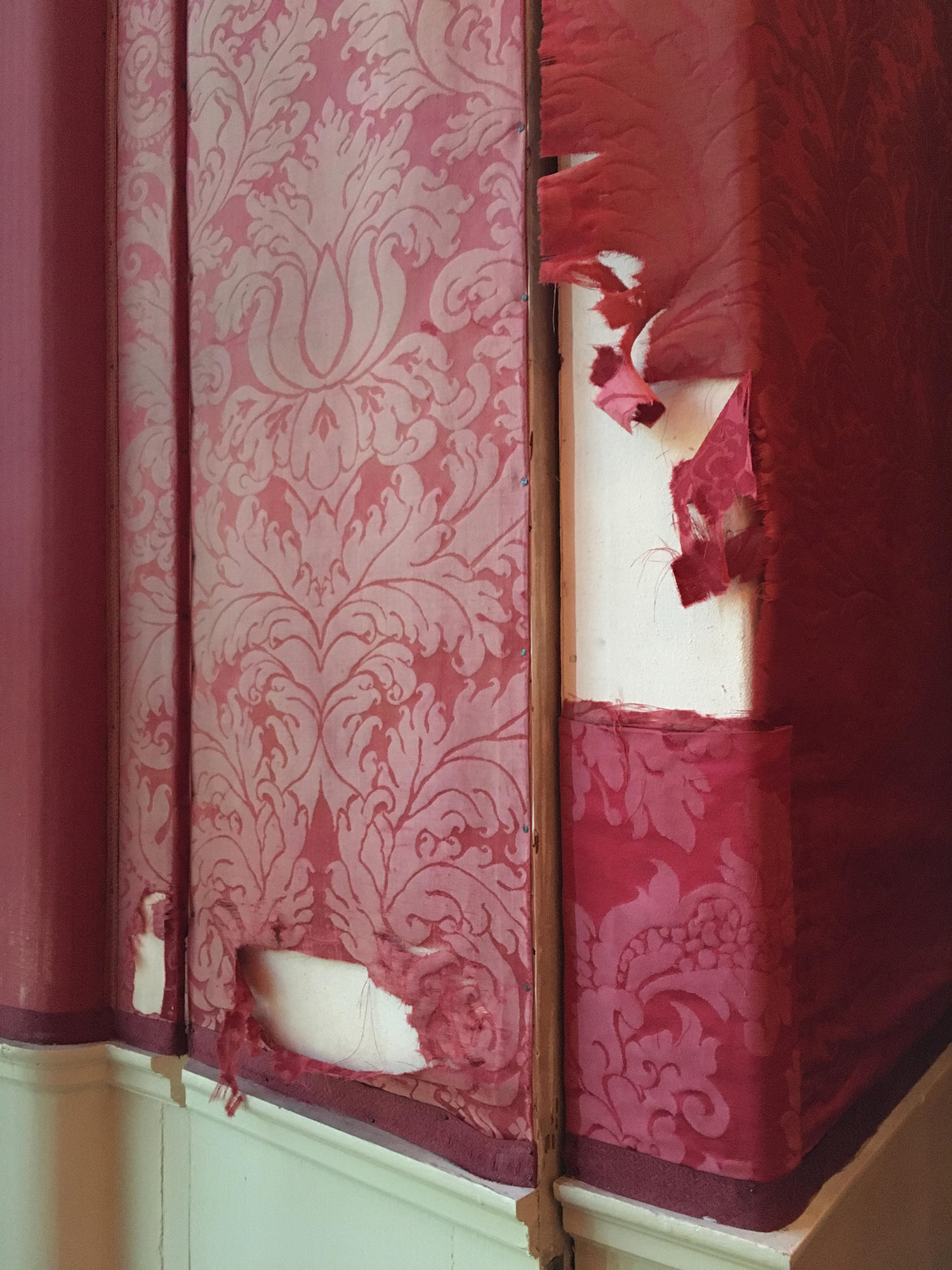 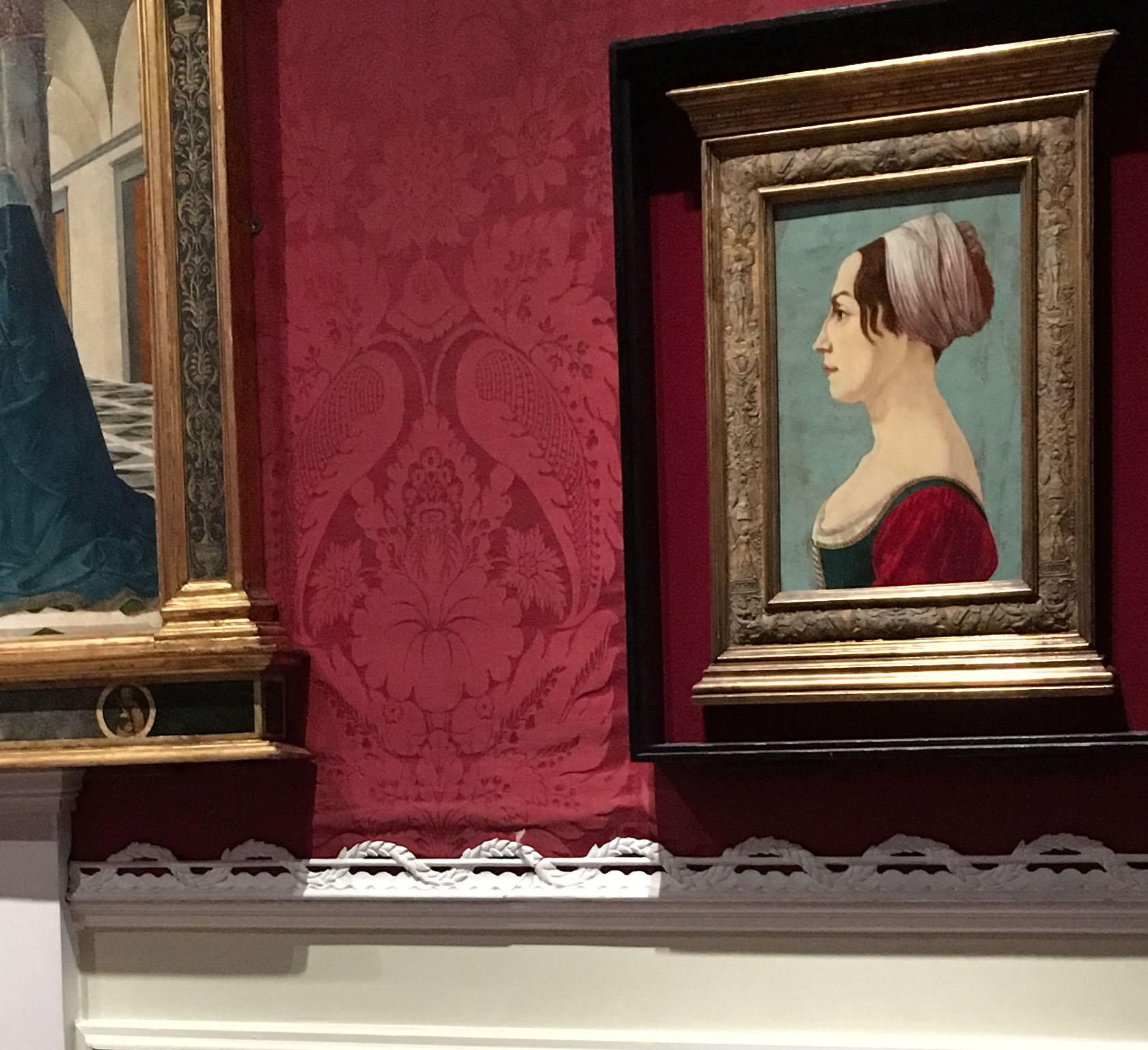 Fabric from the walls of the Raphael Room showing light damage, 2017

Fabric from the walls of the Raphael Room showing silk loss, 2017

Fabric from the walls of the Raphael Room showing sagging, 2017

Research helps to recreate the upholstered walls created by Isabella. We rely on written and photographic documentation from early in the Museum’s history and perform analysis on original fragments. This research shows Isabella used many patterns, colors, and silk weave structures to adorn the walls in five galleries. Much like a jigsaw puzzle, patterns were broken into pieces and scattered around the room with some pieces hung upside down and/or sideways.

Research for the 2021 Titian Room Restoration Project revealed walls originally upholstered with a pastiche of thirteen different seventeenth and early eighteenth century patterns, many of them red and yellow gold. In 1959, the original upholstery was replaced with only four, red patterns, creating a visually quieter room than Isabella intended. The atmosphere significantly changed. The replacements diminished the effects of light once absorbed by velvets and scattered by the brocatelles and their patterns had no relation to the room’s theme.

For the current restoration campaign, a French dye house custom-dyed silk yarns to match the original red and yellow-gold colors. Prelle, a heritage textile company based in Lyon, France and a family business since 1752, recreated eleven of the original Titian Room patterns. Pointcarre Textile, a CAD weaving software program, aided in translating the historic images and drawings of the originals into patterns a mechanical loom wove.

Soft Walls Associates of Boston installed the new fabrics. Bruno Jouenne, owner and installer, is the third generation of traditional European wall upholsters. To achieve the pieced construction seen in historic room photos, he cut fabric and pieced together multiple patterns so that individual motifs from different patterns fall exactly where they did in Isabella’s lifetime. He seamed the pastiche of patterns into one big panel and stapled the perimeter to the wall under tension. The tensioned panels behaved much like a muscle and required additional stretching when tensioning relaxed overnight. Like icing on a cupcake, finishing touches included trimming the walls with matching red braids and gimps.

The renovated Titian Room once again showcases Isabella’s original design, with her use of many patterns, colors, and silk weave structures. Light dances around the room, just as she intended. Check it out on your next visit!

Learn More about the Project

Shedding Light on the History of Lighting