Letters from Isabella’s friends offer us one of the only insights into her personal life, revealing how she was a faithful correspondent to many.

Isabella Stewart Gardner was famous for many things. Her philanthropy, fashion sense, and, of course, her impressive art collection were just the beginning. While she was quite the public figure—brushing elbows with socialites, famous actors, writers, and political figures—we don’t have many first-person accounts of her life. Isabella was a private person. She even asked her friends to burn her letters.

There isn’t much documentation of her own writings preserved in the Museum. But, there is a large collection of letters that Isabella received from her cohorts. Many are from notable women at that time, like Isabella Augusta Gregory.

Augusta Gregory, also known as “Lady Gregory,” was an Irish dramatist (or playwright), folklorist, and theatre manager. She co-founded the Irish Literary Theatre and the Abbey Theatre, writing numerous short works for both companies. Isabella shared Lady Gregory’s love of the stage and the two women probably met at one of Lady Gregory’s productions in Boston.

Isabella invited Lady Gregory to Fenway Court (what she called the museum during her lifetime) to view the very same collection we see today. Lady Gregory also gave a lecture in the Museum’s Music Room on her method of playwriting. The two women corresponded throughout their lives, and there are 16 letters from Lady Gregory in the museum’s collection. Isabella kept her friend’s letters tucked inside books related to Irish literature in the Macknight Room.

In a letter from October 1911, Lady Gregory mentioned that she was grateful to meet Isabella while visiting Boston. Isabella kept the letter in a book of Celtic mythology translated by Lady Gregory. She even enclosed a clipping of a playbill from the Irish Players’ performance at The Abbey Theatre. 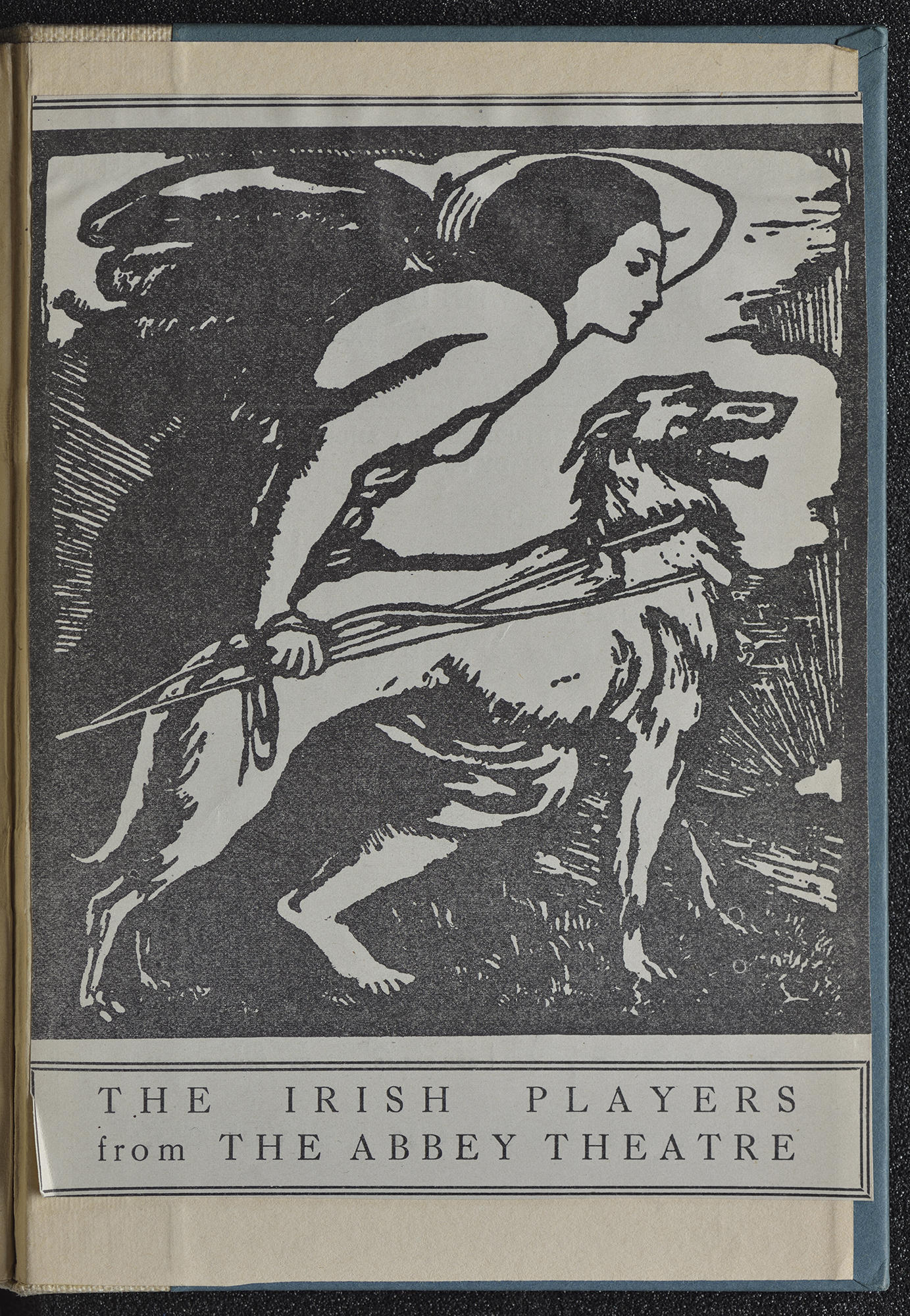 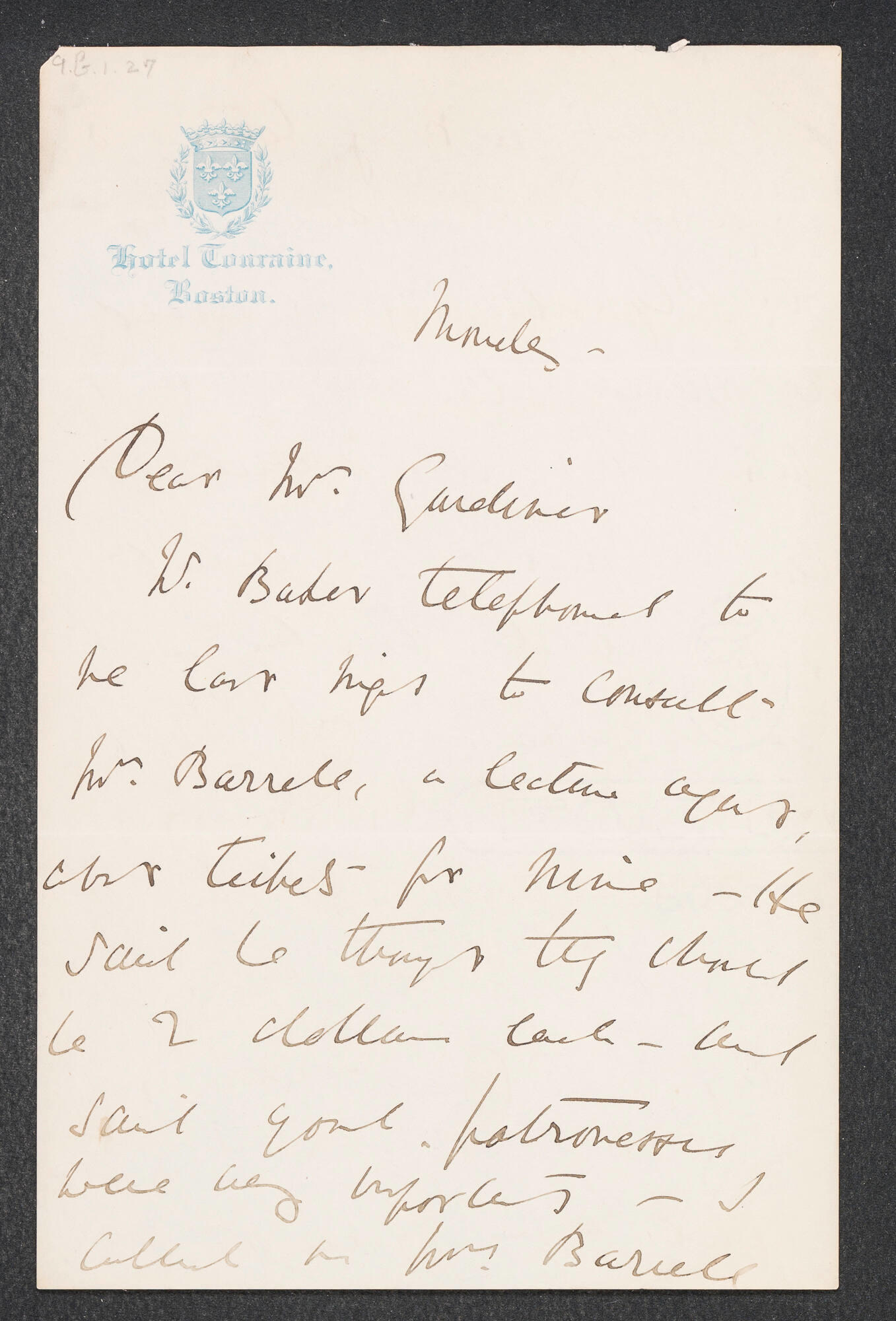 “The Irish Players from the Abbey Theatre,” in Gods and Fighting Men: The Story of Tuatha de Danann and of the Fianna of Ireland, 1910. Translated into English by Lady Gregory.

As their friendship grew, so did their mutual admiration based on their respective work and shared love for the arts. Being a successful and well-known woman at any time period is a challenge, especially in the early 1900s. Isabella and Lady Gregory were likely able to discuss their difficulties with each other.

Last night I dreamed that I was going into your house, & you were waiting there & welcomed me, & I awoke with a sense of well-being, and of all the beauty that had been around me... I was comforted by thinking of what great work you have done.

In January 1914, Lady Gregory wrote about dreaming of Isabella’s Fenway Court. She hoped that her own work would also leave an everlasting impression on the audiences of her plays. Lady Gregory often sent Isabella her literary works or pieces by her friends along with her letters. With this letter, she sent William Butler Yeats’ Poems Written in Discouragement (1913).

Lady Gregory and Isabella also shared personal losses. In 1918, Lady Gregory wrote with the sad news that her son died in combat in World War I. Isabella, who also lost her only son, surely sympathized with her. The two women were close enough to confide in each other even through tragedies. 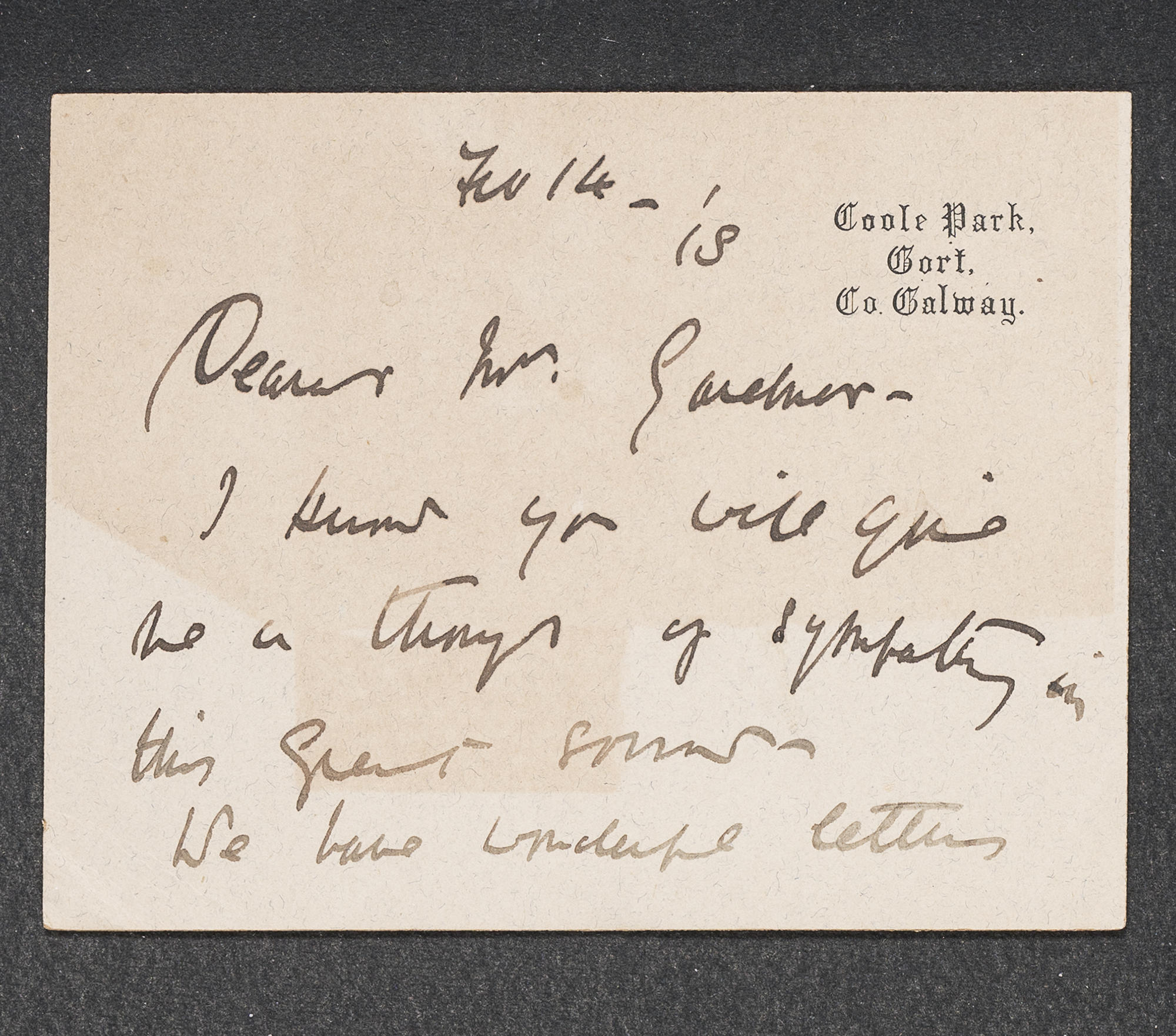 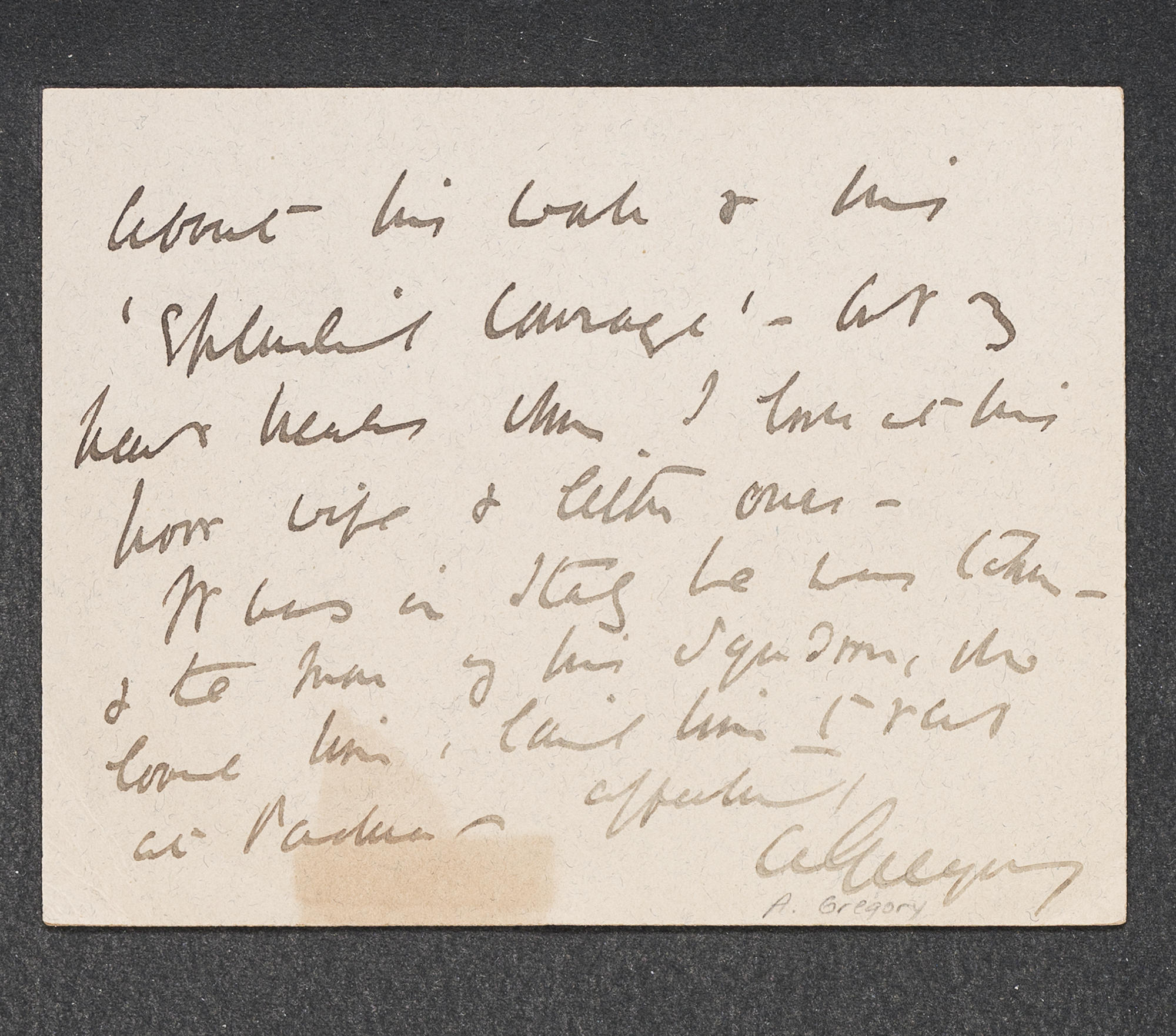 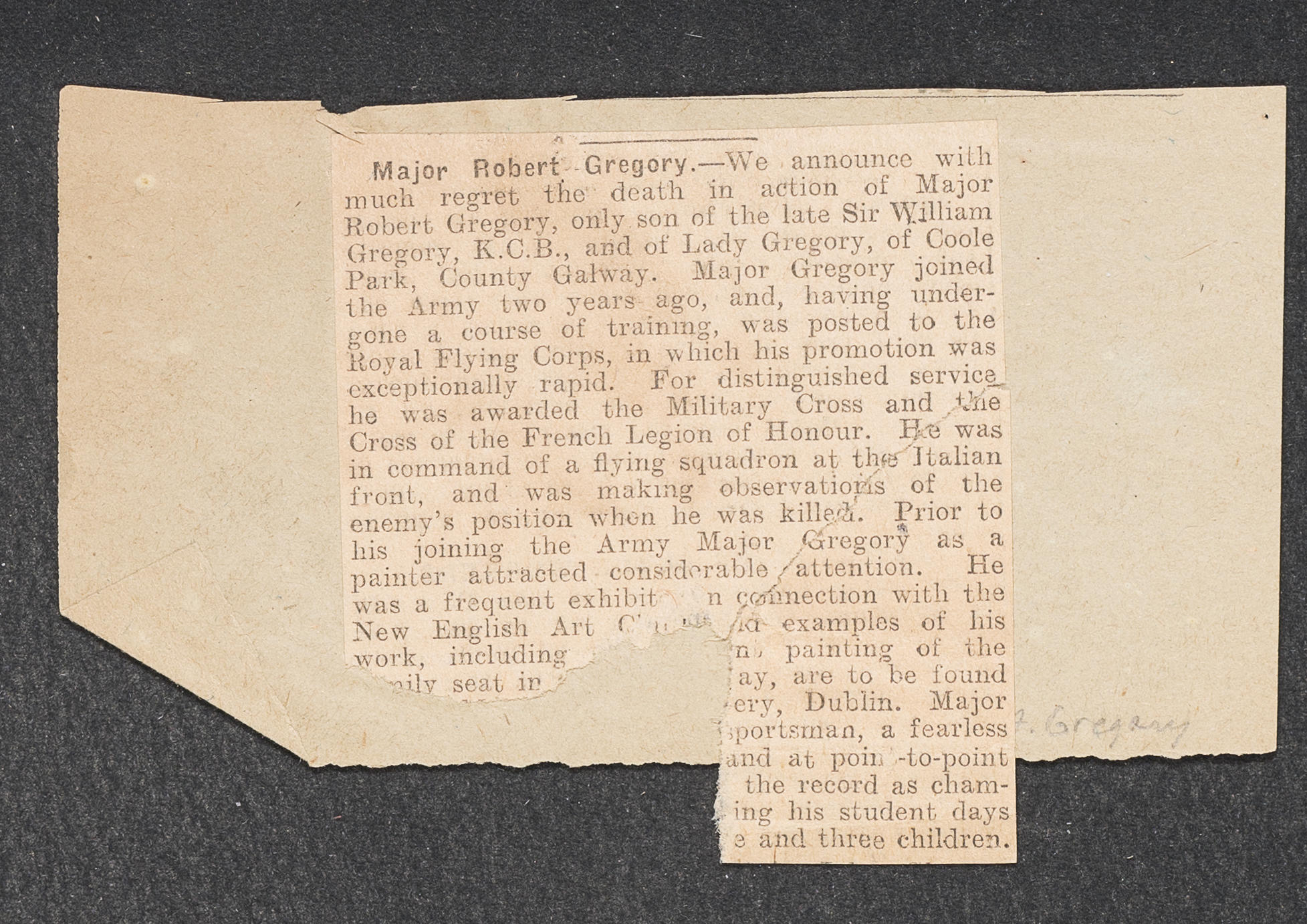 Newspaper clipping about the death of Major Robert Gregory in World War I, February 1918

These letters might seem like a smaller, less impressive part of the Museum's collection. However, this collection of correspondence shows us a less understood portion of Isabella’s story. She had many human, intimate moments while she was alive. She had deep friendships with notable women, such as Lady Gregory. Through their letters, we can better understand Isabella’s everlasting impact on her correspondents.