Learn a bit about how Isabella Stewart Gardner and John Singer Sargent both loved and were inspired by their travel to Spain.

John Singer Sargent was not only a talented artist; he sometimes served as an informal travel agent. Constantly on the move, Sargent traveled the world and provided vacation recommendations to his friends—where to go, what to see, and where to stay. While the artist may be best-known for his love and depictions of Italy, he was also fascinated by another southern European country: Spain.

Sargent traveled to Spain eight times, once as a child and seven times as an adult. He took his first extended (adult) trip there in 1879. In the wake of that journey, he created his most famous Spanish image: El Jaleo, which Isabella ultimately bought and displayed prominently in her museum—where it remains on view today.

Sargent probably inspired Isabella to visit Spain after the two became friends in the late 1880s. She and her husband Jack traveled to the Iberian Peninsula in 1888. The Gardners’ route, which is carefully recorded in diaries and travel albums, follows the rough advice that we know Sargent gave to others. He wrote detailed instructions to his friend Vernon Lee—one of the 19th century’s most successful female authors—in 1888:

“At Toledo mind you see a church within the walls with a tomb of a cardinal by Berruguete and a magnificent picture by [El] Greco in another church…At Madrid there is a little church outside the walls all decorated by Goya…Don’t judge Goya only by the things at the [Museo del] Prado & [El] Escorial.” Sargent even provided Lee with directions to the cigarette factory in Seville, a city in the south of the country, where the opera Carmen was set.1

Jack Gardner took a photo during the trip, including one of a street in Seville.

However, the most elaborate record of the Gardners’ trip remains a pair of travel albums that Isabella assembled on-site and are now held in the Museum Archives. Creating collages with a mix of printed materials and commercial photographs she purchased while visiting each new destination, Isabella carefully recorded the people and places she saw, as well the experiences she had. 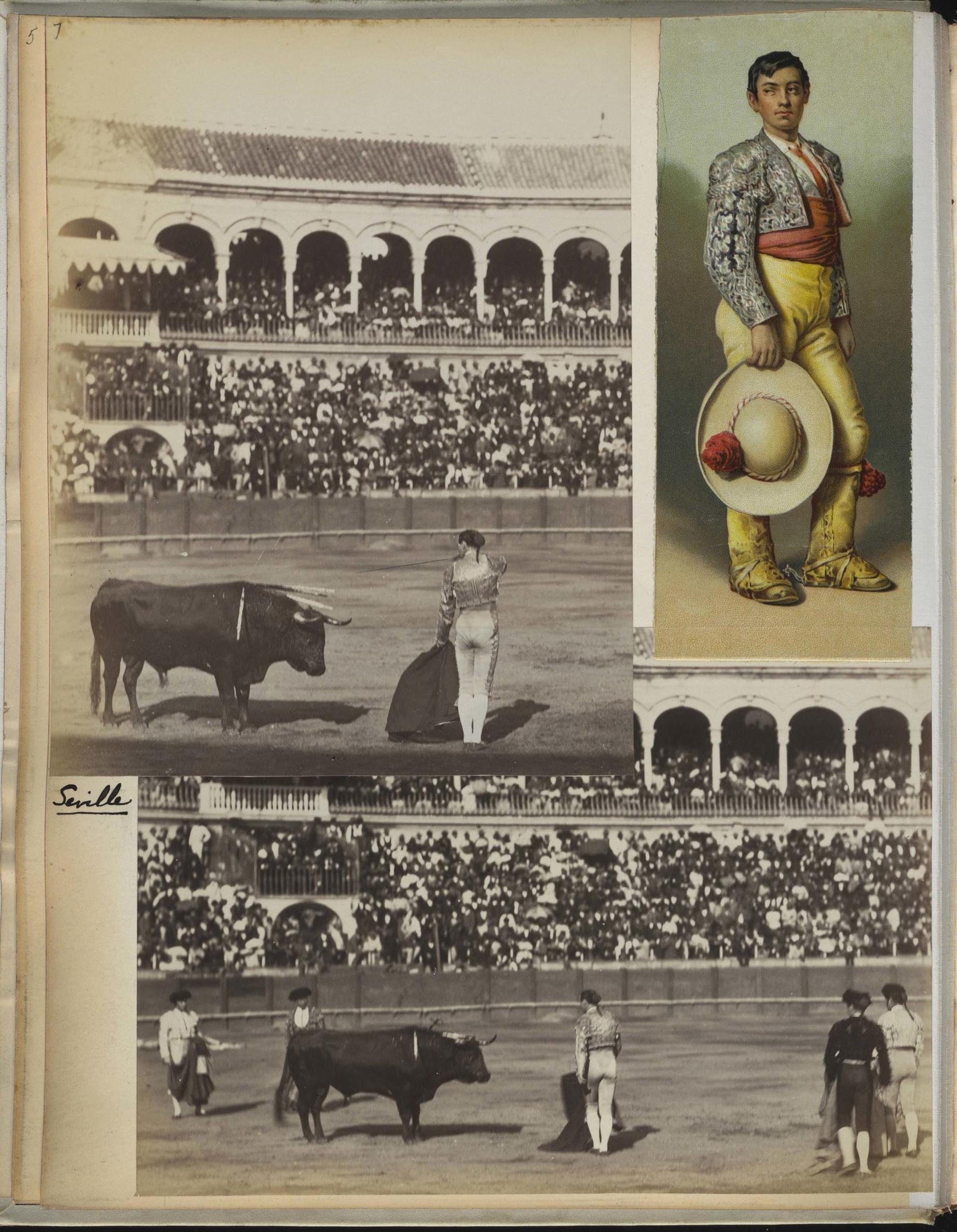 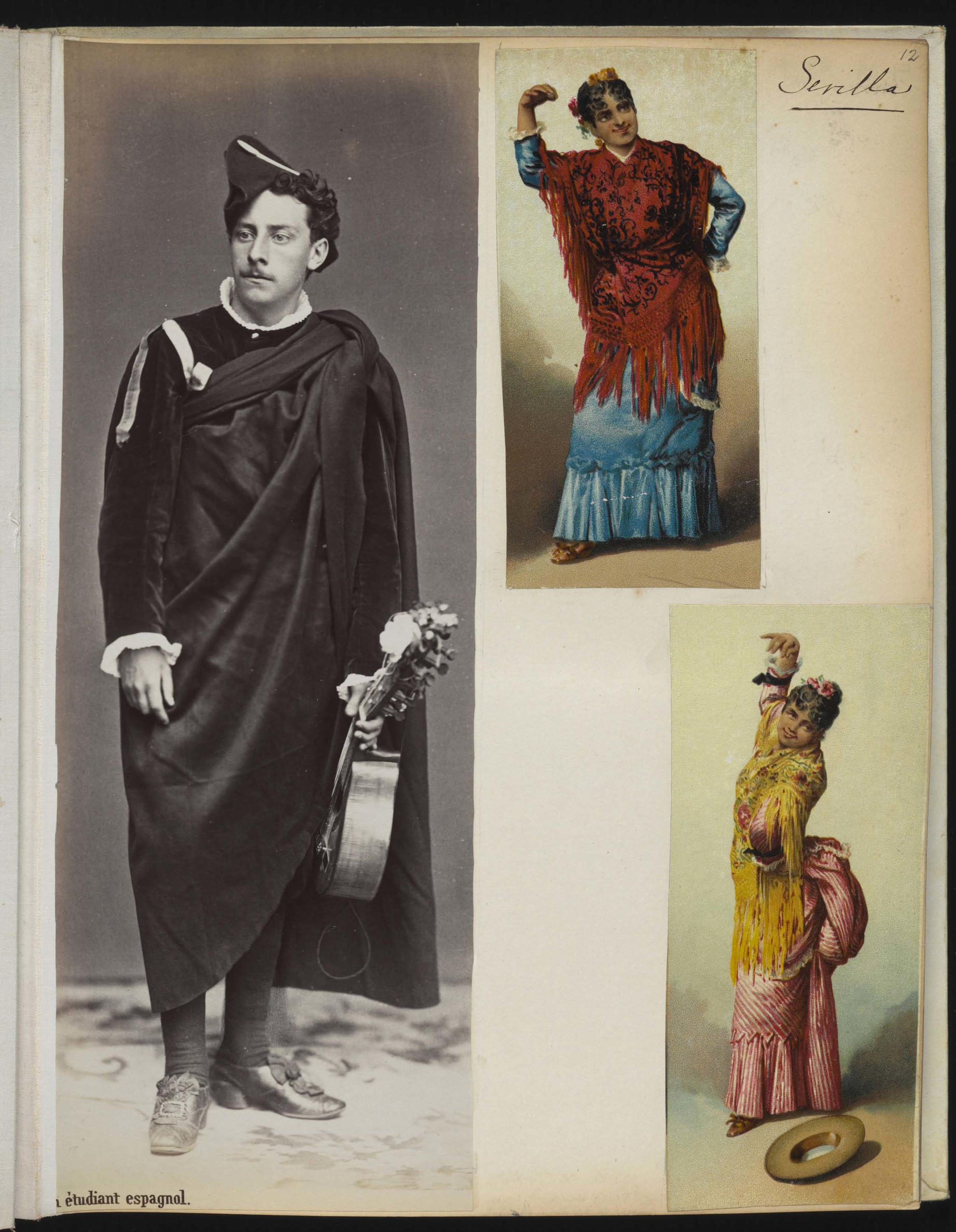 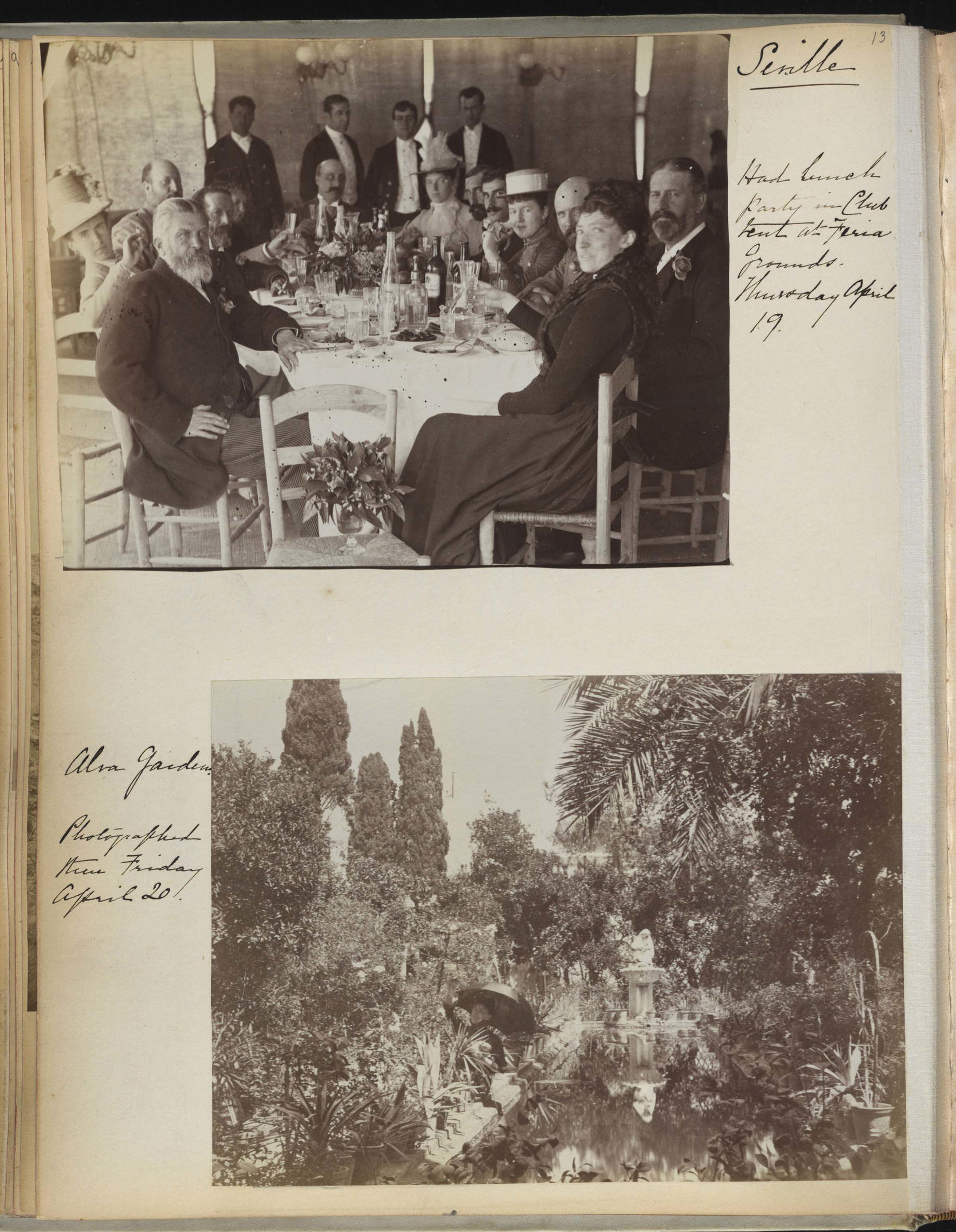 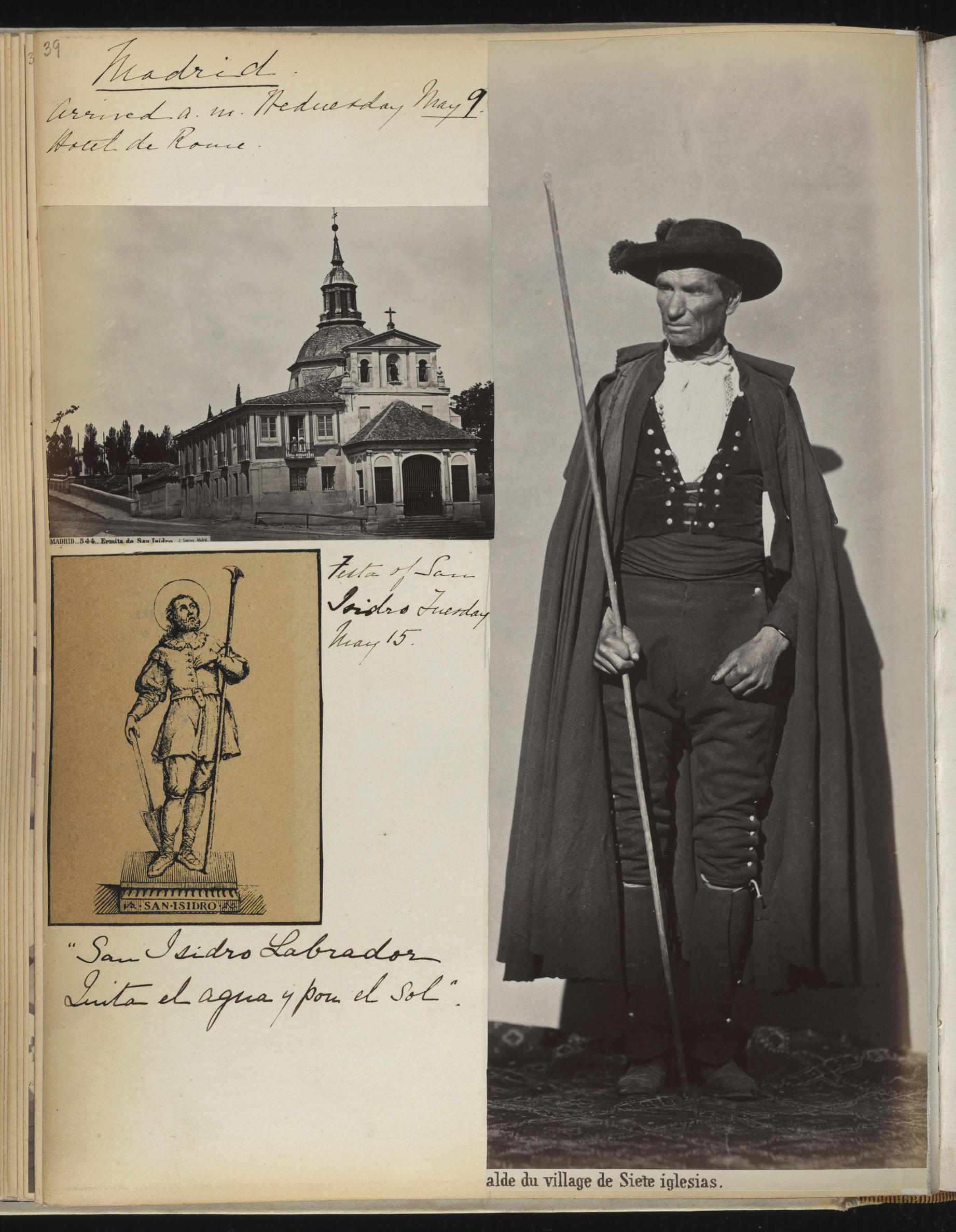 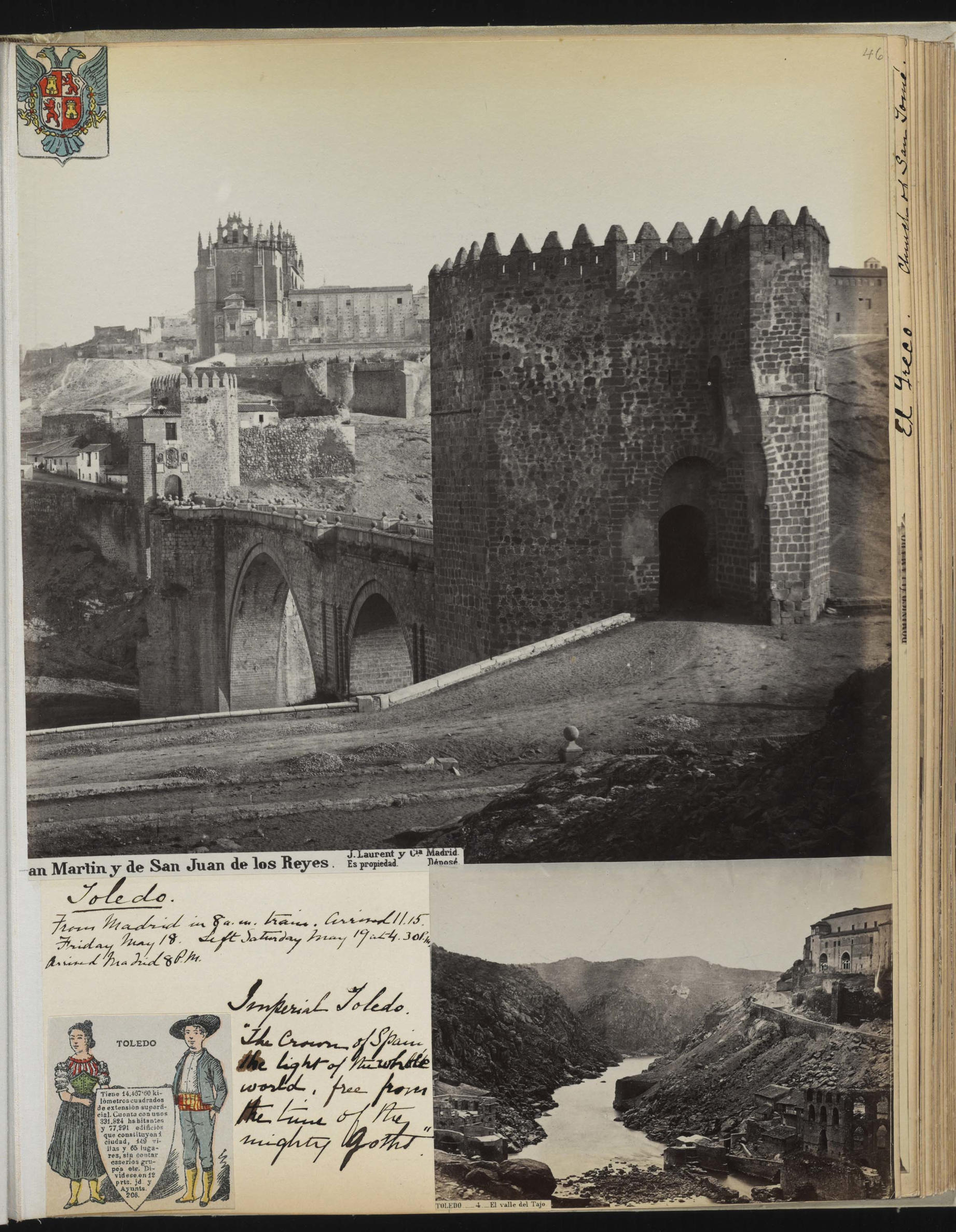 Sargent sketched to record his Spanish trip, as demonstrated by a beautiful drawing in the Museum’s collection that was probably completed on site in Seville in 1879 .

Isabella memorialized her experiences with collages and quick notes. While their methods of recording their travels were different, it is clear that the two friends were both fascinated by Spain and its culture.