Forever is a Long Time

What does it take to preserve works of art for generations of enjoyment and education? Learn more about art conservation at the Gardner, the renowned pioneer of modern conservation, George Stout, and a recent restoration project of the frame for Titian’s Rape of Europa.

What does it mean for a museum to be left “for the education and enjoyment of the public forever?” Preserving cultural property—material that has artistic, historical, scientific, religious, or social significance—at an institution like the Isabella Stewart Gardner Museum is the work of art conservators. The Gardner’s conservation department, officially founded in 1934, was the workplace of the most famous conservators in American history.

George Leslie Stout was born in 1897 and grew to be a man of many skills. In addition to being a painter, teacher, and avid traveler (much like Isabella Stewart Gardner herself), Stout was also a pioneer in uniting science and the arts. As a World War I veteran and Navy reservist, he returned to active duty at the start of World War II, where he worked to recover art and artifacts stolen by Nazis from hiding places like salt mines and churches. Stout performed these missions under a newly-formed unit called the Monuments, Fine Arts, and Archives section, also known as the “Monuments Men.” Settling in Cambridge in the twenties, he obtained a master’s degree at Harvard, and in 1955, he accepted the post as the Gardner Museum’s second director.

Often called the “father of modern conservation,” Stout developed and employed new techniques at the Gardner. One of Stout’s largest projects was in the Courtyard. He creatively refortified its central mosaic floor—excavated from a first-century Roman villa—using a combination of materials to provide better support and keep it from sinking into the soil. Other notable works in the Museum’s collection treated by Stout include Raphael’s portrait of Tommaso Inghirami and Sandro Boticelli’s Virgin and Child with an Angel.

Stout had worked with the Gardner’s objects long before becoming its director. Later, he helped devise innovative protection for some large paintings in the Museum’s collection. In the Gardner’s 1942 annual report, its first director, Morris Carter, said that “Acting upon advice from Washington urging all institutions to take measures for the protection from incendiary and demolition bombs of collections in their possession which might be considered national treasures… several of our larger frames were altered to allow the removal of the painting without taking the frame from the wall.” As the threat from World War II increased, several frames were rigged in this way to allow for the paintings’ expeditious removal should it become suddenly necessary. Stout removed the decorative corner cartouches on the beautiful 19th-century Italian frame that borders Titian’s Rape of Europa—altering its ornate appearance.

In a collection like the Gardner’s, frames are as much a part of the experience of seeing the paintings within them, and they are treated as works of art themselves. For the restoration of the Titian Room, a freshening up of The Rape of Europa’s golden frame was in order. An expert gilding conservator, Allison Jackson, painstakingly cleaned, consolidated, repaired, and in-painted the details of the frame to stabilize the condition of the surface and restore its original beauty. Allison repositioned the frame’s corner cartouches, using archival photos as references, so that the frame now more closely matches the appearance it had when Isabella acquired it. 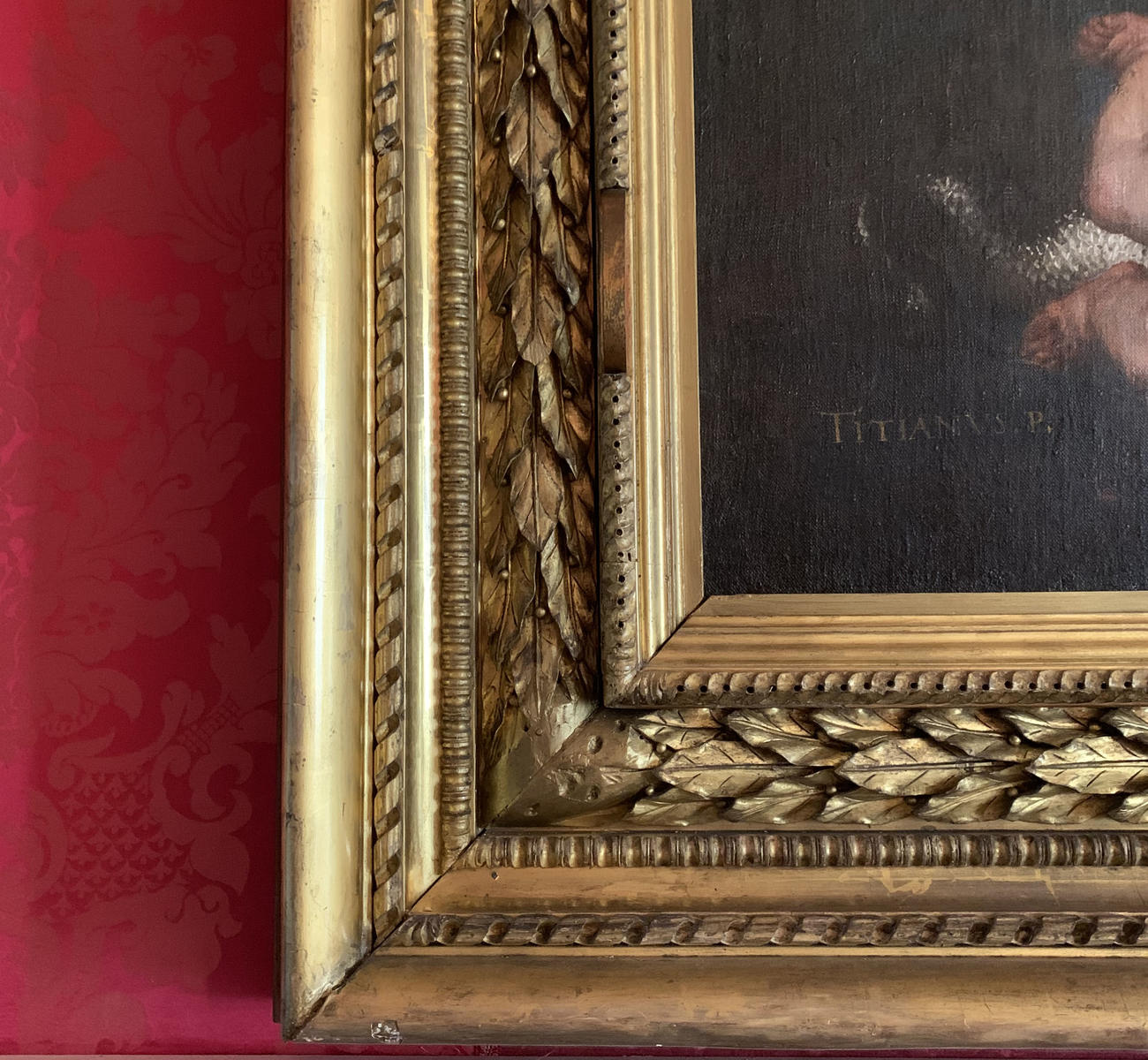 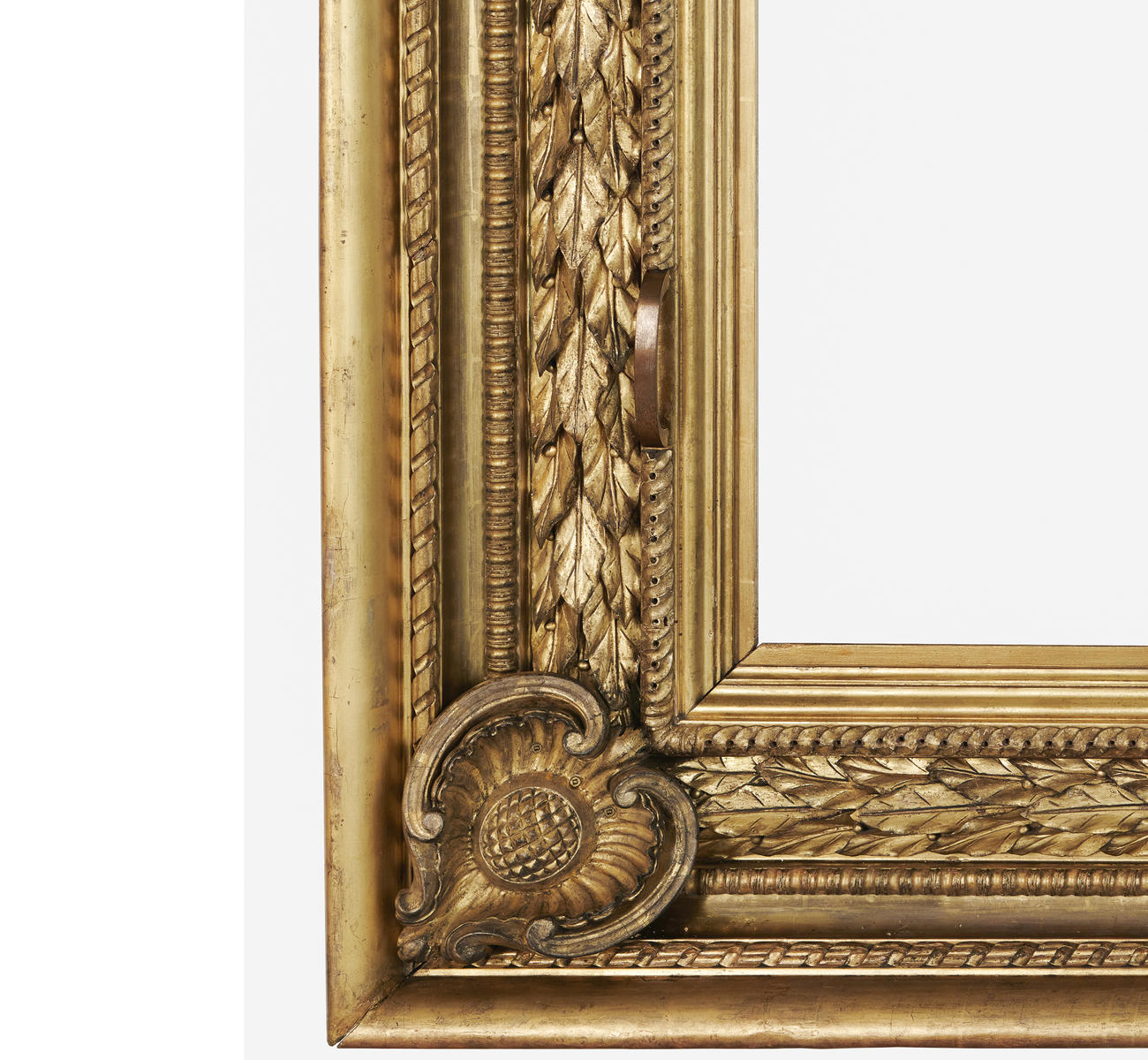 The Titian frame before and after treatment. You can see the corner cartouches have been restored to their original position.

Conservation plays an integral role in the collection that we see today. Conservators work closely with specialists like curators and collection maintenance technicians to ensure that the objects in the Museum’s care are safe. We can’t always see the changes they make—that’s sort of the point. But the legacy of early professional conservators is built upon each and every day.

Next time you’re at the Museum, pay some extra attention to the paintings’ frames. They have a little history of their own and some interesting stories to tell!

The Gardner Museum: Service in Times of Crisis