Learn how the Gardner’s conservation department maintains a 18th century silver beaker for museum visitors to enjoy for generations to come.

Most visitors to the Titian Room notice the silver beaker in front of Bellini’s Christ Carrying the Cross for the fresh flowers it holds, but the vessel has its own story.

This style of silver drinking vessel originated in Northern Germany and is often referred to as hansabeger or Hanseatic beaker—for the Hanseatic League, a medieval organization of merchants who dominated European trade from the 13th–15th centuries.¹ These were heavily produced in the Norwegian city of Bergen throughout the 15th–17th centuries.²

Silver was the most commonly used metal by goldsmiths in Norway who used more expensive gold for plating. The country's first goldsmith’s guild was established in 1568, and Bergen as part of the Hanseatic League had strict marking rules for the silver pieces produced. The guilds required the inclusion of five marks on silver pieces to identify the city, goldsmith, assay master (the person who inspected the quality of the alloy), month, and year of fabrication.³

The silver beaker in Titian Room—called a berger in Norwegian to describe footed drinking vessels that are stemmed or conical—was the first object I was assigned to treat in my position as Conservation Technician at the Museum. Isabella Stewart Gardner probably purchased it in 1867 on a trip in Norway with her husband Jack. Although the beaker dates to the 1700s when it was mostly used for drinking, Mrs. Gardner collected it as a mark of distinction or as a gift for her husband and never used it as a utilitarian drinking vessel.

Isabella isn't the only one who is assumed to have had affectionate sentiment for the beaker, the staff of the Museum's conservation department fondly refers to it as 'the technician's silver cup.' The Conservation Technician is responsible for keeping fresh flowers in the cup—a tradition started by Mrs. Gardner after her husband’s passing.

Curiously, the beaker is only stamped twice—with a goldsmith's or assay master's mark—out of the five anticipated hallmarks. Although I received help from colleagues at the Vesterheim Norwegian-American Museum who have two very similar beakers in their collection, I was unable to identify the marks— the goldsmith can not be identified without a city mark present.

Lions, the symbol of Norway, and winged cupids are common motifs often illustrated on many drinking vessels. The Gardner’s beaker exhibits six lion heads, soldered in place around the upper band of the cup. Three winged cupid heads wrap around the bottom of the cup. The concave dangles rimming the beaker are also common to this type, however it’s unusual that the dangles are convex beads (joined pairs instead of single dangles). Originally there would have been dangles from the bottom band, as well. The beaker’s rim and winged faces are accented with a gilding wash, possibly via a chemical process, where the gold is applied cold in an aqua regia dilution. It is also possible that the fire-gilding process was used to decorate the beads. This process involves applying a gold amalgam to the metal surface and then heating to volatilize the mercury in the solution.

Upon examination in 2020, I discovered that the degradation of a previous protective layer gave the beaker’s surface an overall iridescent appearance. The gilding had faded significantly on the lion and cupid heads. This is likely a result of numerous polishings. Previous polishings may have also disrupted the incised surface design and affected the depth and readability of the hallmarks. The exterior and interior metal surfaces have deep scratches, bright green corrosion and yellowish stains. Green corrosion products may be the result of using ammonia during a previous treatment. Ammonia dissolves copper from the sterling silver and forms soluble copper-ammonia complexes that react with gases in the air to form copper corrosion and turn the polish residue green.

In order to better understand the object’s method of fabrication, I performed Ultraviolet induced fluorescence photography (UV), X-ray fluorescence analysis (XRF), and Reflectance Transformation Imaging (RTI). UV photography identified the protective layer as lacquer. XRF analysis identified elements present in the alloy. This confirmed the presence of gilding and suggested the presence of mercury, probably a residual of the gilding process. RTI was carried out on the bottom exterior of the foot and allowed for a clearer view of the hallmarks, but unfortunately there is too much material missing to identify them.

I treated the beaker by cleaning off dirt and grime from the surface using an anionic detergent followed by multiple rinses with deionized water. After cleaning, I reduced the heavy tarnish with a lab-made precipitated calcium carbonate paste and rinsed multiple times again. Because the beaker is displayed in the open air, I applied two layers of nitrocellulose lacquer to protect the surface.

With the tarnish reduced, the beaker shows the wear it has sustained since Mrs. Gardner purchased it while still maintaining the expected luster of a brilliant silver vessel in good condition. 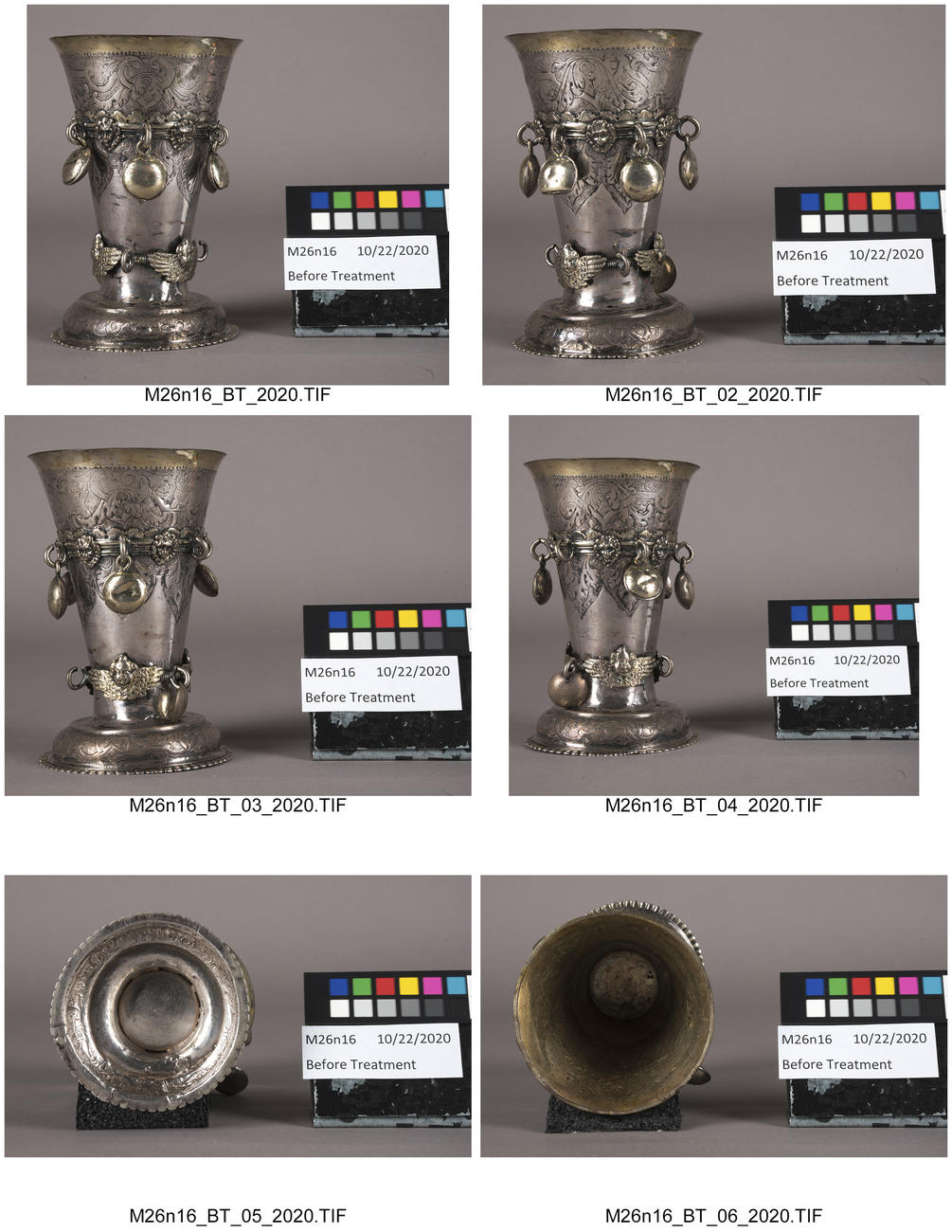 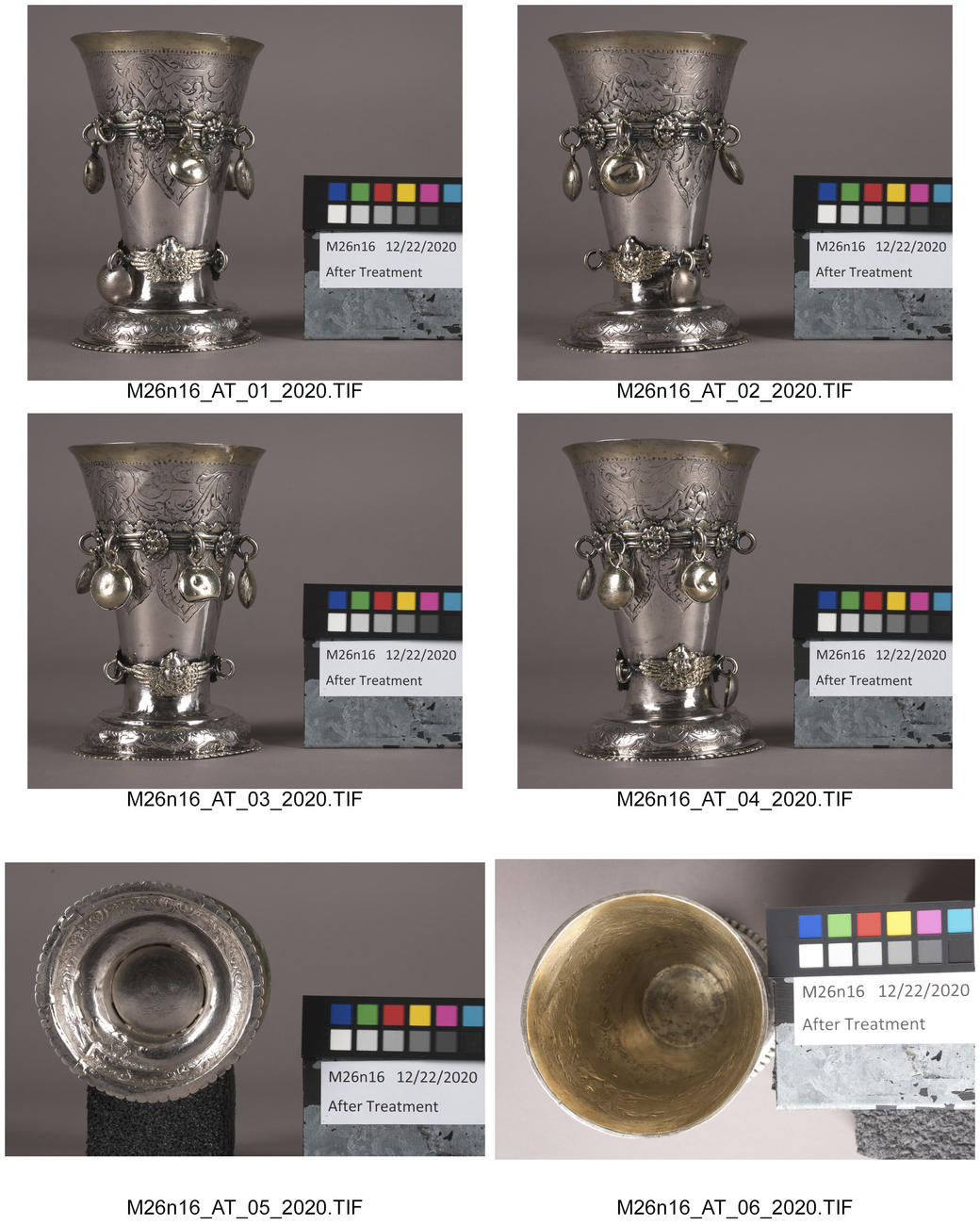 The Norwegian silver beaker before and after treatment, 2020

The conservation team cares for silver objects by handling them with clean cotton gloves to prevent the salts and oils from their hands marking the surface. Silver objects are not cleaned often because a layer of silver is removed along with the tarnish during each treatment. Instead, conservators prioritize adequate storage and select the proper protective coatings for display to minimize future tarnish. Furthermore, the Canadian Conservation Institute advises using a mild abrasive to clean silver over a longer period of time versus using a more aggressive material for a shorter time, as a better option for silver.⁴

Plan a visit to the Titian Room to catch a glimpse of the beger sølv and the floral arrangement it holds. Make sure to also stop by the Veronese Room for a peek at a similar silver beaker and check out the silver cabinet in the Dutch Room for more intricately decorated pieces.

Not Your Grandmother’s Silver Cabinet

¹ according to Norwegian silver expert Jorunn Fossberg.
² these continued to be made in the 19th century as gifts.
³ The Silver Treasure: The Art of Bergen’s Goldsmiths at the West Norway Museum of Decorative Art edited by Trond Indahl. Bergen: West Norway Museum of Decorative Art. Translated by Shari Gerber Nilsen, 2009.
⁴ Canadian Conservation Institute (CCI) Notes 9/7 - Silver – Care and Tarnish Removal.