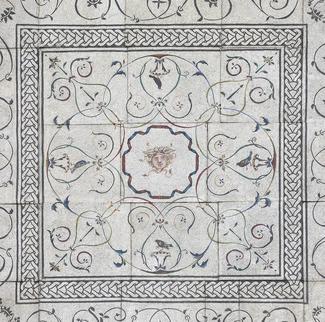 Mosaic Floor: Medusa
117-138 AD
Unknown
Stone and glass
In 1892 an ancient villa was discovered just north of Rome, near the villa of Augustus’s wife Livia. Several well-preserved mosaic floors adorned the baths of the villa. A second mosaic from the villa, showing two figures in Egyptian style, is now in the Metropolitan Museum of Art. Jack and Isabella Gardner inspected the mosaics in 1895 and purchased this floor in 1897. The delicate tracery of this mosaic resembles those made in Pompei around 25 AD (the late second or third style), but brick stamps indicate that it was laid a century later, during the reign of Emperor Hadrian.