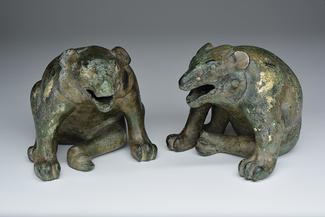 Mat Weights: Bears
about 206 BC - 9 AD
Unknown
Bronze with traces of gilding
Delightfully naturalistic, these two bears sit heavily and somewhat awkwardly on the ground. With one hind leg tucked under, each one opens its mouth in a friendly growl. The carefully observed depiction of the animals cannily matches their original function, for these bronzes were meant to weight down the corners of straw or textile mats that were placed on low platforms for seating. Made in sets of four, mat weights have been excavated in aristocratic tombs of the Han dynasty. Often finely crafted, they appear to be highly prized personal possessions of daily use that were buried with their owners to represent the continuity between the living world and the afterlife.

Bears emerged as favored subjects in the art and literature of the Western Han dynasty. They may have had been associated with protective nature spirits, although real bears could also have been seen in the royal zoo of the emperor Wudi (ca. 140–87 BC) at the capital Chang’an (present-day Xi’an). In fact, the bears in the Gardner Museum, which are unusually large mat weights, were apparently found near Xi’an in 1900.