Esther is one of a handful of female biblical heroes and someone who defied social norms for the greater good, qualities Gardner may have felt drawn to when building her collection.

Around age six, I donned a white beard made with cotton balls and dusted my hair with baby powder. This transformation from young girl to miniature old man was in service of my stage debut in the role of Mordecai during a performance of the story of the Book of Esther. The play was a traditional part of my Jewish day school’s annual celebration of Purim, a carnivalesque holiday celebrating the story of Esther and the salvation of Jews living in ancient Persia (present-day Iran). Fast forward twenty-five years, and I was reminded of my days as a first-grade thespian when I noticed that one of the Gardner Museum’s magnificent tapestries in the Third Floor Stairhall features a scene from this story.

Purim is ultimately a joyful holiday—involving costumes, performances, candy, and traditional cookies called hamantashen—but the biblical story it celebrates is serious and includes tragic moments. Around the fourth century BC, a king named Ahasuerus ascended to the throne during the Achaemenid Empire. During the party, the king asked for his wife—Queen Vashti—to appear before a group of men drinking with him. She refused and was summarily dismissed from her position for having defied her husband’s order. Looking for a new wife, Ahasuerus requested that beautiful young women be brought before him. Among the women was a Jewish orphan named Esther, who had been raised by her cousin Mordecai. When Esther appeared before the king she purposely hid her relationship to Mordecai and her Jewish identity, knowing Ahasuerus would not select a Jewish wife. The king chose Esther as his new queen.

Around this time, an advisor named Haman gained power within the king’s court. Esther’s cousin Mordecai refused to bow to Haman, as per a royal decree. Angered by this refusal, Haman sought to execute Mordecai and the Jews living in the Persian kingdom. Referring to the Jewish people, Haman said to Ahasuerus, “There is a certain people scattered abroad and dispersed among the people in all the provinces of thy kingdom; and their laws are diverse from all people; neither keep they the king's laws: therefore it is not for the king's profit to suffer them.”

Responding to this argument, Ahasuerus granted Haman’s wish to execute Mordecai and his people. Mordecai asked Esther to intervene with the King to stop the executions. After a series of events, the climax of the story occurs when Esther says to her husband, “If I have found favor in thy sight, O king, and if it pleases the king, let my life be given me at my petition, and my people at my request...For I and my people, to be destroyed, to be slain, and to perish.” With this declaration, she simultaneously reveals her Jewish identity and saves her people. Ultimately, the king condemns Haman to death and the ever-honorable Mordecai becomes his primary advisor.

The Gardner tapestry depicts a moment just before this resolution. Esther has seriously breached royal protocol by appearing before her husband without being summoned. Overwhelmed by the possibility of failing in her mission to save the Jewish people in Persia and facing potentially fatal punishment for the breach of protocol, she swoons and leans on her handmaidens. However, the fact that an enthroned Ahasuerus is extending a golden scepter towards his wife signals that he will not punish her for defying the normal rules of appearing before him. 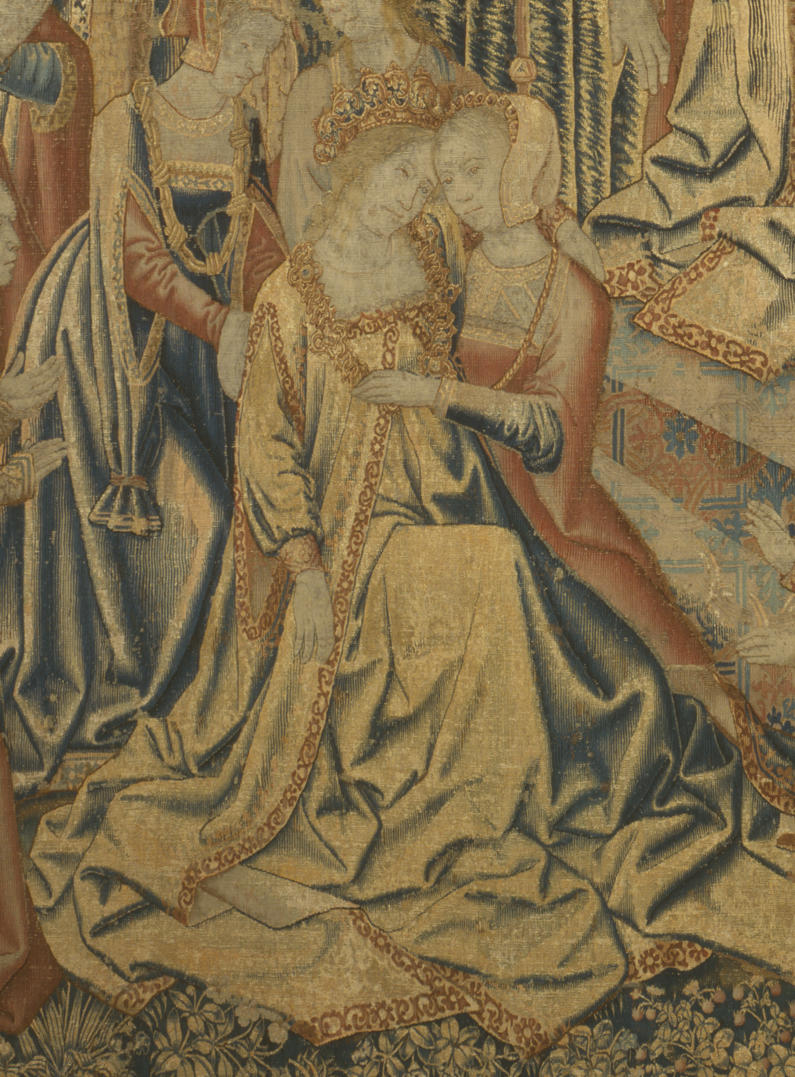 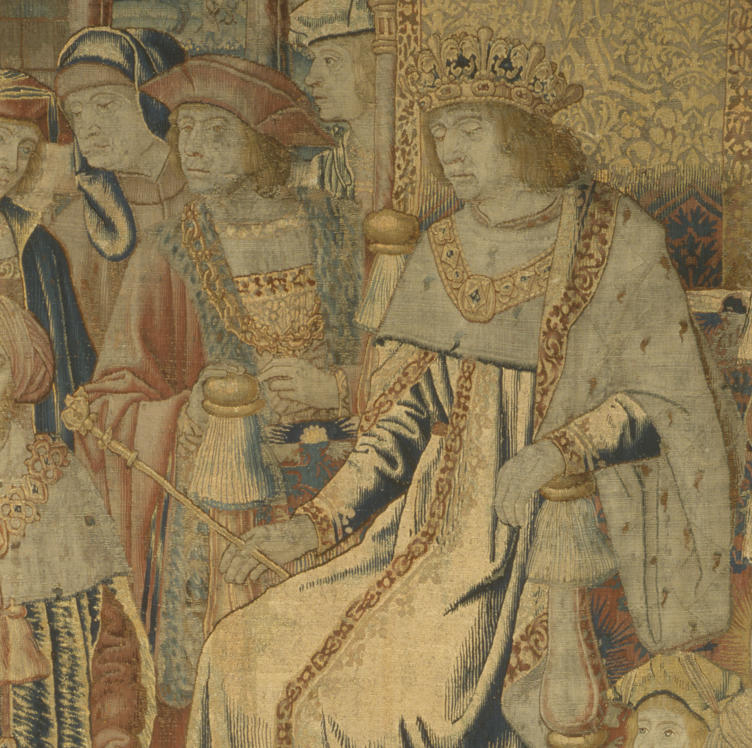 In this work, the king’s court was translated into the style of sixteenth-century Flanders, where the tapestry was made. The crowds of courtiers and Esther and Ahasuerus wear elaborate clothing that would have been common in early modern European courts. This setting and dress update the biblical story set in ancient Persia for the contemporary moment.

Depictions of Esther’s story—like those in two related tapestries in London’s Victoria & Albert Museum—were popular with powerful sixteenth-century European leaders. Both King Henry VIII of England and his advisor Cardinal Woolsey owned Esther tapestries. This choice of artwork is ironic. Like Ahasuerus, Henry VIII is best known for having multiple wives, several of whom he dismissed (and even executed). Like Haman and Mordecai, Woolsey served as a key royal advisor; however, Henry VIII ultimately stripped the cardinal of his power when he could not help the king annul his marriage to his first wife, Catherine of Aragon, in order to marry his second, Anne Boelyn. 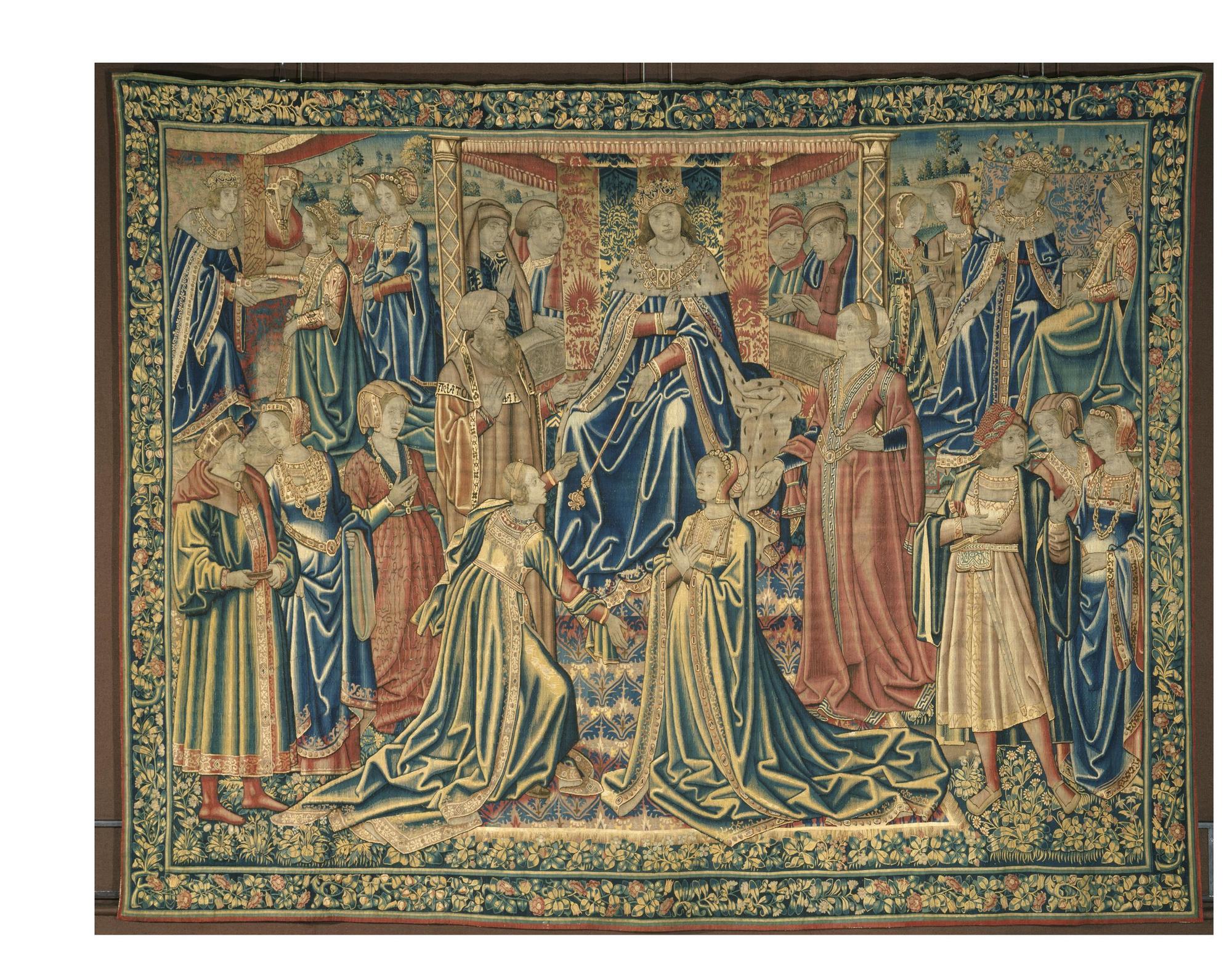 While it is unknown why the King of England and his advisor chose to collect depictions of Esther’s story, I like to think that there is a clear reason Isabella Stewart Gardner decided to acquire an image of the Jewish queen. Esther is one of only a handful of biblical female heroes. She is also specifically a woman who defies social norms for the greater good. Gardner herself consistently sought to defy social norms that governed her class and gender—including founding her museum for the greater good of “the education and enjoyment of the public forever.”

The Relics of Mary Queen of Scots