Take a deep breath and let your senses lead you through. You'll find those paths that Gardner laid out for you. You will instinctively find them. I've watched that happen when people walk into this place.

Through her slow and reflective studio practice, Stacy Lynn Waddell (b. 1966 Washington, DC) considers the authorship and idealism of art historical narratives and how they correspond to the economic and political structures of their time while highlighting contemporary issues related to visibility, desire, and power. Waddell’s subject matter includes floral motifs, landscapes, and figuration of different cultural eras. Source images are transformed by a variety of experimental and alchemical processes including heat and laser technology, embossing and debossing, physical distressing, and gilding as the most prominent.

Waddell builds layers of gold onto canvas to form an image. These luminescent monochrome works create provocative optical effects, similar to holograms. Images are never fully seen from a single vantage point; textured surfaces and modulations in shine require the viewer to physically shift positions in order to fully view the image. The work’s dependence on light and the surrounding environment ensures that the image is never fixed, enriching the observational process and forcing the viewer to slow down, look closely, and engage.

Waddell approached her residency at the Museum in the same way she approaches her work; with slow and deliberate consideration. Waddell spent two weeks at the Gardner in the spring of 2022 wandering the galleries, examining every detail, and feeling a unison with Gardner’s installation style, layering, and understanding of light. Viewing the collection under natural light conditions while the museum was closed, and at night by flashlight, were especially impactful experiences for the artist.

She notes, “The layering is amazing and the light reveals that. Where you have three or four different textiles and then a painting on top of that, and then an object in front of the painting. You get to see the complexity of the pieces. Not just the surface of the painting, but the frame and then all of the layers of textiles. It's astounding. It's really astounding. Shine, sheen, layers, light. At the Gardener, close looking is very important.” 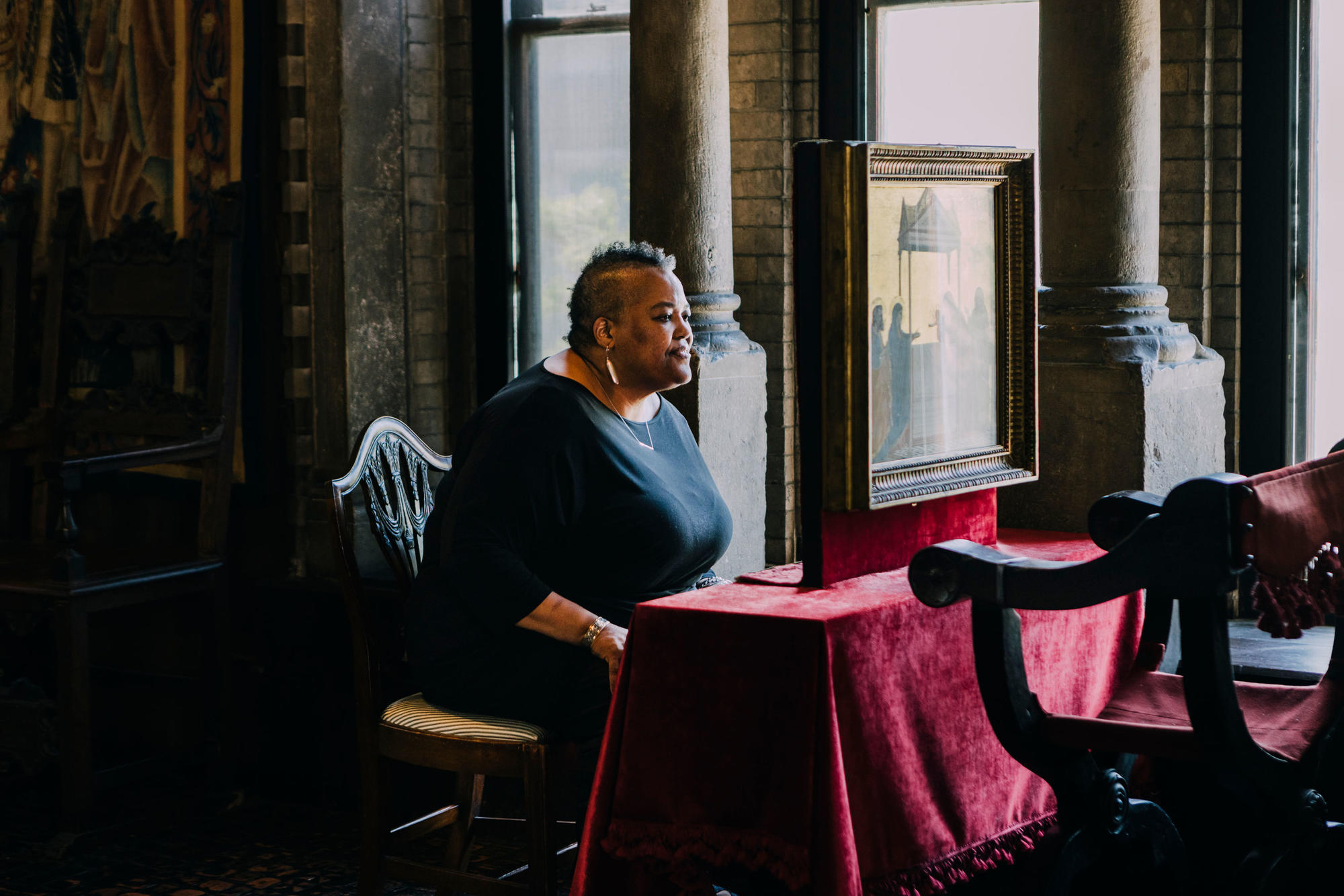 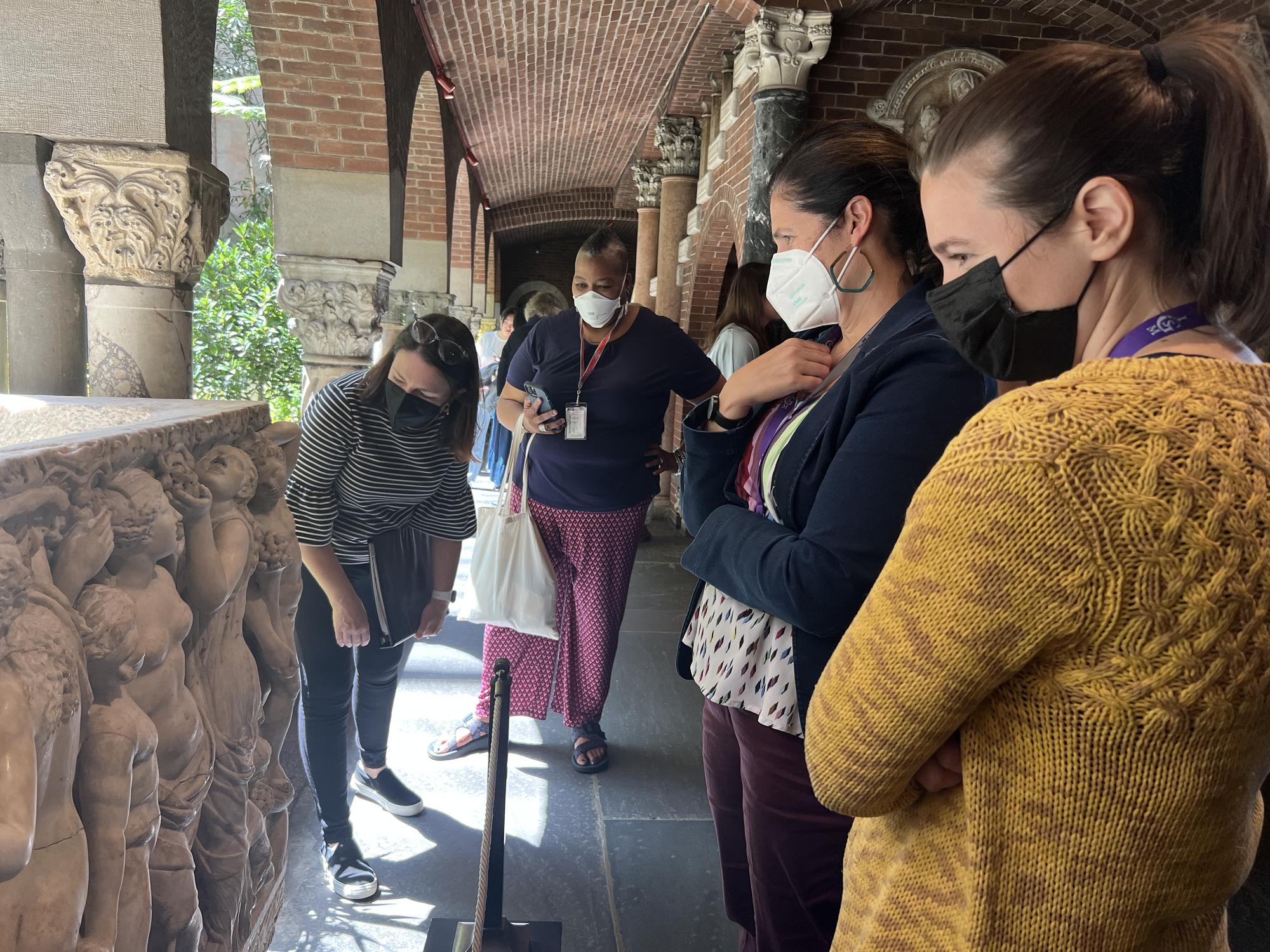 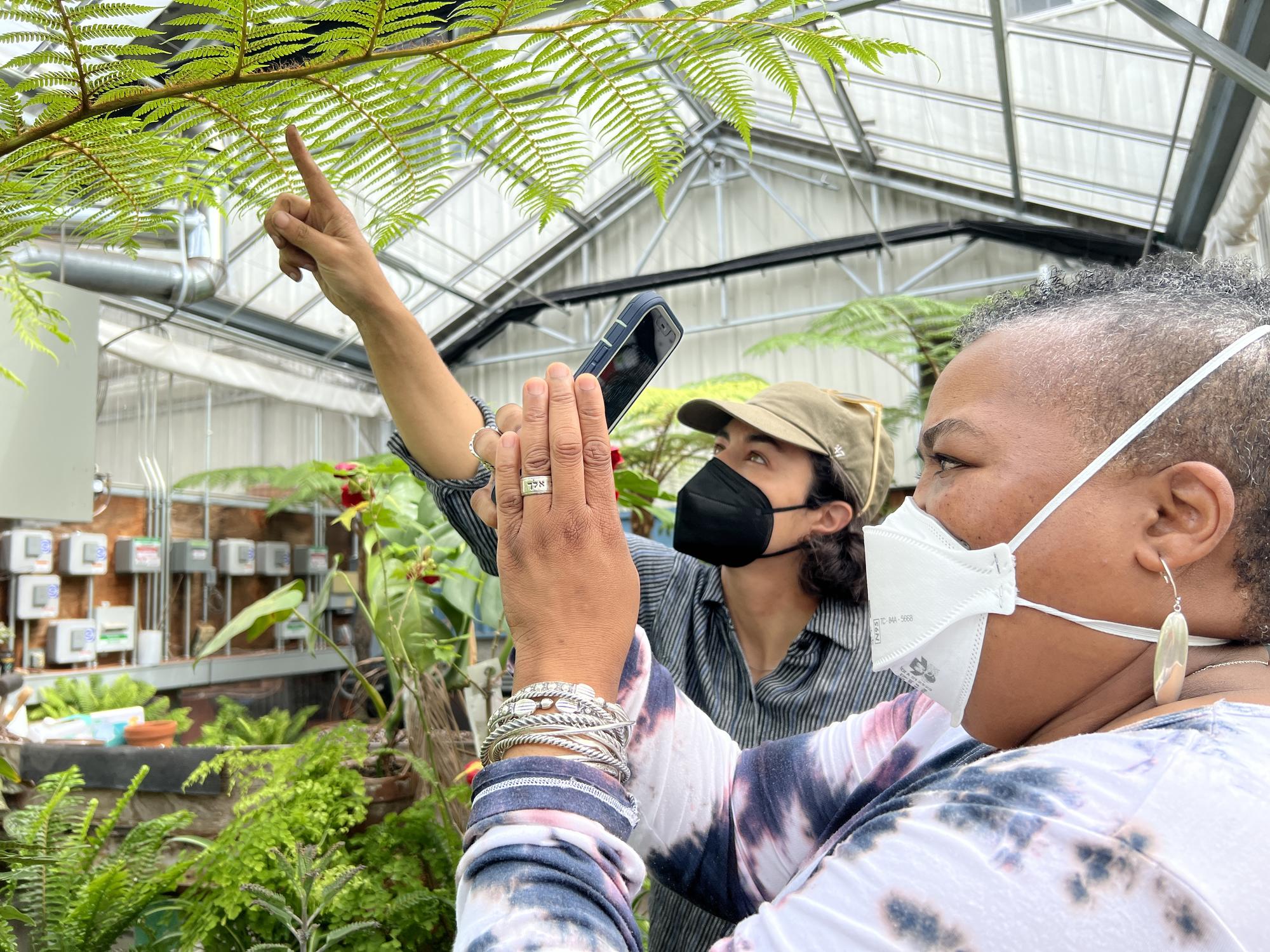 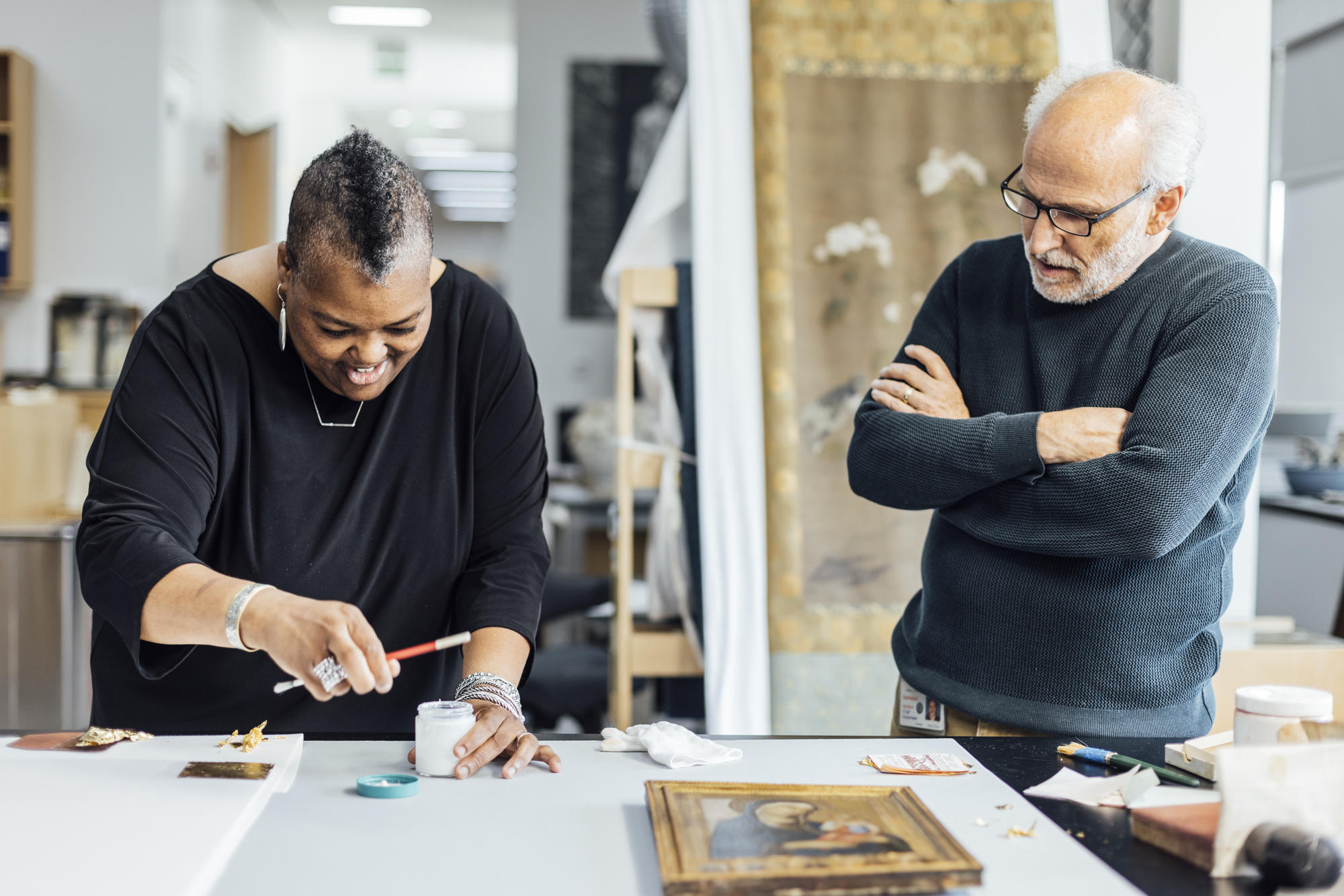 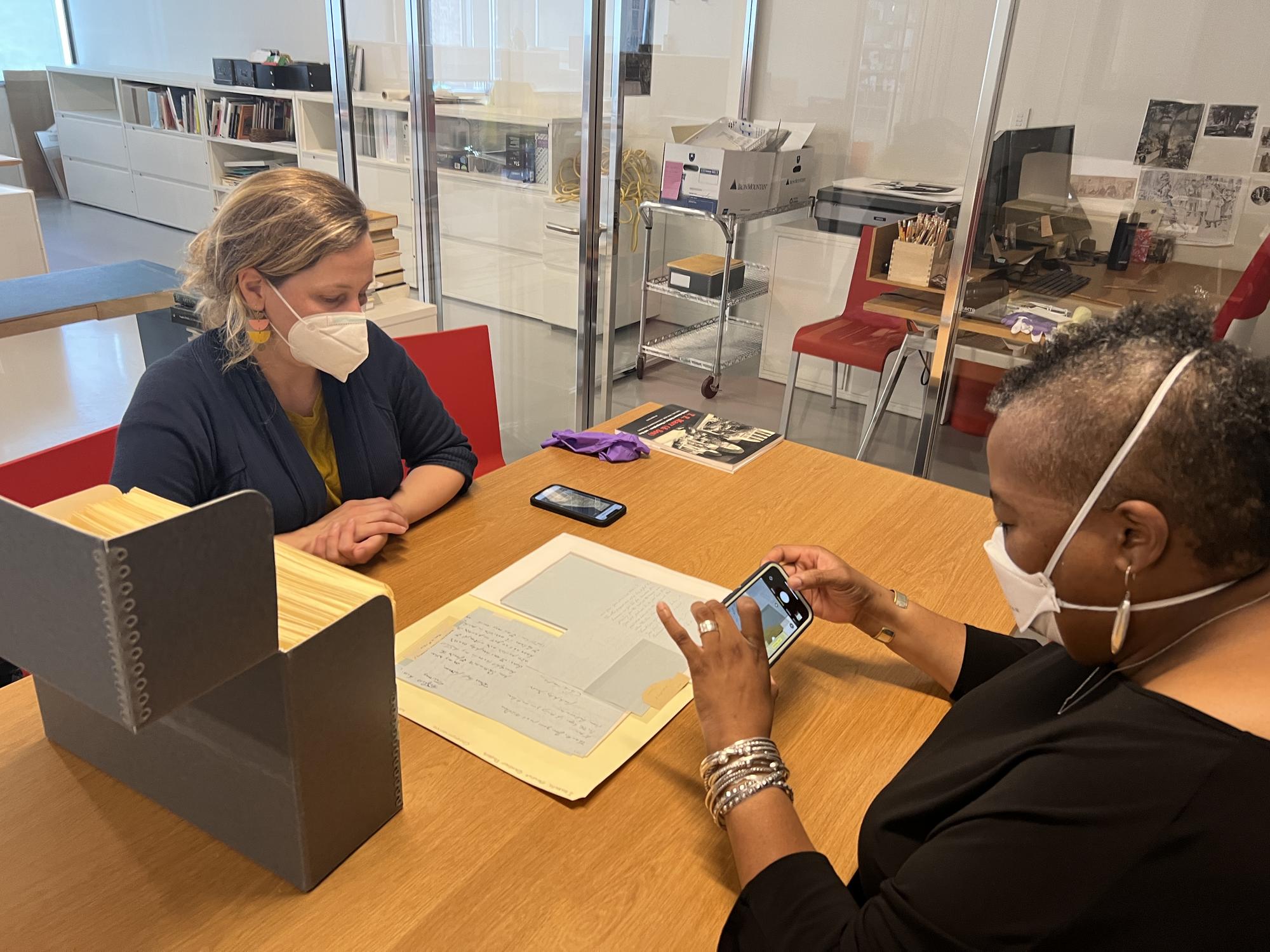 Artist Stacy Lynn Waddell explores the Gardner's historic Palace during her residency. Image courtesy of Bearwalk Cinema.
The artist toured the Gardner's Courtyard with members of the Conservation team.

Gardner archivist Shana McKenna and Stacy Lynn Waddell read a letter from American composer Charles Martin Loeffler to Isabella Stewart Gardner about gold tea paper she suggested he might use to decorate his new studio.

Waddell continued her close observations in the galleries with the museum's conservation staff. Her first visit was with textile conservation, looking at the different fabrics – on the walls, in frames, and on furniture – and discussing weaving techniques and the textile’s surfaces. The object conservation team highlighted works in stone that had once been gilded and painted. These include a Tabernacle in a Triptych from the mid-15th century in the North Cloister, a series of stone fruit baskets, from the 19th century, from the Courtyard, and the Farnese sarcophagus, from about 225 AD, one of the most important works of art in the Isabella Stewart Gardner Museum. Waddell was fascinated to learn that when this 2,000 year-old coffin was examined, studied, and cleaned in 2017, traces of gold and a rare pigment known as "Egyptian blue" was discovered on its surface.

She spent time in the archives researching the subject of light and the reflective tea paper Gardner installed in her dining room and in several of the galleries. She read correspondence between Isabella Stewart Gardner and Charles Martin Loeffler whom she helped to purchase gold tea-paper for the walls of his music room. Gardner also used silver tea-paper in the First Chinese Room (1903-1914) which was covered when she renovated the Early Italian Room in 1914. Waddell also viewed a poem, a handwritten gift from poet Rabindranath Tagore to Isabella Stewart Gardner in 1913, on the theme of inner light and Isabella’s own hand-written copy.

In addition to correspondence, Waddell browsed through the collection of photographs and the original glass negatives by Thomas Marr and Son; the photographers who worked with Gardner to document the museum. The firm photographed the museum from 1901-1926, as well as her homes in Boston at 152 Beacon St. and Green Hill in Brookline. Their photos capture the qualities of light in the galleries.

During her residency she also ventured outside the Gardner to tour the Museum’s greenhouses. Here she learned from the horticulture staff about the variety of plants specially grown for the Courtyard and how the lifecycle of the flora and fauna are managed from seed, through maturity, and into dormancy. She was able to visit the site twice and see how the plants grew and developed. Another field trip brought her to Mount Auburn Cemetery to visit the Gardner family crypt.

The highlight of Waddell’s residency however, was being able to hold and study a masterwork by Renaissance artist Simone Martini in the conservation lab. The Virgin and Child with Saints, about 1325, is a devotional work on wood panel that exemplifies the artist’s technical accomplishments and mastery of gold leaf. This work, normally installed in the Gothic Room, is one of several that will be on view during the Fall 2022/2023 exhibition, Metal of Honor: Gold From Simone Martini to Contemporary Art. The exhibition also features three portraits by Stacy Lynn Waddell. Waddell was especially struck by Martini’s skill with punchwork and the patinated surfaces that had developed over the centuries with the handling of this painting and devotional object.

I have often likened my time in the studio as a form of devotion to materials, processes and a type of nuance left behind by the human hand. Holding Martini’s Virgin and Child with Saints, I was immediately overcome with how the continuum of art history was happening in that moment. Martini and I spoke to one another and we are still communicating. History is rich, with lessons and revelations for how to move forward if only we would slow down and pay attention to what it has to say.

Waddell has also been invited to create a new work for the Gardner’s public art space on the Anne H. Fitzpatrick Façade. The work, entitled Home House, will be on view October 4, 2022 - February 7, 2023. She will be coming back to the Gardner in the spring to continue her residency.

Since earning her MFA from The University of North Carolina at Chapel Hill, Waddell has participated in exhibitions at The Studio Museum in Harlem and Brooklyn Museum in New York; Nasher Museum of Art, Durham, NC; Weatherspoon Art Museum, Greensboro, NC; The North Carolina Museum of Art, Raleigh; The Pennsylvania Academy of the Fine Arts, Philadelphia; Institute of Contemporary Art, Boston; Columbia College, Chicago; Speed Art Museum, Louisville and Atlanta Contemporary, Atlanta among other venues.

Her work is included in several public and private collections that include The Studio Museum in Harlem, Brooklyn Museum, Pennsylvania Academy of the Fine Arts, Crystal Bridges Museum of American Art, Nasher Museum of Art at Duke University, Weatherspoon Art Museum, Ackland Art Museum, North Carolina Museum of Art, and most recently The Mint Museum and Princeton University Art Museum among others.

Waddell is a recipient of a Joan Mitchell Foundation Painters and Sculptors Grant (2010), an Artist-in-Residence at Joan Mitchell Center in New Orleans (2017), Queen Space in New York (2018) and currently Isabella Stewart Gardner Museum. In Fall 2022, Waddell will end the year with an installation entitled A Moon For A Sun at Sala1 in Rome, Italy and as a Civitella Ranieri Foundation Fellow in Umbria, Italy where she’ll spend six weeks producing works and conducting research in a 15th century castle.

She lives and works in North Carolina.