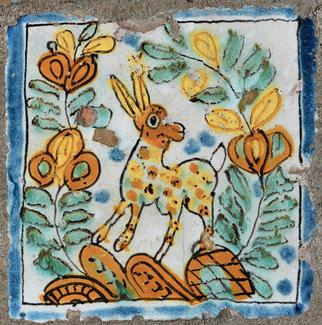 Tiles from the Church of San Agustin, Atlixco, Puebla
17th century
Unknown
Glazed terracotta
These brightly painted and glazed tiles are examples of ceramics broadly known as Talavera, produced in the Puebla region of central Mexico. These ceramics emerged after Spanish colonizers arrived in the region during the sixteenth century. In the wake of the establishment of imperial rule, Spaniards familiar with the process of making tin-glazed earthenware began to settle in Puebla. Local craftspeople learned these methods and Talavera developed as a blend of indigenous Mexican imagery with Spanish methods and motifs. Many ceramic workshops were established to produce a range of products, and Puebla became famous for this type of earthenware. Buildings throughout the region are decorated with tiles like these; the ones here were probably made for the Church of San Agustìn in the city of Atlixco.


Though Isabella had traveled to Mexico in the 1880s, she only briefly visited the north of the country. In 1909, her friend, American artist Dodge Macknight, was traveling around Mexico and acted as her agent to purchase the tiles directly from the church. After acquiring the tiles, Isabella spent hours assembling the nearly 2,000 painted and glazed tiles into the pattern we see today on the walls of the Spanish Cloister.