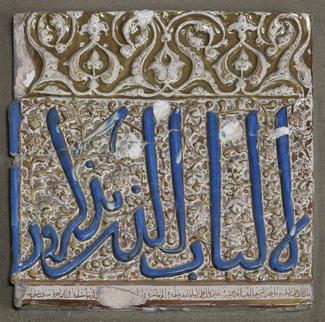 Tile from a Mihrab
about 1215
Unknown
Ceramic with cobalt and luster glazes
This beautiful tile formed part of the frieze in a prayer niche of a mosque. Called a mihrab, this niche or arch in a wall marks the direction towards Mecca, toward which worshippers face during prayer. The inscription, in large dark blue script, is a verse from the Koran. The rich decoration consists of intertwining foliage and a patterned band at the top. Various blue glazes are balanced by copper luster glaze. Two other tiles from the frieze are in the Victoria and Albert Museum, London.