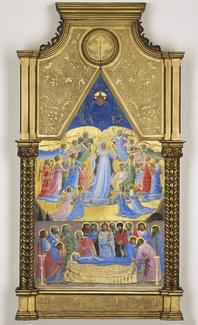 The Dormition and Assumption of the Virgin
1424-1434
Fra Angelico
(Vicchio, about 1400 - 1455, Rome)
Tempera with oil glazes and gold on panel
Fra Angelico’s technical and compositional innovations paved the way for a more modern manner of painting in Florence, and he found favor with important patrons, including two popes. This panel is the third in a set of four reliquaries, or containers for holy relics, depicting episodes from the Virgin’s life.

Nineteenth-century enthusiasts celebrated this Dominican painter “Fra Angelico” (the angelic friar) for the spiritual content and lyrical quality of his work. Most of his paintings in the United States are the surviving fragments of larger works, but this one is nearly intact and was greatly admired in Boston. Gardner’s friend the American painter John La Farge, whose works can be found in the Blue Room, once reminded her that even Robert Langton Douglas, a British art critic and director of the National Gallery of Ireland, praised Gardner’s Fra Angelico in his writings.
Read More Read Less
Explore Object Details
00:00 / 00:00