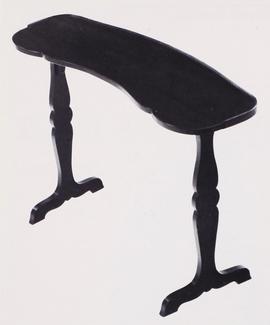 Sofa Table
early 20th century
Elsie de Wolfe
(New York, 1865 - 1950, Versailles)
Beech
Time and time again Gardner juxtaposed modern design with old masters.  A good example of this practice is a beech sofa table by the legendary New York designer Elsie de Wolfe that Gardner transformed into a silk-covered altar for her sparkling tabernacle by the fourteenth-century Sienese painter Bartolomeo Bulgarini.  Unlike other society grandes dames, Gardner was not de Wolfe's client, but she did support female professionals, and the two New Yorkers forged a friendship based on their shared love of beauty. De Wolfe declared in a newspaper article that Gardner had no equal in America. She made a final visit to the museum near the time of Isabella's death, comparing her host's pallid appearance to "primitve pictures of saints."