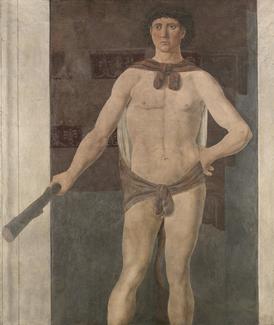 Hercules
about 1470
Piero della Francesca
(Sansepolcro, about 1415 - 1492, Sansepolcro)
Tempera on plaster
This fresco once adorned Piero della Francesca’s house in Borgo Sansepolcro. The painting was originally positioned in the upper corner of a room, with its right edge bordering a wall, which helps explain the steep perspective of the image. Hercules stands at a threshold. Beyond, we can see a ceiling with wooden beams decorated with foliage. There is no evidence that the room was decorated with other gods or heroes, as might be expected. Further, Piero della Francesco chose to portray Hercules as a youth, rather than as the bearded, muscle-bound figure familiar in ancient sculpture. Certainly the ideal nude was a central theme of the Italian Renaissance. However, it remains a mystery what this image of the young Hercules might signify in the painter’s private dwelling, although the hero was commonly associated with civic virtue and goodness. Perhaps the painting of a classical nude in unusually steep perspective was a compelling artistic challenge for Piero.

Mrs. Gardner’s attempt to acquire the fresco was also Herculean. The fresco had been detached from the wall in the 1860s and in 1903 it was sold to Gardner by the Florentine dealer Elia Volpi, with the assistance of Joseph Lindon Smith. However, the Italian government delayed the work’s export until 1908, and when it arrived in America, it was seized by customs officials for payment of duty and fines. At Fenway Court, it became the centerpiece of a new gallery of early Italian pictures where it was displayed in front of a flame-stitched embroidery.