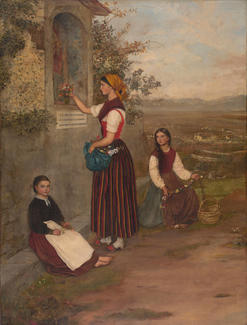 Decorating a Shrine
1865
Francesca Alexander
(Boston, 1837 - 1917, Florence)
Oil on canvas
Esther Frances (“Fanny”) Alexander was born in Boston in 1837 and moved to Florence, Italy with her parents when she was a teenager. Early in her career, Esther created drawings of poor Tuscan farmers for American donors to help support her mother’s charity work in the region. In this painting, commissioned by Isabella’s mother-in-law, the landscape we see below the shrine is a view of the Val d'Arno from the hill of Bellosguardo outside Florence, where Alexander was living with her mother. The shrine is inscribed, “In thee mercy, in thee pity, in thee great works, in thee is united whatever there is of goodness in creation,” reflecting Alexander’s interest in religious subjects.

Alexander met English art critic John Ruskin in 1882 and he became interested in her images of local life and translations of Tuscan songs. Over the following two decades he published many of her works to great success in the United States and Great Britain.  Several of Alexander’s books are in Isabella’s collection.