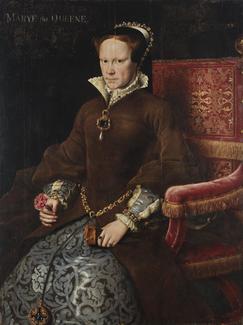 Mary I, Queen of England
1554
Antonis Mor and Workshop
(Utrecht, Netherlands, 1512-1516 - about 1576, Antwerp, Beligum)
Oil on oak panel
Mary Tudor (1516–1558) was the only surviving child of England’s Henry VIII and his first wife, Catherine of Aragon. Mary became queen in 1553 and married Philip, heir to the kingdom of Spain (later Philip II). Although this portrait was painted as an engagement present for her future husband, Mary looks somber. Given that her marriage was meant to seal an alliance between England and Spain, perhaps it’s appropriate that this portrait emphasizes Mary’s power and status. Antonis Mor was the most successful portraitist of his day. Official portraits were frequently copied to be given away to other rulers and family members. The first version of this painting is now in Madrid.