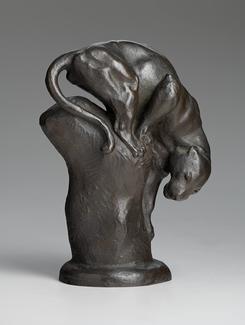 Reaching Jaguar
before 1918
Anna Hyatt Huntington
(Cambridge, Massachusetts, 1876 - 1973, Bethel, Connecticut)
Cast bronze
This bronze sculpture shows a jaguar balancing carefully on a tree trunk. The feline’s taut muscles and intense gaze are brimming with kinetic energy. He has spotted his prey, and is moments away from attack.

The prominent American sculptor Anna Hyatt Huntington was well known for her depictions of animals. Operating in an artistic realm that was dominated by men, she was a trailblazer and won awards for her sculpture across the globe. Her bronze equestrian statue of Joan of Arc, located just outside of New York’s Central Park, was the first public monument created by a female artist in New York City. In addition, it was the first public monument to depict a woman in the city when it was erected in 1915. It seems apt that Isabella Stewart Gardner, another woman ahead of her time, would have collected the work of this pioneering artist.
Read More Read Less
Explore Object Details