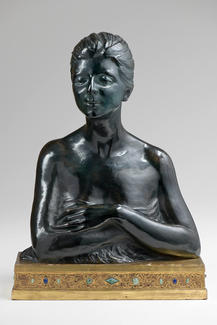 Maria de Acosta Sargent
1915
Anna Coleman Ladd
(Philadelphia, 1878 - 1939, Boston)
Bronze
Anna Coleman Ladd was born in Philadelphia in 1878. She studied sculpture in Europe and moved to Boston after her marriage in 1905. Ladd became one of the most prolific sculptors in the city and even published two novels. In 1915, her Triton Babies Fountain was installed in the Boston Public Garden, where it remains today. Ladd and Isabella were friends, and the two exchanged many letters—including one that references this bust that Isabella purchased directly from the artist. The model for this work was Maria de Acosta Sargent, the wife of Andrew R. Sargent, presumably a distant relative of the artist John Singer Sargent. Shortly after Ladd made this bust, she found a novel use for her sculptural skills. In late 1917 she founded the American Red Cross Studio for Portrait-Masks to provide prosthetic masks for men who had suffered severe facial injuries during World War I.