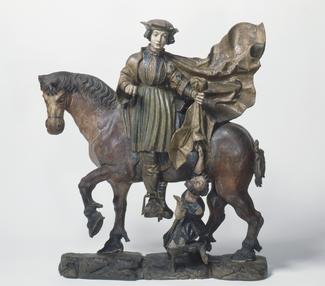 Saint Martin and the Beggar
about 1520
Unknown
Polychromed lindenwood
The young Saint Martin was a Roman soldier in France. One bitterly cold day he came upon a crippled beggar. Martin cut his military cloak in half in order to share it with the beggar. That night Christ, dressed in half of the cloak, appeared to Martin in a vision and commended the young soldier for his kindness and charity. Martin later became bishop of the French city of Tours. Conceived as a relief to be placed against a flat surface, this lively sculpture shows the saint dividing his cloak. Both the relative sizes of the figures and the contrast in their clothing emphasize the differences between them.