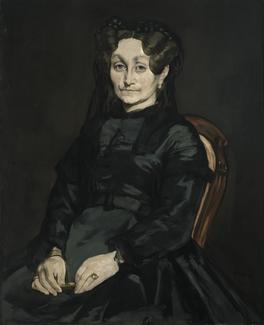 Madame Auguste Manet
1863
Édouard Manet
(Paris, 1832 - 1883, Paris)
Oil on canvas
This portrait of the artist’s mother, Eugénie-Désirée Fournier Manet, shows her dressed in mourning for her husband, who had died the year before. The thick swatches of black and dark gray paint that form the dress resonate against the lighter, flat paint of the face and hands. The painting is essentially monochromatic and possesses a solidity reminiscent of Manet’s beloved Velázquez. Bernard Berenson called the work “a colossal thing.”

Manet’s mother had encouraged his painting from the beginning, and she remained a close confidant. His stepson described the relationship between Manet and his mother as more than close: “Edouard Manet did not have just an ordinary filial affection for his mother, but rather a real obsession."

In 1909, Isabella Stewart Gardner asked Berenson to find her a portrait by Manet, perhaps to accompany her portrait of Madame Gaujelin by Degas. Both sitters present severe personalities, and both painters found an underlying sympathy beneath these formidable exteriors.