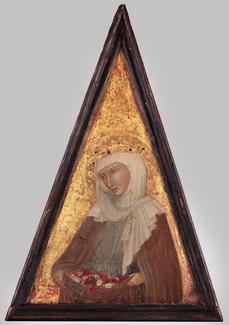 Saint Elizabeth of Hungary
1319-1347
Ambrogio Lorenzetti
(Italian, 1285 - about 1348)
Gold and tempera on panel
Elizabeth (1207–1231), daughter of the king of Hungary, renounced the world to devote herself to caring for the sick and the poor. This painting formed one of the pinnacles (triangular points) of a dismantled altarpiece made for a church in Massa Maritima, Italy. In 1917, Isabella Stewart Gardner received it as a gift from the essayist and poet John Jay Chapman and his wife Elizabeth in memory of his son Victor who was the first American pilot to die in World War I. She placed the painting on an easel before a French chasuble (a priest’s stole) so that the floral pattern of the chasuble echoes the flowers the saint holds in her cloak.