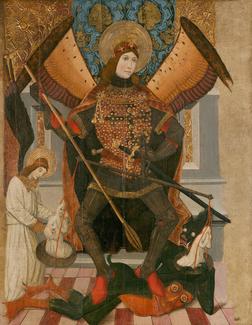 Saint Michael Archangel
about 1470
Pedro García de Benabarre
(active Catalonia, 1455 - 1480)
Tempera and gold on panel
The archangel Michael, wearing a suit of studded armor, sits on a throne backed by an elaborate blue and gold brocade. In this painting, Michael simultaneously enacts his two principal roles: weigher of souls on Judgment Day and destroyer of Satan. On the left an angel embraces a soul, while on the right, Satan appears as a fantastic two-faced monster ready to capture another
soul. Michael positions his lance over the monster. This painting was originally a side panel of a large altarpiece dedicated to John the Baptist, installed in the church of Sant Joan del Mercat in Lleida, Catalonia.