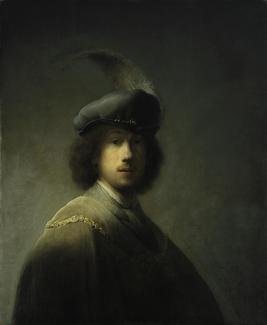 Self-Portrait, Age 23
1629
Rembrandt van Rijn
(Leyden, 1606 - 1669, Amsterdam)
Oil on oak panel
Rembrandt produced more self-portraits than any other painter in the history of European art; more than eighty of them survive. In this image, the young Rembrandt evokes an extraordinary range of textures, from the gauzy silk of the scarf to the downy feather of the cap.

The demand for Rembrandt paintings in Gilded Age America surpassed that of any old master painter. Few collectors managed to acquire one, let alone four (when she purchased the Landscape with Obelisk, now attributed to Govaert Flinck, she believed it too was by Rembrandt). According to the museum’s first director Morris Carter, this was the first painting that Gardner purchased with “the intention of developing a real museum collection.” Having acquired this painting, which Bernard Berenson described as “one of the most precious pictures in existence,” all future purchases would need to match not only its extraordinary artistic quality but also its aristocratic provenance. Prior to its arrival in Boston, this painting belonged to several noteworthy English collectors, including the 2nd Duke of Buckingham and the 1st Earl of Dudley.