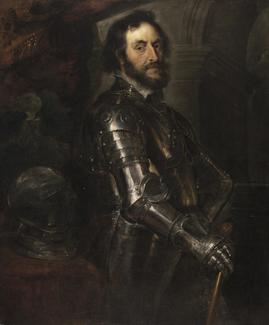 Thomas Howard, Earl of Arundel
about 1629-1630
Peter Paul Rubens
(Siegen, Germany, 1577 - 1640, Antwerp, Belgium)
Oil on canvas
Rubens was one of the most illustrious painters in the history of Western art. Perpetually on the road, he served four European rulers, including Charles I of England. Rubens painted this portrait of Thomas Howard, 2nd Earl of Arundel, at the height of his professional career. Because Arundel acquired art on a princely scale, he was given the nickname “the collector earl.”

Gardner herself paid a princely sum for this Rubens, making it her single most expensive acquisition after Titian’s Rape of Europa. Her art advisor Bernard Berenson, knowing that this painting would be another major addition to her collection, wrote to her, “you now have one of the great Titians; Arundel will be a match for it.”