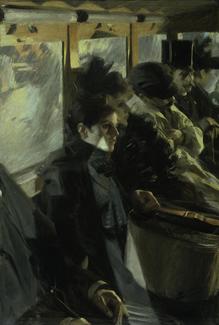 The Omnibus
1892
Anders Zorn
(Mora, 1860 - 1920, Mora)
Oil on canvas
Why was Mrs. Gardner so drawn to this work when she saw it in Chicago? It is a thoroughly modern painting: the subject is contemporary urban life — people sitting on a Paris trolley — and the style is Impressionist, although the Impressionists never really painted the dreary aspects of public transportation. Zorn depicts the isolation and sadness that comes with industrial progress, even as people are more crowded together.

It has been reported that Mrs. Gardner rode the streetcars of Boston, and thus could have identified with the well-dressed women riders. And, if a bit of speculation is allowed, the woman in the foreground, apprehensive yet eager, leaning and looking forward, mirrors the aspect of Mrs. Gardner at this moment in her life – about to embark on a serious career of collecting.