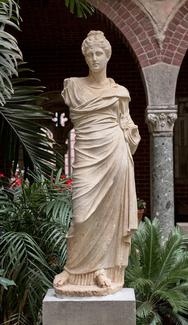 A Goddess (Persephone)
about 20 BC-50 AD
Unknown
Greek Island marble
The marble statue of a goddess, possibly Persephone, stands watch over the courtyard. Her left arm, now missing, may have held an attribute like a pomegranate. She was sculpted from Greek island marble during the first century B.C. or A.D., but she is draped in clothing typical of around 340 B.C., and has a 4th century B.C. hair style. This indicates that she is probably based on a Praxitelean funerary figure. Praxiteles was one of the most renowned sculptors in Athens during the 4th century B.C., and there are numerous Hellenistic and Roman copies by followers of the sculptor.