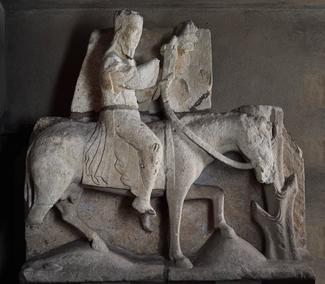 Christ Entering Jerusalem
mid 12th century
Unknown
Limestone
Medieval art occupied only the margins of American collecting taste at the turn of the nineteenth century. When Mrs. Gardner acquired these three sculptures in 1916, they were among the most impressive examples of monumental medieval sculpture yet seen in America. The acquisition helped establish Gardner at the forefront of medieval collecting, blazing a trail that William Randolph Hearst, Raymond Pitcairn, and John D. Rockefeller Jr. would soon follow.

Often compared to statues at Chartres, these sculptures from Parthenay (a town in Poitou) possess qualities that define twelfth-century religious art. Static yet vividly compelling, the monumental figures express the timelessness of Christian theology while evoking the realism of everyday life. Facial expressions are minimized, lending an imposing, otherworldly allure, yet the soft modeling of the lips, eyebrows and curling locks of hair suggests real human qualities. Their stately character befits the crowned personages portrayed: Christ, on his triumphant entry into Jerusalem, and the Elders witnessing the Revelations of the Apocalypse.

Controversy, too, lent the sculptures a certain notoriety. All came from the facade of a feudal lord’s courtly church, Notre-Dame-de-la-Couldre, a site long important to French patrimony. Their acquisition by no less a connoisseur than Mrs. Gardner launched a frenzy of interest in Romanesque Parthenay. Soon more sculptures flooded the market, including several removed illegally as well as some outright forgeries. Mrs. Gardner’s own dealer, Georges Demotte, was pursued in the Paris courts, where eventually a sculptor in Demotte’s service admitted embellishing several unspecified statues. Before the affair could be resolved, the sculptor was found dead, the victim of an apparent suicide; soon afterward, Demotte, too, was mysteriously killed in a hunting accident. These bizarre episodes caused suspicions about the Gardner sculptures to linger until the 1940s, when scientific analysis finally demonstrated that the lower halves of the Elders were forgeries, while the magnificent busts and the entire Entry into Jerusalem relief were authentic. Today there is no hesitation in counting these works among the most important Romanesque sculptures in America. They speak as much to the excellence of medieval carvers as to modern passions for the art of the Middle Ages.