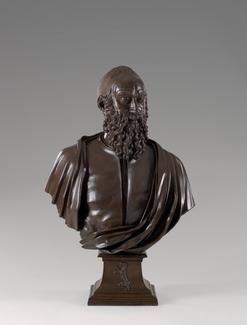 Bindo Altoviti
1549
Benvenuto Cellini
(Florence, 1500 - 1571, Florence)
Tin-bronze
Bindo Altoviti (1491–1557) was a prominent banker and art collector. An opponent of the Medici family, which had ruled Florence for generations, Altoviti spent much of his life in Rome where he became a wealthy banker to the popes. He eventually launched an unsuccessful revolt against the Medici.

The sculptor and goldsmith Benvenuto Cellini worked principally in Florence, but also in Rome and Paris. The bust is one of only two over life-sized portrait busts made by Cellini, and was praised by Michelangelo, who felt it was the equal of celebrated ancient Greek and Roman works. Isabella placed a self-portrait of Cellini’s rival, Baccio Bandinelli nearby.