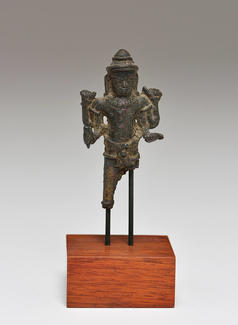 Vishnu
about 1200
Unknown
Bronze
This small standing Vishnu has four arms, two raised to the shoulders, and two held in front. A club is held in one of the lower arms. Though not especially impressive (parts of the legs are missing), this is one of the first pieces of Angkor sculpture to enter an American museum.1

Isabella Gardner was given two religious sculptures in Cambodia in 1883. She tucked a note into her Southeast Asian album that reads: “Vishnu from Angkor Thom. Little Vishnu and piece of native iron from the Camb. interpreter Mr. Hunter.” Her diary confirms that in Phnom Penh Hunter gave her a Vishnu (p. 256, presented November 22). The piece of iron is displayed in the same case in the Short Gallery of the Gardner Museum.