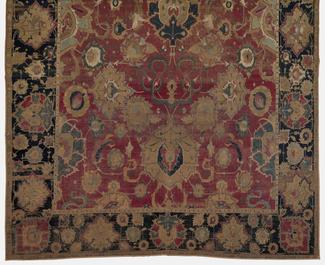 Carpet
17th century
Unknown
Wool pile on cotton foundation, 121 knots per square inch
Probably dating from the seventeenth century, this Persian (Safavid Isfahan) court carpet fills one of the Isabella Stewart Gardner Museum's most celebrated spaces.It depicts a two-layer arabesque of palmettes, vines, and curved leaves on a dark maroon ground surrounded by a border of palmettes and flowers on dark blue. This kind of design suggests a date in the seventeenth century. It originates in the Persian court workshops, which produced similar designs for textiles, stone-carvings, ceramics and manuscript illuminations.  Here it sets the stage for Titian's famous painting of Europa and provides the backdrop for a group of rococo armchairs made for Palazzo Borghese, Rome. Isabella Stewart Gardner purchased this magnificent carpet from Benguiat Brothers, London, for £350 on 21 July 1894, on the recommendation of her friend, the painter John Singer Sargent. He had tried unsuccessfully to make this carpet the background of his full-length portrait of Ada Rehan but, according to Sargent, "The picture... never came off. Whenever I put my model [Rehan] on it, she covered up something infinitely more beautiful than herself, so I gave it up and did a sort of map of the carpet for a pattern". Instead Gardner brought it back to Boston, eventually making it a defining feature of her museum's Titian Room.