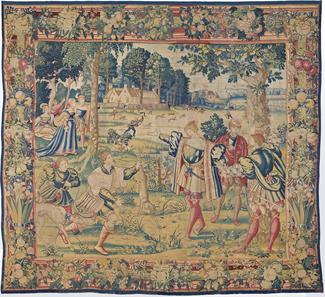 A Messenger from Harpagos Brings Cyrus a Letter Concealed in a Hare
about 1535-1550
Jan Moy
(active Netherlands, about 1525)
Wool warp (6 yarns per cm); wool and silk wefts
The five episodes in this set are based on the ancient Greek writer Herodotus’s account of the life of the founder of the Persian Empire, Cyrus the Great. In this tapestry, we see Cyrus as a young man (at right), receiving a letter hidden inside a rabbit. This secret message launched his empire


building, telling him the time was right to unseat his grandfather and claim his kingdom. The background for this drama is a bucolic landscape, with couples strolling and a hunt taking place. All of the figures wear fashionable clothing of the mid-16th century, making connections between


political scheming of the past and present. Flanders was the most important center for tapestry manufacture, the costliest of art forms. Because of their size and complexity, tapestries involved large amounts of skilled labor and expensive materials to produce. Often commissioned as a series, tapestries offered storytelling on a grand scale.