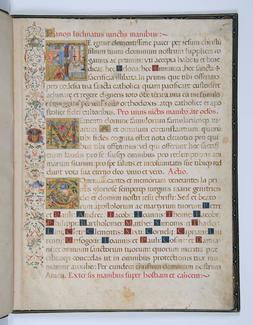 Leaves from a Missal
1523-1527
R. De Coverly
(London, born 1831)
Ink, colors and gold on vellum
This page comes from a Christian service book called a missal, one of the illuminated manuscripts commissioned by Pope Clement VII to celebrate Mass in the Sistine Chapel. The Latin text gives instructions to the priest. For instance, the opening line of this one – inscribed in red at the top of the page – reminds the celebrant to incline his hands as he begins this part of the service. Colors and symbols help to guide him through it. Ceremonial directions appear in red and small “+” symbols remind him when to make the sign of the cross.

This book went missing from the Vatican over two centuries ago, probably with the rest of the Sistine Chapel manuscripts. In 1798, looters likely removed it from the Vatican during the French occupation of Rome. Like many of the others, this one was cut into pieces and sold on the art market. Little is known of its journey from Rome to Boston, save for the fact that it turns up in London in the late nineteenth century. In 1904, Isabella Stewart Gardner purchased this fragment from her friend, the Harvard professor Charles Eliot Norton.