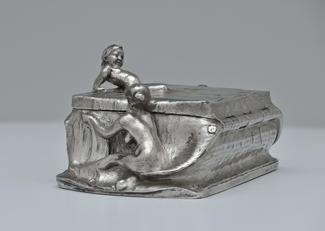 Soap Box
1897
Christian Eriksson
(1858 - 1935)
Silver (gilded interior)
Christian Eriksson studied in Stockholm, worked as a furniture maker in Hamburg, and then lived in Paris between 1883 and 1897 before returning to Sweden. He made portraits and large-scale sculptures for Swedish public buildings, including two monumental sandstone reliefs on the facade of Stockholm’s opera house (1907).

Much of Eriksson’s early work consists of small-scale vases and vessels in silver and bronze. This delicate hinged box shows a girl partly submerged in a stone tub – almost a travertine fountain. She ripples the water, an effect beautifully rendered in the worked surface of the silver. Two figures (her parents, according to Anders Zorn) decorate the sides of the tub. Playful in design and finely worked, the object combines Swedish themes with the spirit of Parisian art nouveau.

The painter Anders Zorn arranged for Eriksson to make the box for Mrs. Gardner. He may also have helped select the theme, since bathing was one of Zorn’s favorite subjects, and Gardner already owned Zorn’s painting of a mother and child bathing in a stream (p. 212). Zorn had earlier offered to make a jewelry box for Mrs. Gardner. Zorn’s completed object (Zorn Museum, Mora) is very similar in style and concept to Eriksson’s box, but Zorn was loathe to part with it, and Gardner never received it.