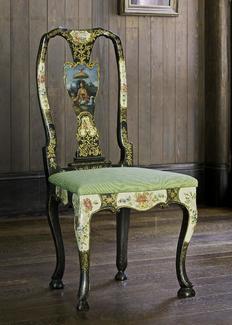 Chair (Sedia) Painted with Exotic Figures
2nd quarter of the 18th century
Unknown
Painted walnut
The slats on this set of chairs are delightfully painted with various figures in exotic ancient Middle Eastern, African, or Asian garb. Although painted furniture is often connected with Venice, the chairs possess an unusual mixture of stylistic forms and decorative designs, and may have been made in central Italy, perhaps Lucca or Rome.

Isabella Stewart Gardner first placed the chairs in her Chinese Room, where they accorded beautifully with the eclectic mixture of Japanese and Chinese objects, as well as nineteenth-century paintings.They are now arranged among painted cassone and altarpieces. Gentile Bellini’s Seated Scribe, displayed in the same gallery, strengthens the links between the arts of Italy and the East.