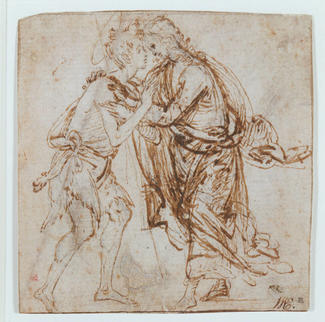 The Meeting of Christ and John the Baptist
about 1495
Filippino Lippi
(Prato, about 1457 - 1504, Florence)
Pen and brown ink over black chalk on hand-laid paper
The drawing depicts Christ meeting John the Baptist in the wilderness, an episode not found in scripture, but described in Renaissance biographies of the Baptist and sometimes found in paintings. Filippino Lippi shows a warm and tender embrace between two figures – a theme the artist greatly favored and employed in other narrative situations. Compared with the Baptist’s garb, Christ’s robes are much more fully shaded and detailed, which suggests that the drawing was made in part to explore problems of drapery. In fact, Giorgio Vasari praised Filippino’s unusual and innovative costumes.

Filippino Lippi’s reputation was at a peak around 1900, and both Isabella Stewart Gardner and Bernard Berenson considered acquiring a work by the artist to be among their highest priorities in building a collection. In 1903, she refused to pursue the tondo that belonged to the Warren family as she felt it ought to go to the Museum of Fine Arts, Boston (it ended up in Cleveland), and as late as 1922 there was again talk of buying a painting by Filippino.