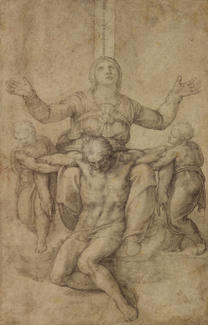 Pietà
1540
Michelangelo Buonarroti
(Caprese, 1475 - 1564, Rome)
Black chalk on paper
Monumental works of architecture, sculpture, and painting assured Michelangelo’s fame. He poured the same ingenuity into this small sheet, one of a select group of drawings made as finished works of art for esteemed friends. Michelangelo gave this one to the poet Vittoria Colonna, Marchioness of Pescara.


The pedigree of this drawing no doubt appealed to Gardner, who identified with powerful female collectors. Like the queen of Fenway Court, Michelangelo’s patron Colonna had no surviving children and a strong faith. The Dante quotation, in which Beatrice deplores how few appreciate the sacrifices of martyrs, offered another point of interest. Before 1915, Gardner displayed the drawing in her Long Gallery, a room which doubles as a chapel with a consecrated altar and a library. There, Gardner could study this intimate devotional image near her manuscript copies of Dante’s Divine Comedy, as well as a letter penned by Vittoria Colonna herself, which Gardner acquired in 1908.