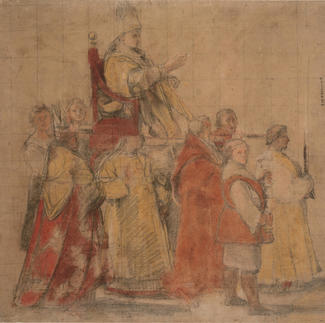 Procession of Pope Sylvester I
about 1516-1517
Raphael
(Urbino, 1483 - 1520, Rome)
Colored chalks on paper
The drawing depicts Pope Sylvester I (reigned 314–335) in the sedia gestatoria, the portable papal throne. He is being carried out to meet the Emperor Constantine on the occasion of the Donation of Constantine, in which the pope was given territorial possessions and broad powers. The subject, which illustrated an important source of papal authority, was chosen for a fresco in the Vatican.

Raphael used this drawing to develop the fresco’s composition. Each figure has been given clarity and weight, from the pope’s gesture of benediction to the several figures that turn to look out at the viewer. The paper has been squared for transfer: reproducing a design in a different scale is much easier when copying elements in the individual squares, rather than trying to copy the whole drawing at once. There are two sets of grid lines which go both under and over the design, suggesting that the drawing is just one step in an extended creative process. Raphael did not live to paint the fresco. His assistants, principally Giulio Romano, changed the motif considerably for the final painting in the Sala di Constantino.

Raphael’s use of colored chalk is unusual (he used it on only one other drawing), but highly effective. The artist reworked the position and pose of the figures in black chalk; several areas have been rubbed out and redrawn. The disposition of red, orange, and yellow throughout the composition allowed Raphael to work out the massing of figures and the overall color balance. This drawing is both documentary and beautiful: we witness Raphael’s creative thinking and working method.