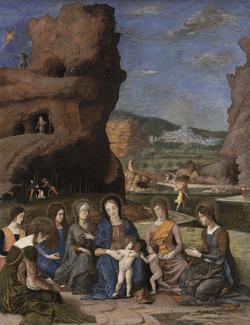 The Virgin and Child with Infant Saint John the Baptist and Six Female Saints
about 1497-1500
Andrea Mantegna
(Padua province, about 1431 - 1506, Mantua)
Tempera on panel transferred to canvas on masonite
Andrea Mantegna rose to fame at the Renaissance court of Isabella d’Este. Antiquity fuelled both their imaginations, and he gave form to her humanist ideas with his brush, reinterpreting standard Christian subjects in new ways. Mantegna signed this devotional painting for either Isabella d’Este herself, or an equally esteemed patron.

Gardner fashioned herself as a latter-day Isabella d’Este. A painting by her idol’s court artist lent this historical fiction new meaning. That Gardner did not acquire it from Bernard Berenson led the young art historian to opine, “But, oh, I do wish you had not bought it without consulting me.” Instead, Richard Norton pursued the painting for Gardner in Rome. Delighted by the picture, he inscribed on the reverse of the photograph he sent to Gardner: "first look at the draperies of the women on the left! And then the two little kids!"
Read More Read Less
Explore Object Details
00:00 / 00:00