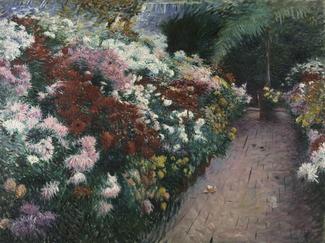 Chrysanthemums
1888
Dennis Miller Bunker
(Garden City, New York, 1861 - 1890, Boston)
Oil on canvas
Bunker made this picture after returning to Boston from a summer spent in England painting with John Singer Sargent. Sargent and Bunker had been experimenting with Impressionism, and under the influence of Claude Monet, they worked outdoors and used a bright palette applied in broken brushstrokes. Bunker struggled at first and complained to Mrs. Gardner that he had “ruins of numerous works, for I’ve not been idle,” but he continued with the style. Bunker adopted elements of Impressionism in this painting of blooming flowers in the greenhouse at Green Hill, the Gardners’ summer residence in Brookline.

Despite the painting’s importance as one of the earliest examples of American Impressionism, Mrs. Gardner was not much interested in Impressionist landscapes. In the early 1890s, John Singer Sargent alerted her to the upcoming sale of a famous Monet painting, but she never pursued it. She acquired portraits by Degas and Manet, and in 1906 visited Claude Monet at Giverny, an event she found “perfect in every way.” She was aware of contemporary art movements: she lent pictures to the 1893 World’s Columbian Exposition in Chicago and even served on the organizing committee of the 1913 Armory Show. One must conclude that Bunker’s work appealed to her more for its subject and personal associations than for its style.