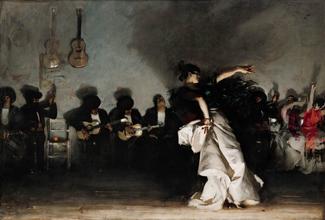 El Jaleo
1882
John Singer Sargent
(Florence, 1856 - 1925, London)
Oil on canvas
Sargent’s monumental painting, based on drawings he made in southern Spain in 1879, is named for an Andalusian dance and is roughly translated as “the ruckus.” This is a painting you can hear as well as see: heels clicking, fingers snapping,hands clapping, the sounds of singing and guitars.


Isabella Gardner’s elaborate setting for this painting features an alcove defined by a Moorish arch.The mirror on the left seems to extend the space, and the everyday objects placed casually on the floor in front continue the illusion that viewers are part of the painted scene—we have wandered into the tavern and become the audience for the performance.


The idea for this dramatic installation dates from 1914, when Gardner decided to remodel this side of the museum. She replaced the two-story music room that originally occupied this space with three galleries on the first floor (the Spanish Chapel, Spanish Cloister, and Chinese Loggia) and the spacious Tapestry Room on the second floor. Remarkably, El Jaleo didn’t even belong to Gardner at this point—it was owned by her relative through marriage, T. Jefferson Coolidge. When Coolidge saw the extraordinary custom-made setting, he apparently gave her the painting on the spot.