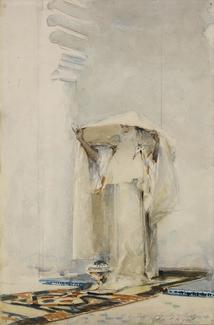 Incensing the Veil
1880
John Singer Sargent
(Florence, 1856 - 1925, London)
Watercolor on paper
This copy of an earlier oil painting (Sterling and Francine Clark Art Institute, Williamstown, MA) is inscribed to Sargent’s friend Samuel Pozzi, who assembled one of the most important collections of Sargent’s work. Isabella Stewart Gardner purchased it after Pozzi’s death. The picture shows a Northern African woman inhaling the smoke of ambergris burning in the small brazier in front of her. The sweet-smelling incense was believed to ward off evil spirits and also served as an aphrodisiac.