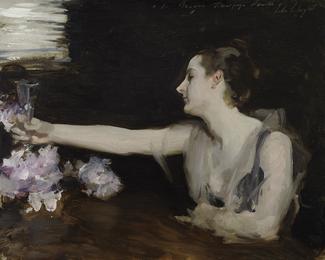 Madame Gautreau Drinking a Toast
1882-1883
John Singer Sargent
(Florence, 1856 - 1925, London)
Oil on panel
Madame Pierre Gautreau, born Virginie Avegno (1859–1915), was Madame X, the statuesque sitter in Sargent’s most notorious portrait (Metropolitan Museum of Art, New York). Critics considered the portrait in scandalously bad taste, and the sitter’s mother asked Sargent to withdraw the painting from the Salon of 1884, which he refused to do. This much smaller and more intimate painting was done a year earlier, and was given by Sargent to Madame Gautreau’s mother. By purchasing this painting at the end of her life, Mrs. Gardner acquired an important document of Sargent’s career, and also a slice of her own history, since she had wanted her portrait by Sargent to rival the sensuous impact of the infamous Madame X.