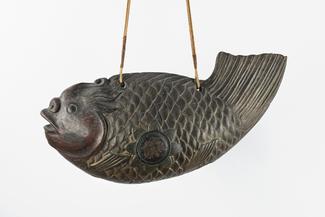 Gong (Ho): Fish
mid 18th century
Ryozan
(active Japan, mid 18th century)
Gesso on oak
In Zen Buddhist temples across East Asia, wooden gongs like this are used to let monks know that it is time to complete certain tasks. Historically, these gongs have often been sculpted into the shape of a fish—like this one from eighteenth-century Japan. While we currently know little about this object's history before Isabella purchased it from the collection of a Japanese art dealer, we do know the name of who created it: its inscription reads "Ryozan saku,” which means made by Ryozan.