Danijel Žeželj spent the month of April 2004 working and drawing in the Carriage House apartment. He photographed the galleries, where he was especially interested in the changing mood and light of the Museum’s spaces. Žeželj examined several books, including a volume of Dante Alighieri's Divine Comedy with woodcut illustrations and commentary, The Little Passion with 38 woodcuts by Albrecht Dürer from about 1500, and an edition of Japanese woodcut comic books from about 1900, all of which are housed in the Long Gallery. He also wandered around Boston collecting materials on video and in photographs for future drawings and films.

In the months following his initial residency, Žeželj created several projects for the Museum, including The Hunger Artist, a multimedia performance based on a short story by Franz Kafka that combined Žeželj’s projected still and video images with live and recorded music, sound, and narration in the Tapestry Room. Small Hands, another project, was a live painting and music experience performed in the Museum’s outside gardens during Neighborhood Nights.

In June 2005, Žeželj returned to install Stray Dogs, an exhibition of original pen and ink drawings for his new graphic novel. Chapter 7 (Princess) told the story of a museum that had gone into a self-lockdown during a war. The staff stayed to protect the collection and survived by growing food in the covered central courtyard. The illustrations directly referenced the many photographs Žeželj had taken during his stay. During the exhibition, the artist invited poet Charles Simic to do a reading of his poetry in the gallery. At the close of the show, the Museum launched a microsite to archive the exhibition and to showcase Žeželj's work.

Danijel Žeželj also worked with sixteen eighth graders at Boston Latin School with a focus on portraiture. The students used examples from the Museum’s collection to discuss why portraits are made, the expectations of the patron, and how artists make decisions about how to portray and position the figure, and how to use light, contrast, and background details to convey the attributes of their subject. They chose their subjects and began to collect images, text, and other materials for the project. Žeželj showed various examples of modern and contemporary works that use collage and assemblage, and led drawing activities that emphasized proportion and scale. On the final day, he gave each student a copy of Stray Dogs.

In June 2010, Žeželj held a performance and mini-exhibition in the Special Exhibition Gallery called Once, a dynamic act of live narration that used sound and images as the language of expression. The performance was built on an interchange between painting and music. Žeželj transformed the canvas over and over again in front of the audience accompanied by rhythms performed by Jessica Lurie (saxophone and voice), Todd Sickafoose (base), and Marika Hughes (cello). The painting’s progress was documented by still photography and edited with the music into a video. The next day, the video was installed alongside the final rendering of the painting and remained there for three days. This was the last work to be shown in the Special Exhibition Gallery in the Palace building. 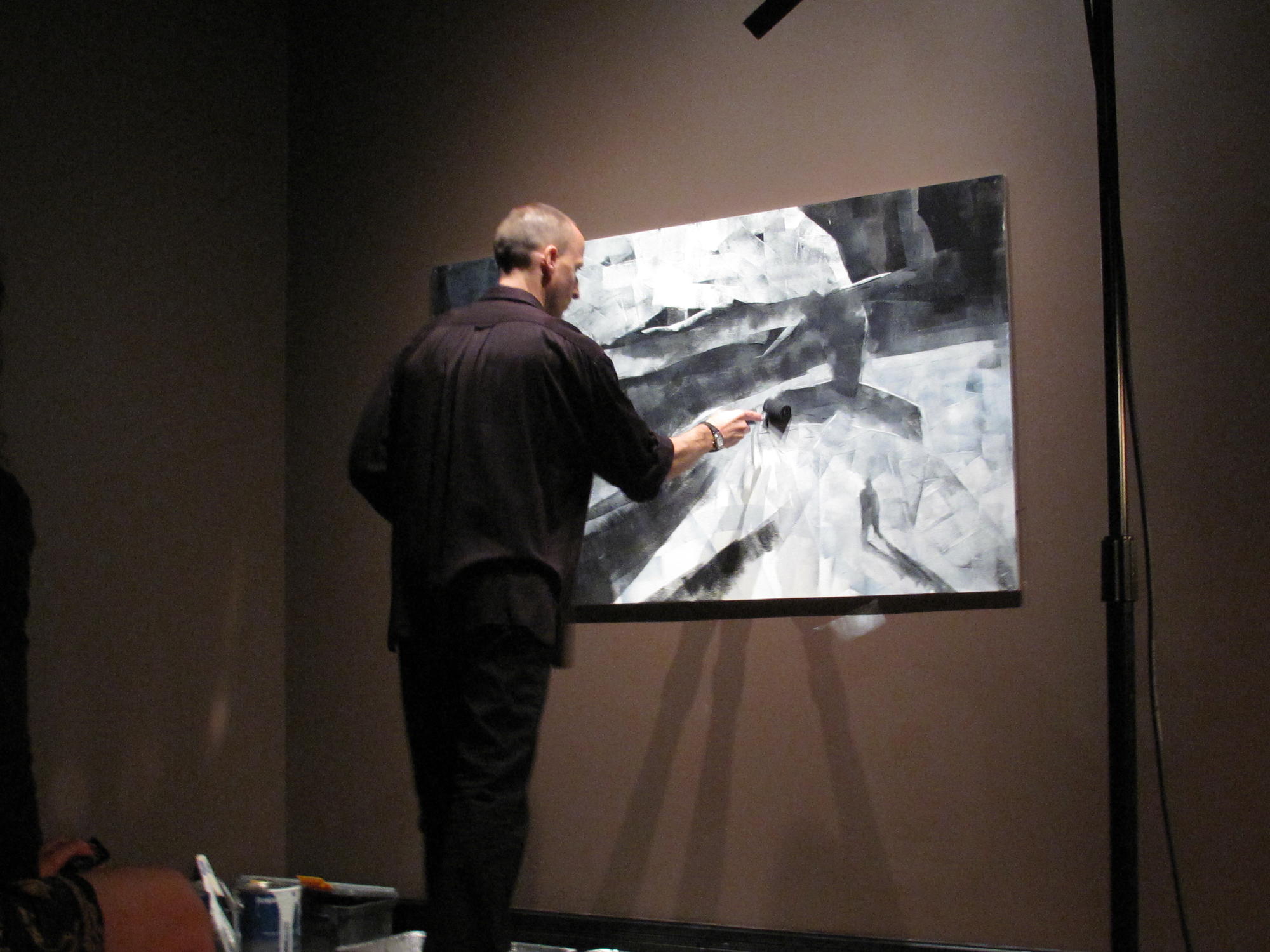 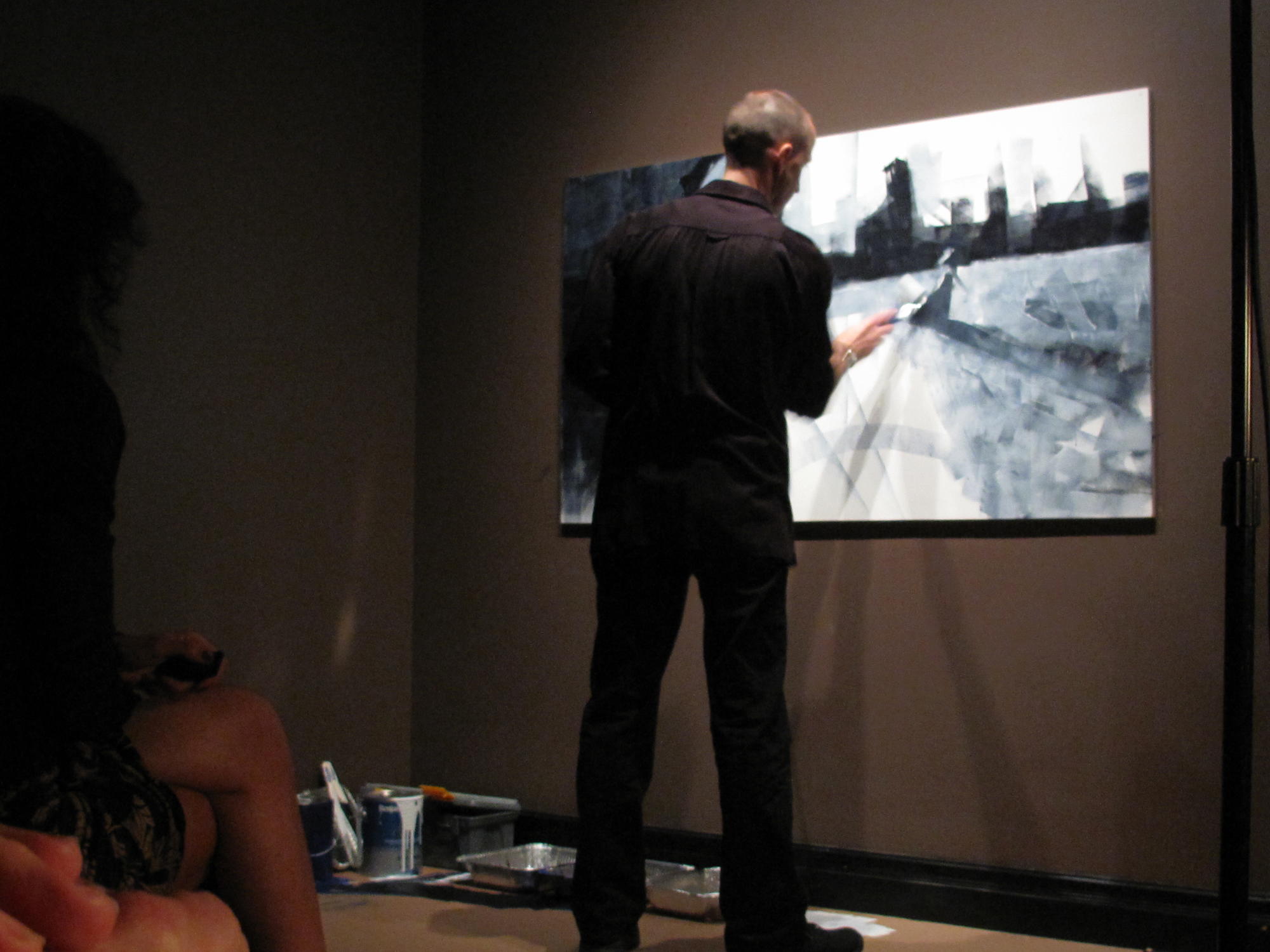 Danijel Žeželj (b. 1966, Croatia) started publishing comics during his first year at the Academy of Fine Arts in Zagreb and is now the author of more than twenty graphic novels, short comics collections, and fine animation movies. Danijel lived and worked in the U.K. and Italy before moving to the United States in 1995. His illustrations and comic stories are poetic and examine the darker side of life, reflecting his comfort in a Kafkaesque world. Žeželj’s art speaks in a language easily understood and appreciated by a younger generation. Žeželj's work has been published by DC Comics/Vertigo, Wild Storm, Marvel Comics, Dark Horse, Dargaud, Hazard, Mosquito, The New York Times Book Review, Harper’s Magazine, Grifo Edizioni, Edizioni Hazard, and Washington Chronicle. Since 1997, he has created a series of multimedia performances merging live painting and live music. These works have premiered in Italy, France, Netherlands, Germany, USA and Croatia. In 2001 he founded a publishing house and graphic workshop, Petikat, in Zagreb, Croatia. Žeželj lives and works in Brooklyn and in Zagreb.