Raqs Media Collective comprises independent media-practitioners Jeebesh Bagchi, Monica Narula, and Shuddhabrata Sengupta. The group has been described as artists, curators, researchers, editors, and catalysts. During their residency in 2010, Raqs explored the Museum’s engagement with time. They wandered frequently in the galleries, where they came across two Chinese Han Dynasty mat-weights in the shape of bears. These objects served to weigh down floor mats on which, many centuries ago, debaters would sit and argue philosophical points or play games. Another work that captured their attention was a seventeenth century screen, Three Vinegar Tasters. As the artists’ work often unpacks questions of identity, location, myths, and histories, it was not a surprise that these objects resonated with them.

Raqs poured over books from the collection with Anne-Marie Eze, a Curatorial Fellow specializing in manuscripts. They were introduced to a series of Japanese fairy tales for children, several Books of Hours, Dante Alighieri's Divine Comedy with commentary by Cristoforo Landino, and a copy of The Divan of Hafiz.

The artists were also interested in Isabella's textiles and tapestries. They met with textile conservator Tess Fredette to view several pieces, including a Bengali wall hanging of a triumphal arch from the mid-17th century. The group also made trips to the grounds of the old Brookline greenhouses the Museum used between 1926 and 1972 to cultivate and grow plants for the Courtyard, as well as the site that was being used at the Honeywell Estate in Wellesley.

The highlight of their residency was their Flashlight Tour. Exploring the Museum by flashlight at night, the Raqs members were struck by how faces, bodies, mythical beasts, birds, and monsters seemed to float and hover in the erratic beam of their flashlights. The objects that were so anchored by day seemed to come alive at night. The darkness set them free to float and fly.

In the fall of 2013, Raqs returned to the Gardner to install three new works in the Hostetter Gallery that explored the different narratives and experiences the group encountered while in residence. Raqs positioned The Vinegar Tasters screen from the historic galleries over The Great Bare Mat, a square carpet of their design. The carpet’s repeated motif was created by overlaying the constellation Ursa Major—which translates to “Great Bear”—onto a drawing that traced the exchange between the three computers of the Collective and the outside world over one hour’s time. During the exhibition, the carpet was transported to Calderwood Hall, where it was used as a platform for a series of debates and conversations moderated by Raqs around four questions that kept surfacing during their residency: Where does nostalgia take us?, What does intelligence do for us?, What does accumulation do to us?, and Why does music move us?

The work in the second gallery conjured the experience of being enveloped by the Museum at night. Archetypes and Other Permissive Forms was comprised of 12 acrylic sheets and etched aluminum figures taken mainly from the Museum’s tapestries. The sheets were installed several inches away from the wall so that the shadows cast by the figures became an element of the work. The aluminum also reflected the colors and light from Equinox, a large single-screen, animated video suspended on other side of the gallery, which silently brought to life various creatures from Gardner’s collection of Japanese fairy tales, textiles, and photographs taken by Raqs during their stay. 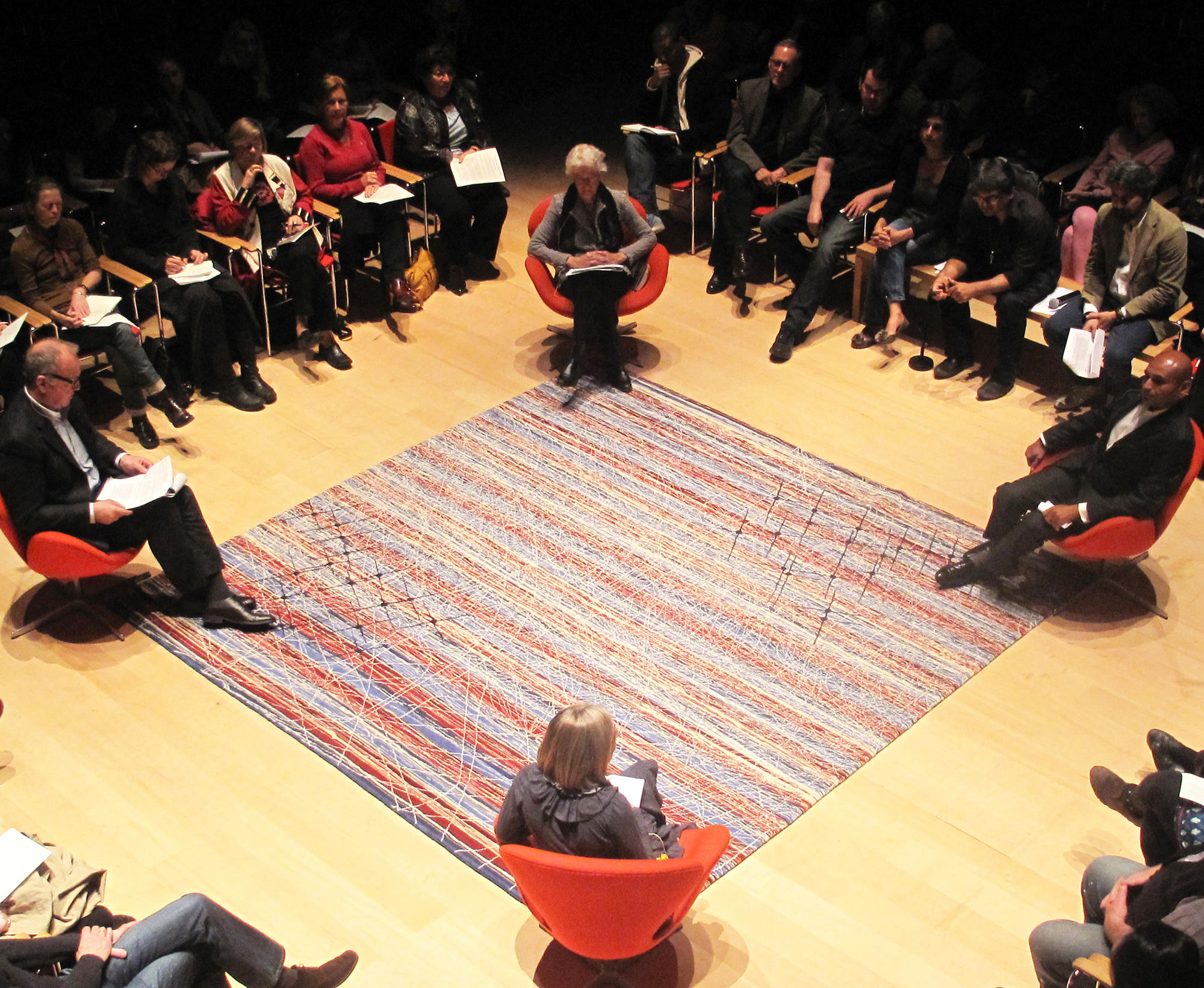 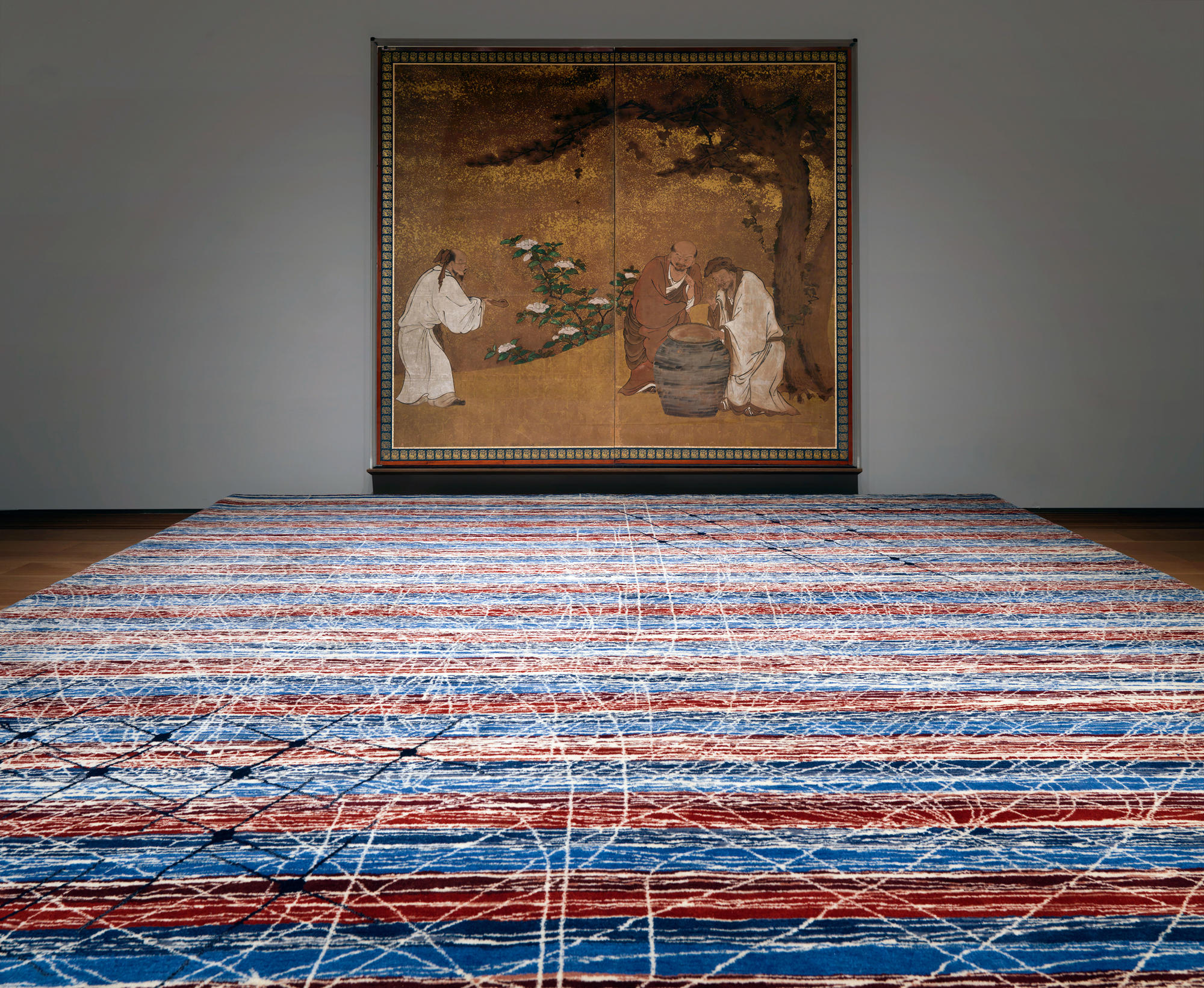 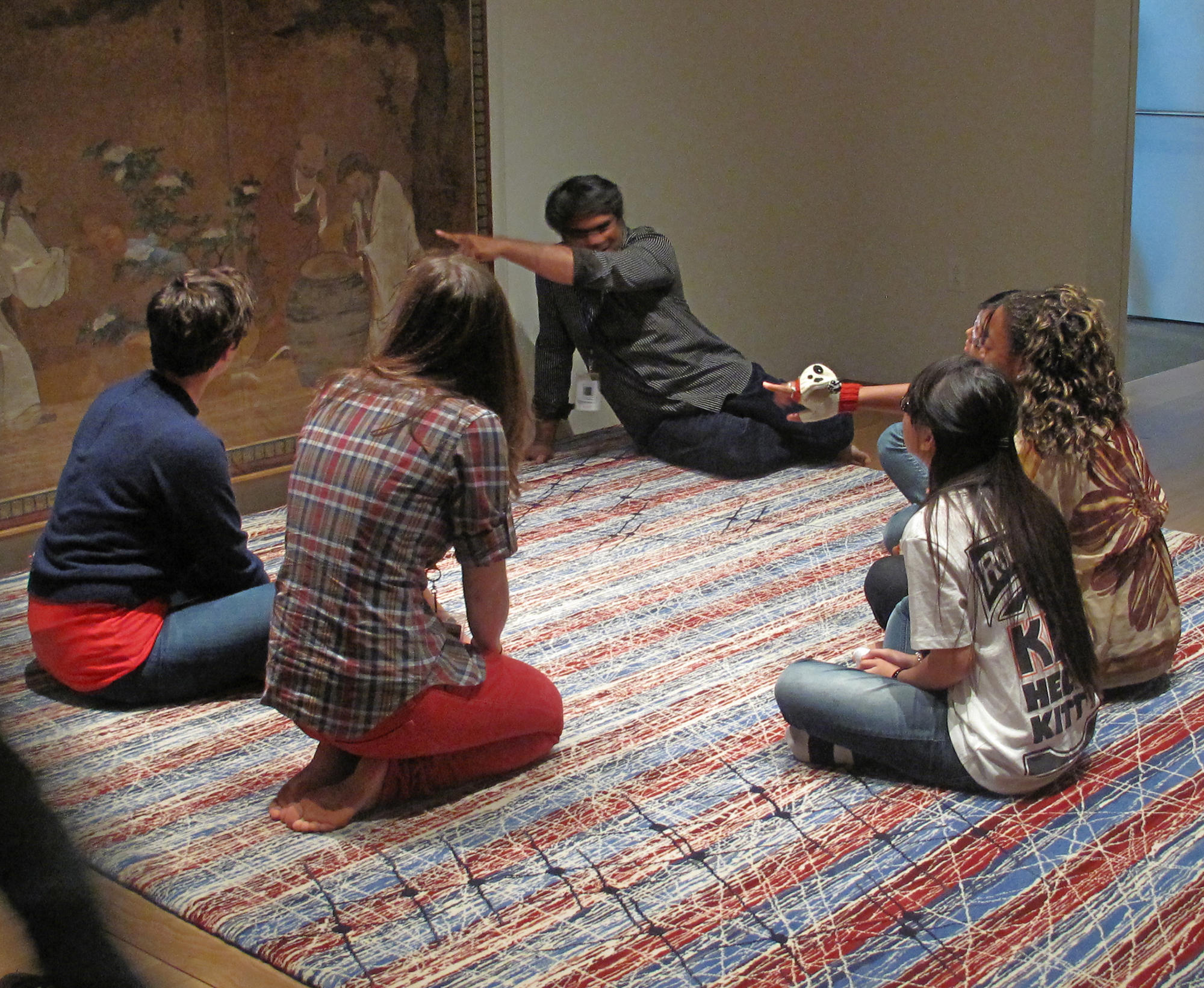 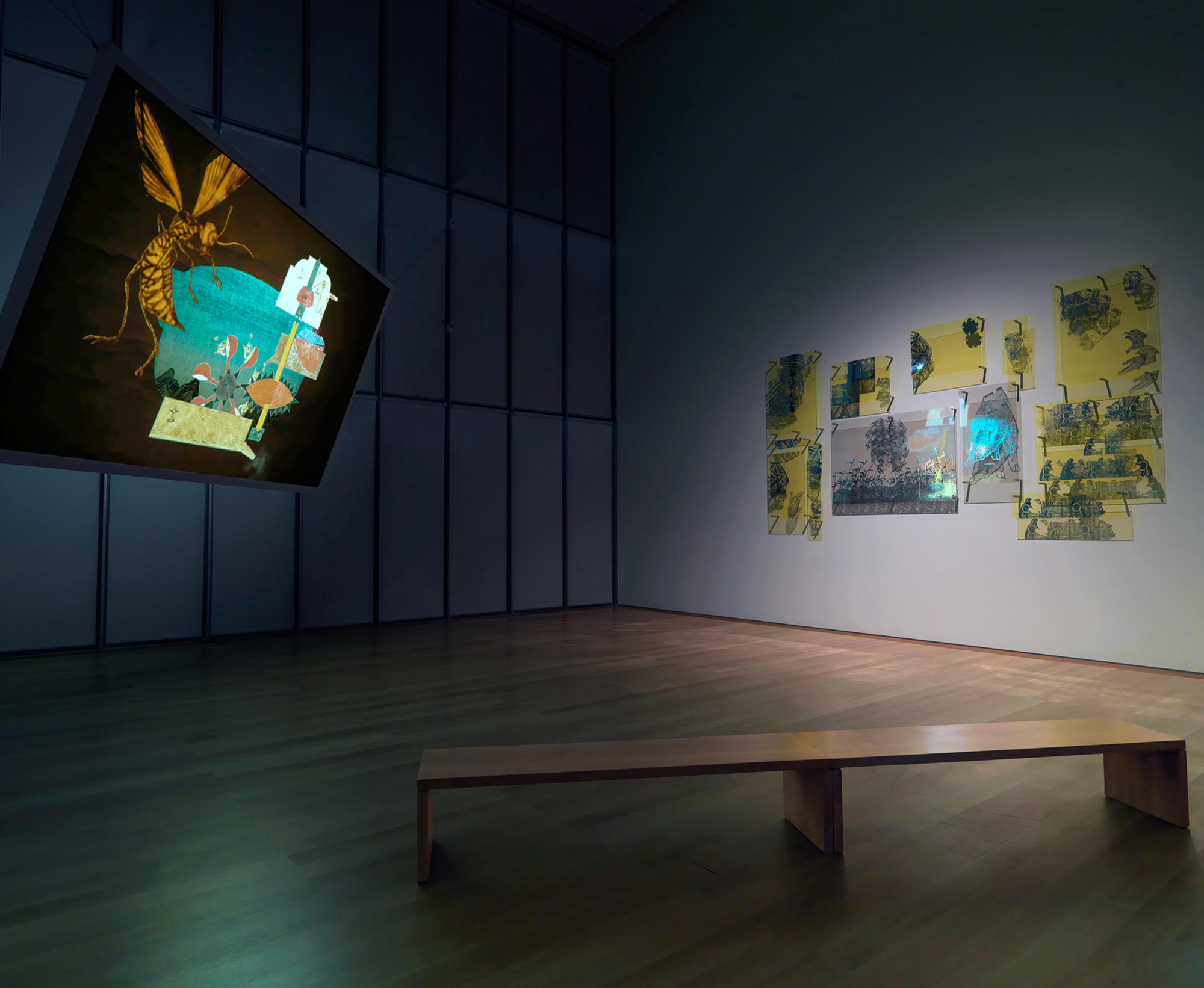 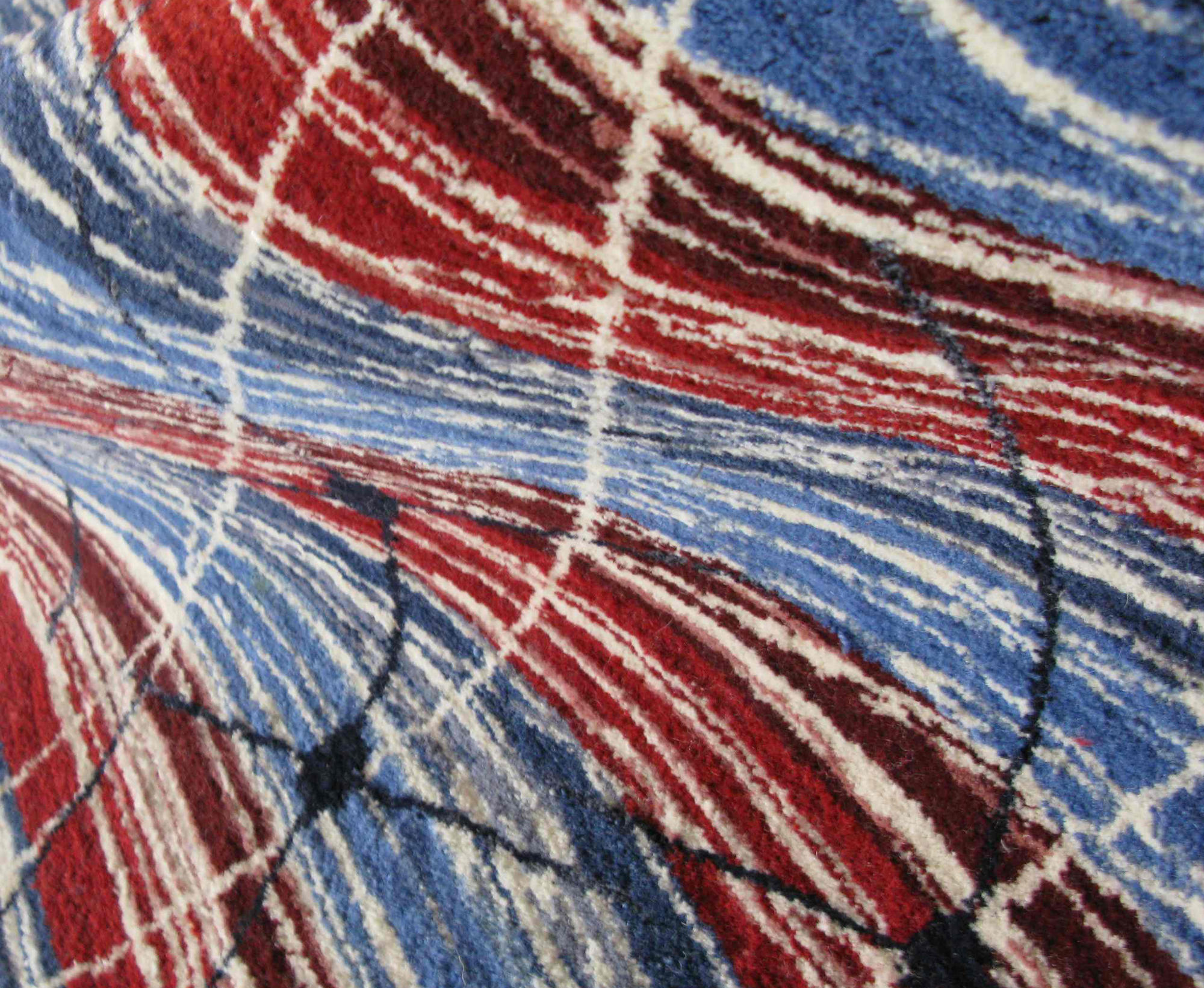 Raqs is a word in Persian, Arabic, and Urdu, and means the state that "whirling dervishes" enter into when they whirl. Raqs signifies and embodies the practice of a kinetic contemplation of the world. It is also a word used for dance.

In 1992, independent media-practitioners Jeebesh Bagchi, Monica Narula, and Shuddhabrata Sengupta formed the The Raqs Media Collective. In 2001 they co-founded Sarai at the Centre for the Study of Developing Societies (CSDS) in Delhi, where they coordinate media productions, pursue and administer independent research, and also work as members of the editorial collective of the Sarai Reader series. For Raqs, Sarai is a space where they have the freedom to pursue interdisciplinary and hybrid contexts for creative work and to develop a sustained engagement with urban space and with different forms of media. Their work, which has been exhibited widely in major international spaces and events, locates them squarely among the intersections of contemporary art, historical enquiry, philosophical speculation, research and theory—often taking the form of installations, online and offline media objects, performances, and encounters. Raqs has curated exhibitions at Manifesta and the Shanghai Biennale. Their work has been exhibited at Documenta, the Venice Biennale, Manifesta, and the Istanbul, Shanghai, Sydney, and Taipei Biennials. A survey of their work, With an Untimely Calendar, was held at the National Gallery of Modern Art, New Delhi, from 2014–2015. They have also had solo exhibitions at Tate Exchange, London; Foundacíon Proa, Buenos Aires; Laumeier Sculpture Park, St Louis; and the Whitworth Art Gallery, Manchester. They are based in Delhi.